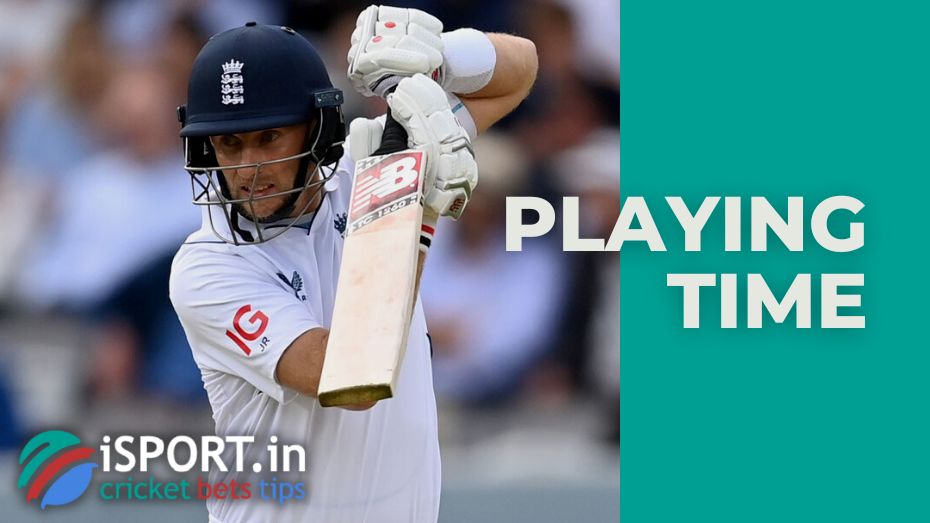 There is a time limit during which a match lasts in any sport. For example, it is fixed (plus a little extra time) in football. Somewhere, like in MMA fights, it lasts either a limited time or until one of the fighters wins. Cricket also has its time limits, which mainly depend on the format of the meeting.

The playing time plays an important role in cricket, has many nuances, limitations, etc. To understand this sport, you need to know everything about the time during which the match lasts. In our article, you will read about all the nuances associated with playing time, and you will be able to enjoy more cricket and make more successful bets.

Before starting to understand all the nuances of the playing time, you need to give a short definition of this term. We tried to formulate it as succinctly as possible.

Cricket playing time is the time during which a cricket match lasts.

Immediately, we note that the playing time in cricket is one of the longest among all sports because one match can last for several days. Sometimes rallies, cycling competitions, yachting, etc., but these are rather rare exceptions.

How long can the playing time last? It all depends on the format of the matches. We list the main points:

The full playing time rules in cricket are set out in Laws of Cricket №. 11 and 12. There are detailed all the reasons why a match lasts a specified period.

Now let’s talk about some of the nuances, taking into account which cricket matches are organized and what factors are used to determine the playing time.

To begin with, cricket is only played in dry weather. Also, because balls often fly at a speed of about 130 kilometers per hour in first-class cricket, the game must be played with sufficient lighting so that the batsman can see the ball flying at him and react to it in time. Due to this, the Playing time is adjusted when it is raining, or there is not enough light.

Some one-day and test matches are played under floodlights, but this trend has only recently started. The first day/night match was played between Australia and New Zealand in Adelaide in November 2015. It was very successful, so it was decided to continue planning matches in this format.

Also, the formation of the playing time and the location of the games are influenced by the time of the year. So, games are held in the summer in England, Australia, New Zealand, South Africa, and Zimbabwe. In the West Indies, India, Pakistan, Sri Lanka and Bangladesh – in winter. The beginning of the Playing time is usually around 9:30 – 11:00. The end of the match is at dusk.

Playing time: start and end of the match

The start of a cricket match is when the referee shouts “Play”. The same word is used to restart the game after a break. Before the break or at the end of the match, the referee says “Time” and removes the bails from the wickets. The bowling alley can no longer appeal for dismissal after the word “Time” is pronounced.

When is the playing time considered complete? Let’s talk about the main points:

However, these points can be clarified. You can read about all the nuances in the full rules of cricket.

As you already understand, cricket is a game with a very long playing time. It means that there are mandatory breaks.

In connection with what they can be introduced? Let’s figure it out:

Often all the intervals that occur in the game (in particular, the intake of food and drinks) are agreed before the start of the game. Interestingly, under conditions of a match at a high temperature (from 40 ° C), the intervals between drinks cannot last more than 5 minutes to preserve the athletes’ health.

Finally, an interesting fact. The record for the longest playing cricket belongs to the Blunham club of Bedfordshire in the East of England. The club members played cricket for 168 hours (from 24 to 31 August 2019). There was no longer playing time in the history of cricket as of 2021.