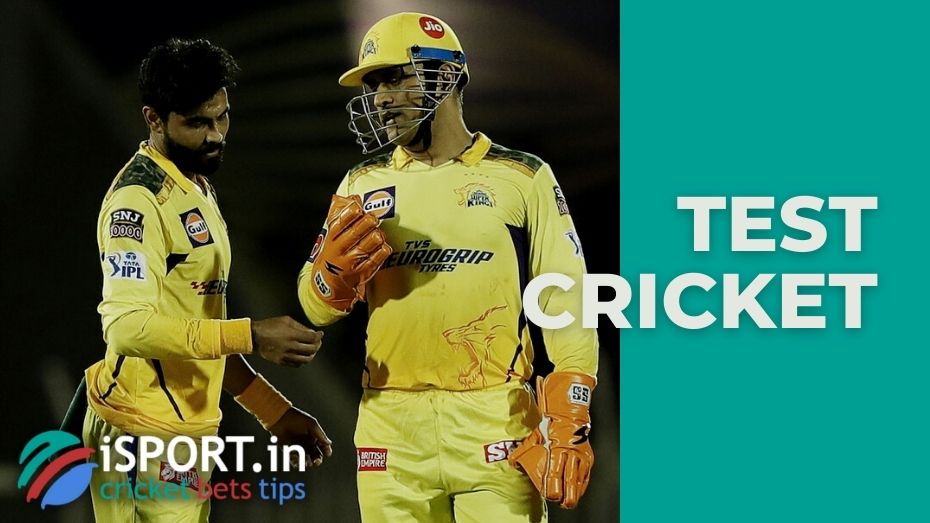 Test cricket (also Test match) is the cricket format with the longest duration of matches. It is considered a kind of benchmark since only teams with the appropriate status granted by the International Cricket Council can take part in test matches. The name of the format is associated with its exactingness since grueling test matches are a real challenge for players and, at the same time, a test for both physical and psychological stability.

Test cricket (also Test match) originated in the 18th century, but the teams were not sufficiently representative to talk about the format’s entering the international level. The first match between the countries’ teams (USA – Canada) took place at the end of September 1844. However, it was not named a test one either. Around the same time, the English national team began touring the United States, Australia and New Zealand. England was visited by the first organized national team composed entirely of Australian Aborigines in 1868.

In the second half of the 70s of the XIX century, the British organized two outbound tours to Australia – amateur and professional. The first was not successful, so it was the team of James Lillywhite, who led the professionals, that is considered the nominal debutant of the full-fledged Test cricket. The first official Test match took place on March 15-19, 1877 at Melbourne Cricket Ground; the national teams of Australia and England took part in it. The first was won by the Australians, who made a gap of 45 runs, the second – by the metropolis team.

1882 marked the beginning of one of the most famous international series – The Ashes. In 1884-1885, it was officially extended to five matches per hour and three seasons later. The South African national team tried their hand at a test format.

Despite the consistent development of the Test cricket (also Test match) format, the issue of statistics has remained unresolved for a long time. Ultimately, it was decided to attribute it to first-class cricket. However, unlike the actual first-class matches, test ones are entered not in one but in two final protocols (directly in the test plus first-class). In addition, in some cases, the ICC makes exceptions, adding a particular match to the statistics or, on the contrary, deleting it from there: for example, in 2005, it was decided to include in the test statistics a six-day Super Series match, in which the national teams of Australia and World XI took part.

In October 2012, the International Cricket Board approved a series of organizational amendments allowing for day-night test matches. The first game of this kind started on November 27, 2015 and ended in December 1; the national teams of Australia and New Zealand took part in it.

Test cricket (also Test match) is actually the most prestigious level of competition, for participation in which the so-called test status is required, awarded to the national team directly by the ICC decision. Currently, only twelve national teams have it:

* from 1970 to 1991, South Africa was barred from active participation in the Test cricket (also Test match) in connection with the protests of the world community against the policy of apartheid.

** The Zimbabwe national team did not participate in the test competitions from 2006 to 2011. The reason is extremely low performance.

Nine national teams from this list represent sovereign countries; the English team – England and Wales proper, the West Indian – fifteen countries and territories of the Caribbean, the Irish – Northern Ireland and the Republic of Ireland.

Two teams of eleven players each take part in a standard Test match. The game lasts four innings and can stretch over five days, so the outcome of such matches depends not only on the individual professional skills of the participants but also team interaction level.

Everyday Test cricket (also Test match) consists of three sessions of two hours each with breaks (40 minutes for lunch and 20 for tea). At the same time, both the sessions themselves and the intervals between them may vary depending on the circumstances. For example, if time is lost due to bad weather, it may be compensated by extending the session, and the tea break may be postponed if the batter is nine wickets behind. Often, changes affect the last session, especially if the teams did not manage to use all the overs.

Nowadays Test cricket (also Test match) takes five days. However, this was not always the case: for a long time, a standard gaming session lasted four days plus a day of rest (that is, Sunday). At the same time, the so-called Timeless Tests, which did not imply strict time limits, were not uncommon. However, since the 1970s, the ICC began to streamline statistics, so the question of including a particular four-day match in the official statistical protocols was considered separately. The growing popularity of the limited-overs format put sports officials in front of the need for reforms, so at the beginning of the 2000s, a proposal was made to return to the previous (four-day) schedule. As a result, the ICC made a compromise decision, proposing to host the 2023 World Cup in the old format.

Before the start of the Test cricket (also Test match), a mandatory draw is held, which determines the order of the serve. The winning captain decides whether his team will serve first or, on the contrary, will start with a tackle (if the second option was chosen, it would be entered on the scoresheet as Team B, and the servers as Team A). At the end of the inning, a change of position occurs; the final victory is awarded to the team with the most runs.

A team inning can be completed under the following conditions:

If, after the first inning of Team B, Team A is in the lead by at least 200 runs, the second captain may require opponents to play their second inning. Typically, the third and fourth innings are reversed in situations like this, meaning Team A bounces on the fourth. If, during the Test cricket (also Test match), due to bad weather or insufficient lighting, the whole day was lost, Team A can submit a similar request, but only on the condition that Team B is at least 150 runs behind.

After the completion of the 80 compulsory overs, the captain has the right to claim a new ball. Although this amendment is not strictly mandatory, it is used quite often, especially if fast bowlers are the main part of the field team. On the other hand, Spin bowlers prefer not to change the shell since light wear is only on their hands.

Test cricket (also Test match) can complete according to one of six scenarios:

Test cricket (also Test match) is mainly held within the series, where one team acts as the host and the other as the guest. With the growing popularity of the limited-overs format, ICC proposed a new option: now all teams with test status play with each other for a six-year cycle, and the one with the highest number of points wins the final trophy. At the same time, it was decided to preserve the historical test series, in which the following pairs of national teams take part:

Interestingly: The title of the oldest test series, The Ashes, literally translates to “Ashes”, which is related to a pun that was published in the English press after the Australian victory at The Oval in 1882: “The body shall be cremated and the ashes taken to Australia”. It is noteworthy that the main trophy of the competition is in the form of an urn for ashes.