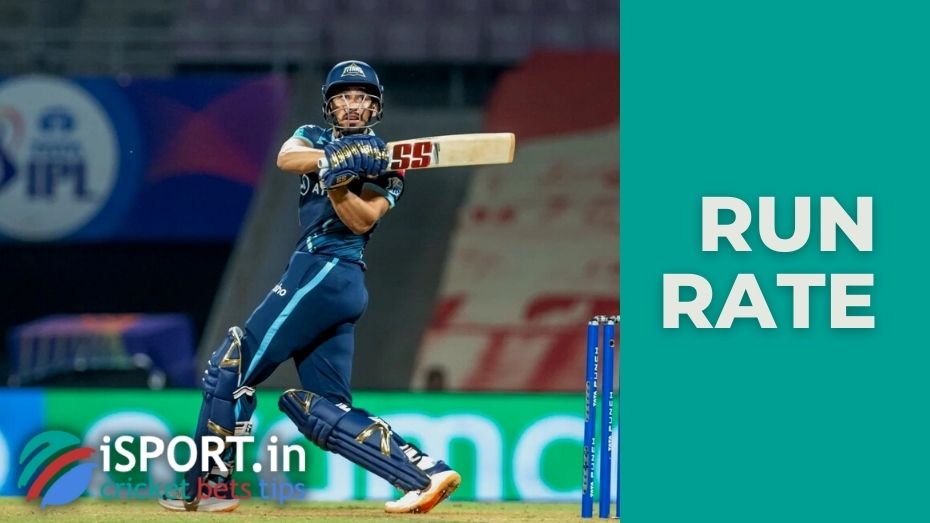 Run rate – in the broadest sense of the word, the average of the runs scored by the batting side in one over. Includes both the runs made by the batsmen and the Extras awarded to the batters (that is, additional runs that were earned due to a violation of the rules by the attacking side).

It should be borne in mind that the Run rate indicators may vary significantly depending on the format of a particular match. So, for example, lower speeds are typical for test games, so currently, the average number of runs here ranges from 3-3.5. On the contrary, in the limited overs format, players are strictly limited by time frames and therefore strive to score points as quickly as possible. Therefore, if in the 70s the Run rate in ODI started from 4, now the average is considered to be 5, excellent – 7-8.

In T20I, the Run rate is from 8 to 9 runs per over. Historically, the recorded maximum did not exceed 13-14 runs per over, and yet this makes this format the fastest in terms of a set of runs. The ideal score – 36 – has never been achieved since this implies a one-hundred-percent hit on each ball with the complete absence of mistakes by the batting side.

In the second of the mentioned formats (that is, limited overs) the Run rate is necessary primarily for the correct comparison of the actual number of runs scored and the number of runs needed to win the match. As a rule, the team strives to increase this indicator as much as possible in the last overs, but the current Powerplays aim to level the indicators in the starting and ending innings.

Before the advent of the so-called Duckworth-Lewis method, the Run rate was one of the main criteria by which the winner of a match was determined (primarily in cases when the game was interrupted or not completed due to bad weather or insufficient lighting). In addition, the Run rate is still used for a clearer distribution of places in the standings if, for example, two teams are equal in the number of wins and losses.

The following terms are often associated with Run rate:

The Required run rate refers to the missing number of runs that the batting team must score to win the match (or the total number of runs that the batters must score, divided by the remaining number of overs). As a rule, the Required run rate is displayed on the scoreboard closer to the end of the game, that is, in the second inning in the format of limited overs and in the fourth – in test competitions.

Net run rate is a counting method that is most often used in the format of limited overs to identify the winner, provided that the teams managed to score the same number of points. It is partly similar to the method of determining the strongest in the conditions of a goalless draw in football.

Interestingly, many people consider the Net run rate to be a difficult indicator to understand, which also does not allow you to get a fair idea of the game level of a particular team. On the one hand, the higher it is, the better, but at the same time, this state of affairs speaks primarily about the good work of the bowlers and not about how successful the team as a whole is.

As for the Economy rate, it is used primarily to evaluate the effectiveness of bowlers, not batsmen, since it represents the average number of runs conceded per over. In fact, this indicator allows you to get an idea of how many runs the attacker gave to the opponents, so the lower it is, the better his statistics are.

This is interesting: The top of the Run rate in ODI is held by the New Zealanders. The West Indies national team is in second place, and the British are in third place.