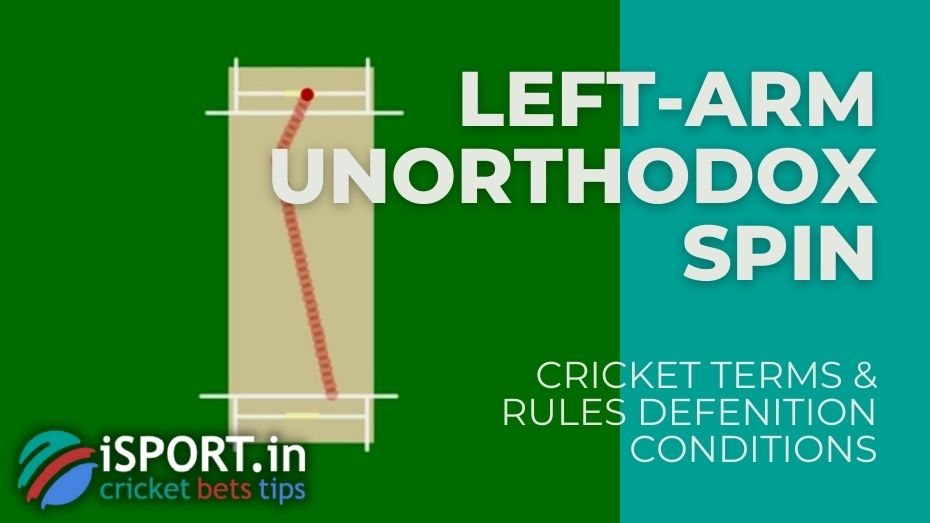 The Left-arm unorthodox spin or slow left-arm wrist-spin is a variation of the left-hand serve technique when the bowler tries to slow down the ball’s spin with his wrist on one side as much as possible. In this case, the projectile itself is twisted from right to left (if viewed from the server’s point of view).

Some bowlers using the unorthodox spin also resort to googly or wrong’un, which have a similar right-to-left spin. The secret of the serve is the non-standard trajectory of the ball, which dodges a right-handed batsman if he tries to repulse the orthodox left-arm spinner.

Using this technique gives the ball a spin similar to a traditional right-handed serve, but the ball gains extra spin from the wrist’s movement. This technique is called “chinaman“ (Chinese) in professional circles.

Historically, left-arm unorthodox spin has always been accompanied by the definition of “chinaman” in the terminology of cricket. Until now, the term’s origin remains unknown, but there is information that it was actively used in the English Yorkshire of the 1920s.

The concept was first heard from Roy Kilner, who initiated its use in print: the unofficial term was mentioned in the “The Guardian article of 1926” about the Yorkshire bowler George Macaulay, who instead of the classic googly used chinaman. Naturally, the column did not reveal the essence of the term, but its mention in the press became much more important.

However, the Australian-born Chinese journalist Andrew Wu increased attention about using a racially offensive term in cricket in 2017. Wu made claims to the wording even though he emphasized its historical origin.

With everything going on, Wisden decided to officially change the definition of the term in Almanack (2018) from “chinaman” to the slow left-arm wrist-spin.

Historically, the first player to use this technique in the 19th century was South African bowler Buck Llewellyn. Then, Chuck Fleetwood-Smith used the pitch for 10 Test matches in the 1930s.

Among the popularizers of the left-arm unorthodox spin is Denis Compton, who was originally a slow-left arm adherent but then developed his skill thanks to the rotation of the wrist. This subsequently allowed him to take on scores (622) of wickets in first-class matches.

Australian cricketer Brad Hogg made a tangible contribution to technology development, who skillfully hidden him as wrong’uns. Kuldeep Yadav, Paul Adams, Garfield Sobers and many other cricketers are considered ardent fans of the left-arm unorthodox spin.

The Left-arm unorthodox spin is a very important person, a lot depends on him. Read more information about cricket in our section with cricket terms.

Left-arm unorthodox spin: what you need to know