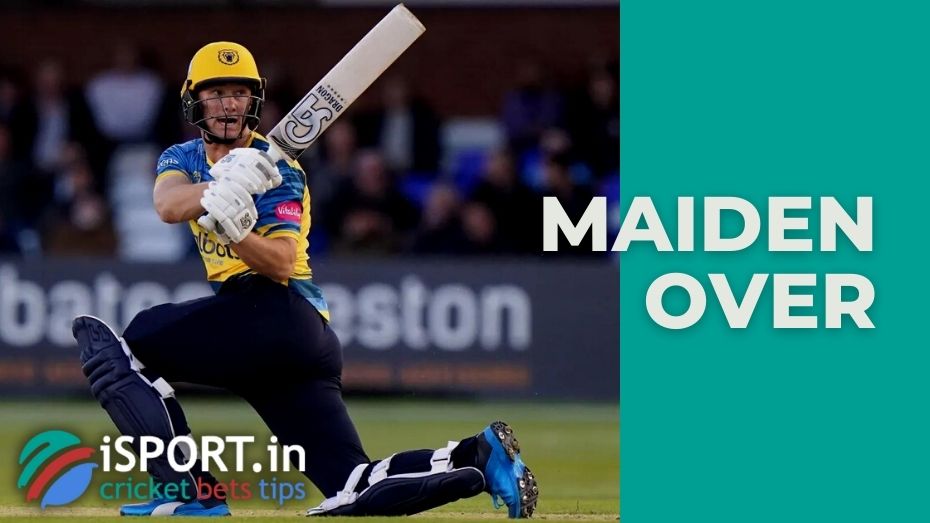 The basic rule of cricket is to knock out the batsmen on one side as quickly as possible and earn as many runs as possible on the other side. In this material, we analyze the first side. In particular, we will touch on the term “maiden over”. In fact, this is a unique achievement that is very much appreciated and revered at all cricket tournaments (especially in T20).

Maiden over – what does it mean in cricket?

In professional cricket, bowlers serve balls to batsmen according to overs. Today, one over consists of 6 innings (although previously it was 4 or 8 throws in a row).

As you know, cricket competitions are held in different formats. Cricket is divided into first-class championships (domestic and test) and tournaments with a limited number of overs. In the first-class format, there is no exact number of overs (the teams themselves set the numbers per inning). As for limited-overs cricket, there is a finite number of overs based on the name of the format:

By the way, a new tournament called The Hundred will be held in 2021. The game will consist of 100 overs per inning, and the bowlers will pitch 5 or 10 innings per over.

At competitions, you can often hear such a phrase as “maiden over”. In cricket, it means that the bowler made 6 throws (that is, an over), and the batsman could not score a single run during these 6 innings. When the bowler’s personal statistics are shown, the column with the number of maiden overs is always mentioned.

However, in order to get such an over, you need to play exactly according to the rules. A maiden over will not count if the bowler makes a throw that counts as a no ball or wide ball. The same cannot be said about bye and leg-bye. In this case, the runs do not go to the batsman personally but to the entire team, so maiden over continues to act.

Maiden over is a great way to get a batsman out of the game (even the emphasis here is more on the psychological state). If a maiden over is played at the stadium for several overs, then soon, the player with the bat will be disappointed in his strikes and will try to take a risk (and this is not always good).

Maiden overs are more common at championships with a large number of overs (there is less pressure on batsmen at these matches, unlike One Day or Twenty20). Usually, the average setting of a bowler in limited competitions is to earn a minimum of 6 runs per over. This means that the batsman will try to move more, hit the balls faster. All this, in most cases, leads to the fact that the player with the bat manages to score at least some minimum of runs, and this, in turn, will no longer be counted for a maiden over.

What happens if the bowler not only took maiden over, but also managed to knock out one or more wickets? In this case, they say that it was a wicket maiden. Especially such moments are appreciated in matches like One Day and Twenty20. It is very easy to collect such statistics with new batsmen who need time to adapt to the playing situation on the field.

The record for the number of consecutive maiden overs belongs to the famous Indian bowler Bapu Nadkarni. In 1964, in a series of matches against England, he managed to take 21 maiden overs in a row.

As for test cricket specifically, the greatest number of maiden overs for all time belongs to a player from Sri Lanka – Muttiah Muralitharan. We will display more detailed information in the list:

In limited formats of cricket, in fact, there is less opportunity to earn a maiden over. Therefore, it is even more worthy and pleasant to earn such statistics at such championships. In ODI status competitions, the list is headed by a cricketer from South Africa – Shaun Pollock. During the period 1996-2008, he played 297 innings in which he scored 313 maiden overs.

In the Twenty20 matches, the Indian player – Jaspreet Bumrah is currently recognized as the best. For 2016-2020, he managed to take 7 maiden overs in 49 innings.

If you put the statistics for all three formats together, then Muttiah Muralitharan will be considered the best. In total, he has 583 innings and 1992 maiden overs.

By the way, it is very interesting to watch the so-called super overs. The Super over is played in T20 matches when the main game ends in a draw. At the super over, each team gets two wickets and one full over from 6 innings. Sunil Narine, a player from Trinidad and Tobago in 2017, was able to take two consecutive maiden overs at the control draw, as well as earn one wicket maiden.