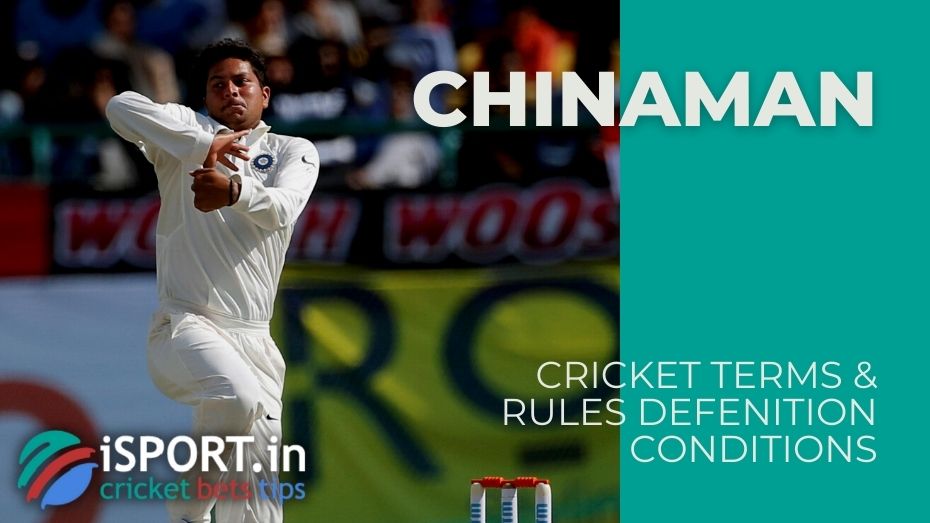 This review is about specific innings in professional cricket. You will learn how batsmen beat sharp strikes, why it is offensive to call cricketers chinaman, why it is humiliating and shameful when a bowler is called chucker and what the term chop on means.

In professional cricket, a chinaman is called a bowler who delivers balls to a batsman with a spin. The full name of such a spin is left-arm unorthodox spin or slow left-arm wrist spin. Such a pitch makes the ball’s trajectory change dramatically when it comes into contact with the ground. As a result, it turns out that the ball flies towards the bat before the rebound, and after the rebound abruptly changes direction, thereby forcing the batsman to dodge and make a Chinese Cut, which we also recall in this article.

Charlie Llewellyn is considered the 1st player who used this style of serving back in the XIX century. And already, the Australian cricketer Chuck Fleetwood is well remembered with such non-standard innings in the 1930s.

Why chinaman? In fact, there is no exact answer to this question. However, it is known that such a term was first used in The Guardian newspaper in 1926. It noted the Yorkshire player George Macaulay, as a bowler, serving in the style of googly.

The term chinaman began to be used more widely after the test match between England and West India in 1933. Ellis Achong was a player of Chinese origin. It was this cricketer who forced many batsmen to hit an unexpected pitch. The English player Walter Robins was especially surprised by this style of play. After the match, he approached the referee with the words: “just think what that damn Chinese did!” Most likely, thanks to him, such a rotation serve got its current name.

By the way, in 2017, a journalist from Australia – Andrew Wu, since he was of Chinese origin, expressed his dissatisfaction with the use of the term chinaman. He believed that such a term is used as a “racial insult” and that historically the word chinaman refers to a person who speaks Chinese. After the statement of Andrew Wu in 2018, Wisden Cricketers’ Almanack (the annual cricket guide in the United Kingdom) officially changed the wording to slow left-arm wrist-spin while noting that the word chinaman is no longer appropriate.

With a good serve, the bowler’s action is called a chop on. This means that he forced the player with the bat to deviate, to try to hit the ball with the inner or lower part of the bat. Also, the phrase chop on can describe other actions of the bowler. The main thing is that the serve is sharp. Then it is said that the bowler chop on the batsman.

Chinaman: what you need to know