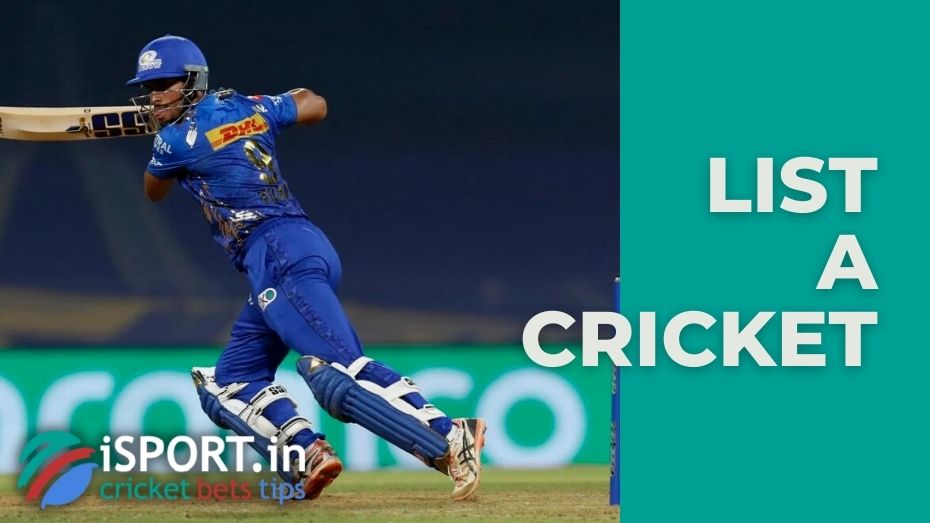 List A cricket is a classification of a one-day (Limited-overs) cricket competition where matches last no more than eight hours. The list A cricket includes One Day International (ODI) games and various home competitions, where the number of overs per inning for each team can range from forty to sixty. In addition, this also includes some international competitions in which teams that do not have an official ODI status take part. Along with Twenty20 and first-class games, it is one of the three basic cricket formats endorsed by the International Cricket Council (ICC).

Home competitions list A cricket are held in almost every country where cricket is played. Moreover, in most cases, games are limited to fifty overs.

It is worth noting that the list A cricket classification itself appeared relatively recently, in 2006, and was proposed by Philip Bailey, an English cricket statistician. Even though the ICC hesitated for a long time with the adoption of the appropriate decision, in the end the representatives of the organization had to admit that a new format was necessary. The involved specialists of the Association of Cricket Statisticians and Historians have developed the appropriate standards, which made it possible to systematize the career records and statistics of the participants according to the model adopted in the first-class competitions.

Thus, the list A cricket includes the most notable ODI competitions of each of the participating countries and test matches against the guest team. All games have been divided into three categories:

Thus, in this context, we can talk about two types of matches – those included in the list A cricket and those not included in this list.

One Day Premier Tournaments Away matches between first-class teams that do not participate in major domestic competitions (eg, varsity)

Matches that take place within the ICC Cricket World Cup Challenge League, as well as at the highest levels of the ICC World Cricket League Matches that are played according to rules that differ from the generally accepted ones (for example, there are more than 11 players on the field on each side)

Interestingly, the first match, which was later included in the list A cricket, took place in May 1963 as part of the preliminary round of the Gillette Cup. The teams from Lancashire and Leicestershire took part in it, and each got the right to 65 overs, and the bowlers were limited to fifteen.