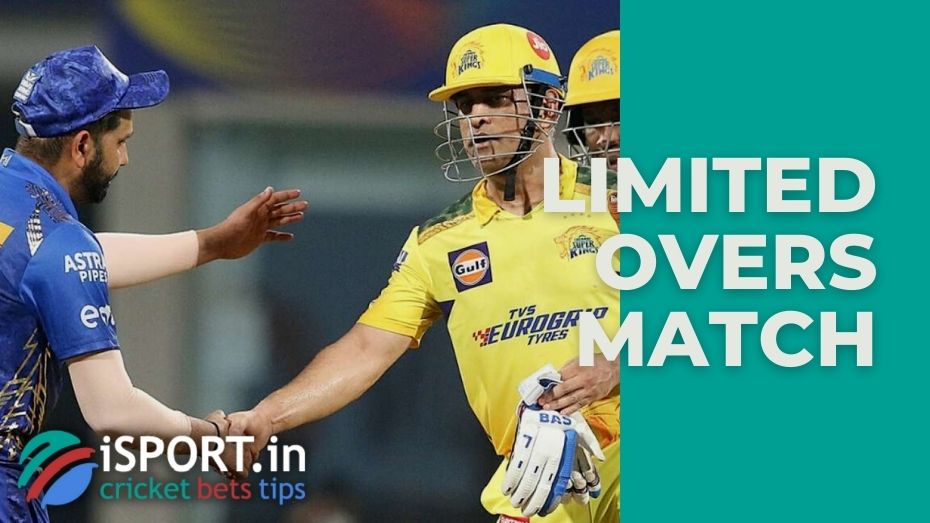 A limited overs match is a cricket match held in the so-called one-day format, that is, it cannot last more than one day. Unlike the traditional Test, white rather than red balls are used here since the team that hits the second is often forced to play under artificial lighting. Sports equipment manufacturers claim that there is no significant difference between these types of implements. However, many players insist that an experienced bowler is able to give the ball a higher speed on the rebound, especially if the limited overs match is on a super hard surface.

There are several basic varieties of limited overs match, in particular:

The essence of such matches lies in their name: in accordance with the rules, each team can use only a limited number of overs of six balls each – from twenty to fifty. In practice, this means that neither side can bring into play less than five bowlers, each of which will account for about 20% of the total number of overs (except the United States, where four bowlers in the limited overs match have five overs).

Each team gets the right to hit only once. However, in some cases, it is allowed to introduce the so-called Reserve day to determine the game’s final result. In addition, in some limited overs matches, a one-inning Super Over is played to determine the winner.

The first limited overs match took place in 1951 as part of the All India Pooja Cricket Tournament. The idea came from Klapan Tampuran, a former professional cricketer. It was later picked up in England, where eleven years later the first limited overs tournament at the county level, the Midlands Knock-Out Cup, took place. A year later, the first-ever Gillette Cup, which was won by the Sussex team, took place. The organizers continued to experiment with the format, reducing the number of overs to sixty, and at the end of the 60s, the home One Day League was presented to the public, where the number of overs was only 40 (it is noteworthy that both the Cup and the League have not lost their popularity to this day). The Royal London One Day Cup was later added to the list.

The first international limited overs match was held in Melbourne in 1971, and four years later, the inaugural World Cup was organized. However, more than thirty years passed before sports officials decided on another experiment – the Twenty20 competition, in which matches are limited to twenty overs (that is, 120 goals per team). The new format quickly gained popularity, so some amendments to the traditional rules were soon adopted to determine a fair score in the event of a draw.

Even though the Test format is not losing ground, several more limited overs match variants have appeared in recent years. So, in 2021, a 100-ball game lasting two and a half hours was held for the first time, but it seems that this is not the limit since the T10 leagues appeared in parallel, where the limited overs match lasts only 90 minutes. In addition, the UAE Cricket Council announced the launch of 90 Bash, a new franchise league with matches limited to 90 balls.

ODI (one day international matches). As a rule, they are held in the “day-night” format. That is, half of the game takes place in natural light and half in artificial light. The number of overs in the limited overs match has long been a subject of controversy, but later their number was limited to 50. Every four years, the Cricket World Cup is held, in which all teams with test status and teams that have passed ICC qualifications take part. The competition consists of a group stage, a semi-final and a final; the venue is pre-determined by the International Cricket Council. In the intervals between championships, the ICC Champions Trophy is held, in which all teams with a test status automatically become participants. In addition, each of the countries included in this list can host three-way ODI tournaments with the participation of two invited teams.

Home competition (List A). Limited overs matches, which are held within the framework of these tournaments, are one step lower than international ones, that is, ODI. List A competitions are held in almost all countries where cricket is played, but there are no similar restrictions on overs and their number can vary from 40 to 60 per team.

The issue of keeping statistics was in limbo for a long time, until in 2006 the ICC announced a decision to unify the data based on the first-class competition. Thus, currently, the most status one-day tournaments, plus matches against guest test teams, fall into the List A lists:

Accordingly, List A does not include World Cup warm-up matches, other away matches (for example, against first-class teams that do not participate in key home tournaments of this category, in particular, university ones), as well as exhibition and friendly matches.

Australia. Limited overs matches are held in two popular tournaments – the Marsh One Day Cup and the KFC Twenty20 Big Bash. The first one, created in 1969, is represented by the following teams:

The KFC Twenty20 Big Bash was introduced to the public in 2006. It is attended by the following teams representing the capitals of the Australian states:

New Zealand. Since 1971, the Ford Trophy has been held here, in which six teams take part:

Bangladesh. The main List A competitions are called the Dhaka Premier Division Cricket League and have been held annually since the 2013-2014 season. The following teams are played in them:

In addition, there is a separate T20 league in Bangladesh – the Bangladesh Premier League, in which seven teams have played since 2011:

England. The homeland of cricket boasts several major tournaments at once – the One-Day Cup (Limited overs matches are limited to fifty overs), the T20 Blast (covers England and Wales) and the Hundred (100-ball league). Each county has its own representative team, which takes part in all the mentioned tournaments:

Nepal. There are four leagues operating here, within which limited overs matches are held:

India. Cricket is very popular in this country, which is why fans have a wide range of competitions, which are held in a limited over format:

Pakistan. In addition to the Pakistan Super League, in which the Islamabad United, the Karachi Kings, the Lahore Qalandars, the Peshawar Zalmi, the Quetta Gladiators and the Multan Sultan are played, several home tournaments are held here every year, namely:

South Africa. Limited overs matches in this country are held as part of the Momentum One Day Cup (formerly Benson & Hedges Series or Standard Bank Cup, where six franchise teams are played:

Interestingly, the limited overs match is more popular with modern viewers than traditional test games that last up to five days. And the point is not only in the time spent but also in the fact that the players are more likely to take risks and use more spectacular techniques in such matches.