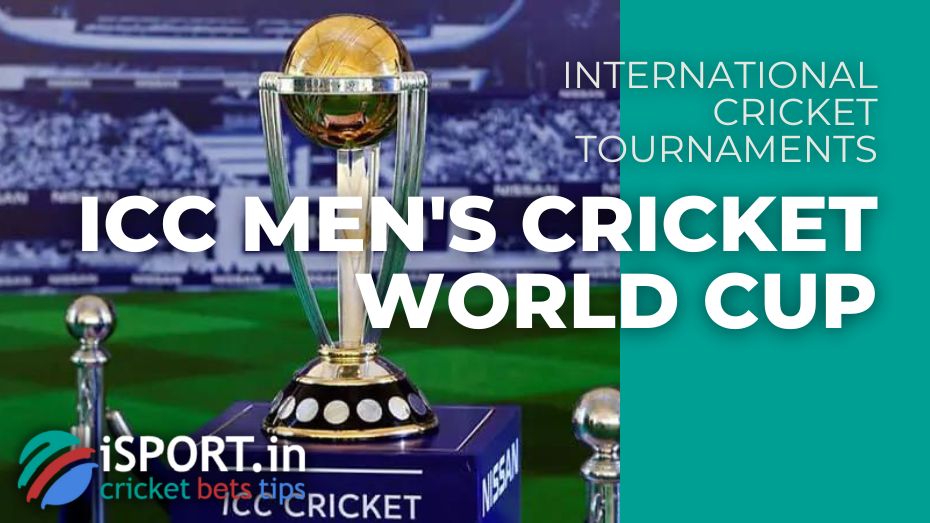 There are three formats for cricket competitions, but one of them stands out from the general background — One Day International. The ICC Men’s Cricket World Cup is held in this format; it is considered the most prestigious tournament in cricket. The ratings of the TV broadcasts of the competitions, which take place every four years, are always very high, especially during the crucial stages.

The ICC Men’s Cricket World Cup is held under the auspices of the International Cricket Council. Before the final part of the tournament, some teams go through qualifications. The first game of the tournament was held in 1975, and it is noteworthy that women played a similar championship two years earlier.

The first international cricket matches were played back in the 19th century. In 1844, the national teams of the USA and Canada met. However, reliable information about those meetings is not enough, so the debut official cricket match is considered to be the meeting of the teams of England and Australia in 1877. Three strong national teams gathered together for the first time in 1912. Then South Africa, England and Australia took part in the mini-tournament. These countries became the founders of the International Cricket Council. However, the debut tournament left more negative impressions. That summer turned out to be very rainy in England, so it was difficult to hold open-air matches. The meeting of three strong teams did not arouse great spectator interest either. This was because the British at that time were oversaturated with domestic level matches.

By the middle of the 20th century, the number of national teams that became members of the International Cricket Conference (later the Council) had increased to five. In 1962, the Midlands Knock-out Cup began to be held in Australia, where four teams participated. At the same time, the popularity of the One Day International format was growing in England. In the 70s of the 20th century, World Series Cricket was created on the initiative of Kerry Packer. Four teams participated in it: Australia XI, Cavaliers XI, West Indies XI, World XI. The variety of competitions around the world prompted the International Cricket Council to create the ICC Men’s Cricket World Cup.

England was the only country that was ready to host the Cricket World Cup in 1975. Eight teams took part in the first tournament:

The tournament matches were held at the legendary Lord’s. The cricketers were dressed in white uniforms and played with a red ball. The next two World Championships were also held in England. 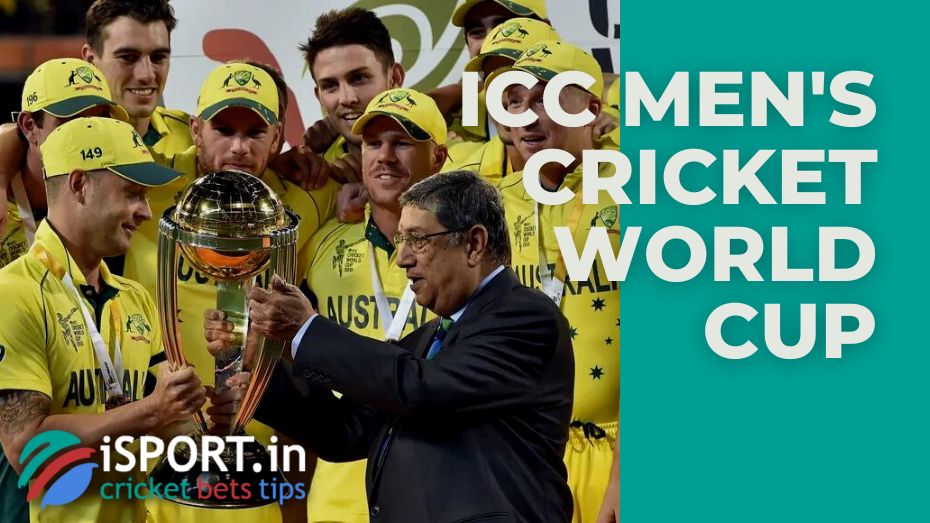 In 2019, eight teams received the right to participate directly in the World Cup, and two more national teams passed through the qualification. In 2023, the organizers of the world forum plan that only the hosts will receive an automatic pass to the tournament, and other teams will have to prove their right to participate in the tournament through qualifying matches. The leaders of the International Cricket Council believe that the number of national teams that can compete with the leaders of world cricket has increased.

As for the format of the final part of the Cricket World Cup, in the first four draws, there was such a formula:

In 1992, nine participants played each other in the group stage. Then the four best teams continued to compete for medals according to the previous scheme. An interesting format was used at the ICC Men’s Cricket World Cup in 1999 and 2003. The teams were divided into two groups. Then the three best of each formed Super 6. Then the four best passed. In 2007, eight teams (out of 16) were eliminated at the first stage. Then another half. As a result, the top four teams played in the 1/2 finals again. In 2015, at the group stage, the teams were divided into two groups of seven participants. The top four teams advanced to the 1/4 finals and then continued to fight according to the playoff system.

In 2019, ten teams played each other in the group stage, and next came the top four, who played in the playoffs. The tournament organizers have the same plans for the next two ICC Men’s Cricket World Cup.

The most successful team at the ICC Men’s Cricket World Cup is Australia. This team has five titles on its account:

The West Indies and India won two trophies at the ICC Men’s Cricket World Cup, with the West Indies winning the first two tournaments in a row. Pakistan, Sri Lanka and England became champions once. The main loser of the final matches is the New Zealand national team, which lost twice at this stage.

Kenya showed the best result among the teams not participating in test matches in 2003. This team played in the semi-finals. Ireland performed the best of all the debutants in 2007, being among the Super 8 teams. The first team to host the tournament and become the champion was the Sri Lankan national team in 1996. However, then Sri Lanka became the host along with India and Pakistan, and the final was held in Pakistan. India won the decisive match at home in 2011. In 2015 and 2019, the ICC Men’s Cricket World Cup was hosted by the Australians and the British, respectively. Both teams pleased the local fans.

Twenty teams have played at the ICC Men’s Cricket World Cup at least once. India, England, New Zealand, Pakistan and the West Indies did not miss a single tournament.

Two more – Afghanistan and West Indies – qualified for the final through qualification. The tournament was held in England at ten stadiums from May 30 to July 14. In the group stage, the national teams played a match against each other. The Indian national team entered the playoffs from first place. This team won seven victories, suffered one defeat and drew one more match. The Australians finished second, the British third, and the New Zealanders fourth.

The first semi-final of the World Forum in 2019 was held at the famous Old Trafford Stadium in Manchester. In it, New Zealand defeated India by a margin of 18 runs. There was no less stubborn struggle in the second match, but the British managed to beat the unyielding Australians. The meeting was held at Edgbaston Stadium in Birmingham.

The finale turned out to be dramatic. The New Zealanders performed well in defense, although the team constantly had to catch up with the opponent. At some point, the New Zealand national team seized the initiative and almost won. England was lucky that the referees counted the team an extra run. A draw was recorded during the main time. The opponents had to identify the strongest in the Super Over. In the extra round, the hosts of the tournament had a slight advantage.

The English won the first title in the ICC Men’s Cricket World Cup history, although they played in the finals three times in the last century. 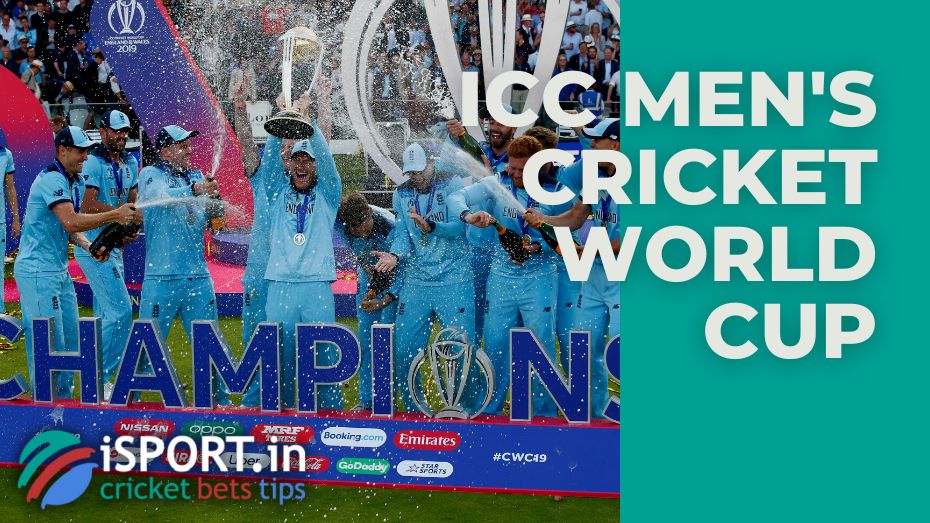 For more than 45-year history of the ICC Men’s Cricket World Cup has accumulated a lot of interesting facts, which we briefly introduce:

In 2023, the ICC Men’s Cricket World Cup will be hosted by India. Often there are several host countries at the world cricket forums at once, and the next championship will be an exception in this regard.