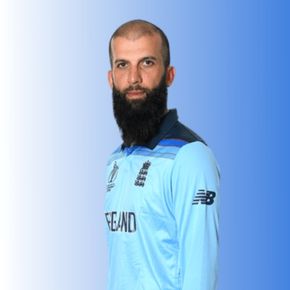 English cricket is one of the most spectacular in the world. This was achieved due to the level of play of athletes who represent England in the international arena and compete with each other in domestic tournaments. One of these players is Moeen Ali, also known to fans of this sport by the simple nickname “Mo”. The athlete plays for the England national team, which he represents in all cricket formats, and is also a member of the Worcestershire team.

Moeen Ali was born on June 18, 1987 in Birmingham, West Midlands, England. The athlete has Kashmiri roots: his grandfather once emigrated to England from Mirpur and married his grandmother Moeen Ali, who is British. The athlete’s parents are ordinary people: his father is a taxi driver, his mother is a nurse in a psychiatric hospital. However, the children in their family took the path of sports. So, the siblings of Moeen Ali, Kadir and Omar, are also cricketers, and the notorious players Kabir Ali and Aatif Ali are cousins ​​of Moeen. So the path chosen by the athlete is not surprising.

Little is known about Moeen Ali’s personal life. He is happily married to Firoze Hossein, who was born in Bangladesh. The couple have a son, Abu Bakr Ali, and a daughter, Haadiya Ali. They rarely come to the media’s attention together, as Moeen tries to separate privacy and publicity, therefore protecting the family from any attention from the media.

Moeen Ali began his career in the England national team in 2014. His first game was ODI on February 28 2014 against the West Indies. The player made his debut in T20I on March 11, 2014, and he played test cricket for the first time on June 12, 2014. The athlete showed himself excellently on the field, making him a permanent member of the national team.

Also, Moeen Ali plays for the English team Worcestershire County Cricket Club from 2007 to the present. During his career, he managed to play for other clubs (including non-English ones), including the Warwickshire, the Moors Sports Club, the Matabeleland Tuskers, the Duronto Rajshahi, the Royal Challengers Bangalore, the Cape Town Blitz, the Multan Sultans and the Chennai Super Kings.

Moeen Ali: achievements and interesting facts about the player

All athletes have one goal: they train a lot to achieve high results and achievements in their sport and become one of the best. Cricket is no exception, and Moeen Ali has many accomplishments that make him a great cricket player. At least, he entered his name in the history of cricket forever. Let’s talk about the most important:

Of course, one cannot help but talk about the simple life of an athlete outside the playing field. Moeen Ali is a very interesting and good person, as evidenced by many facts about him:

It is noteworthy that Moeen Ali does not maintain social media. At the very least, search engines do not give out any verified pages on Instagram, Twitter, or Facebook. There are many fan pages where fans of the athlete publish all the found photos with his image.