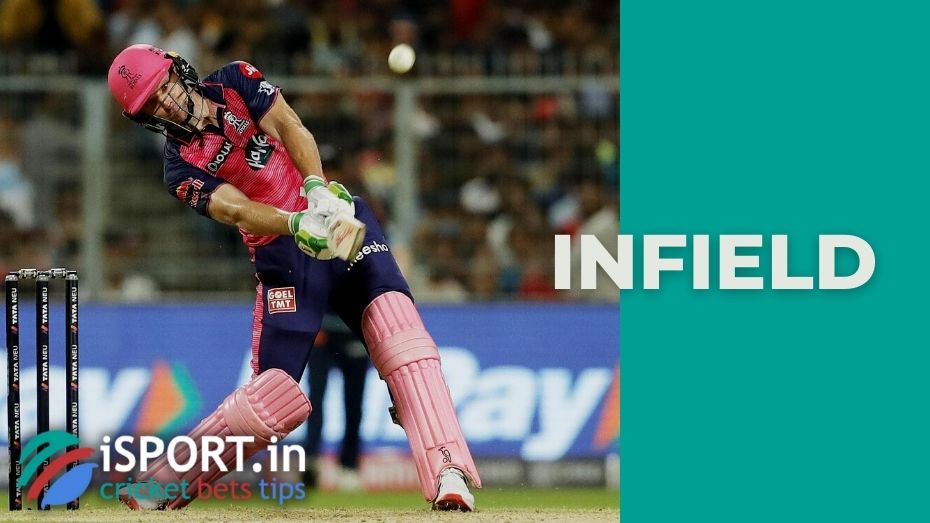 Infield – the inner part of a cricket field with a radius of 27.4 meters, enclosed in an Outfield ring. The key area where the main game actions take place. It is necessary to distinguish between Infield and Close-Infield: the second one is located inside the oval Infield zone and represents two intersecting circles with a radius of 13.7 meters each.

Unlike fielders, infielders (that is, those cricketers who are in the Infield zone during draws) must have a wider range of skills, fast reflexes, attentiveness and dexterity. They are the ones who make the game truly spectacular, so higher requirements are placed on infielders.

The division of the field into the Infield zone and the Outfield zone caused the introduction of a number of restrictions for fielders. The main goal is to avoid the game imbalance that occurs if the fielders help the bowler too actively. However, it is the attacking player, together with the team captain, who determines their positions on the field – adjusted for the fact that no fielder has the right to step on the pitch or cross it until the batsman has touched the ball.

Field restrictions can vary significantly depending on the format of the game, as well as on the gender of the cricketers (for example, in women’s cricket, the Infield radius is smaller). For example, in Powerplay competitions, only two fielders can be located in the Outfield during the first ten overs (if we are talking about an inning of 50 overs). If the inning is limited to 24 overs, then at least three fielders must remain on the Off or Leg Side.

Apart from the positions of the bowler and batsman, there are several key points in the Infield zone, namely:

This is interesting: Infield is provided not only on cricket fields, but also on baseball fields and racetracks.