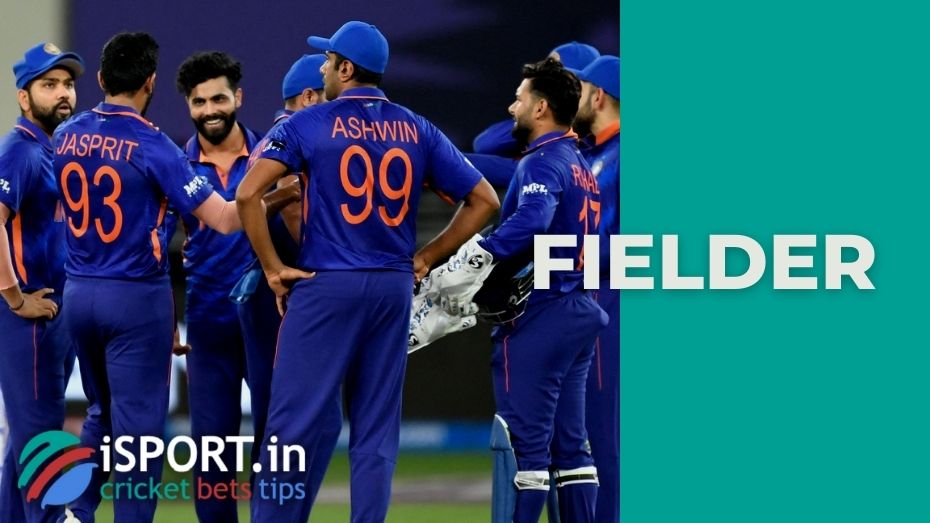 According to the Laws of Cricket, two teams of 11 each compete in the championships. One team serves and catches the balls, and the second hits them. So, the first team is the players who perform the actions of catching the balls. The team includes:

There is separate prepared material about the bowler and the keeper of the wicket. Now we will analyze who the fielder is.

A fielder is a player on the pitch who catches the balls directly after the batsman is hit. There are nine outfield players in the stadium (10th bowler, 11th wicket-keeper). They are located throughout the playground. To correctly determine the location of the fielders, there is a captain in the team who, depending on the tactics of the bowler, decides their appropriate placement. There are basic fielder positions in competition today. Some of them are used in almost every game.

Of course, nine fielders will not be able to close the entire playing area. It is the team captain who decides which positions to use and which ones to leave open. Accommodation is the main responsibility of the captain.

Fielder – some positions and general rules

Some outfield players can be used in the attacking zone (near the pitch). The goal of finding the fielder is to keep a close eye on the batsman and catch the ball quickly, rather than running all over the field. This position is called cordon (more in a separate article).

The deep cover, deep extra cover or deep midwicket positions are practically at the playground’s edge. The fielder’s main goal here is to defend the area and prevent the ball from bouncing (usually by bouncing off the ground) outside the field.

The cow corner position is a comic name for a place on the border between deep midwicket and long on (for more details about this and other positions, see the picture).

In principle, fielders can be placed almost anywhere on the pitch, subject to certain rules:

Also, the placement of field players depends on the tactics of the team and its attitudes towards the game. Basically, there are two attitudes to the game: to attack or to defend.

Attacking in fielding means positioning the fielder to quickly catch the bowler’s balls and knock out the wicket. It means that the outfield players must be positioned as close as possible to the batsman.

What you need to know when attacking:

The second important setting is protection. Defending means paying more attention to the batsman’s long-range strikes. To do this, distribute the fielders away from the batsman throughout the playing area. In this case, you need to know that:

Note that no field team member (other than the wicket-keeper) may wear gloves or external leg protectors. However, they are allowed to wear groin and chest protectors. It is also allowed to wear a helmet or face shield. The battering team may suffer 5 additional runs if the ball touches a headgear that the fielder does not wear. This rule was introduced to prohibit players from using their headgear to catch the ball in the 19th century.