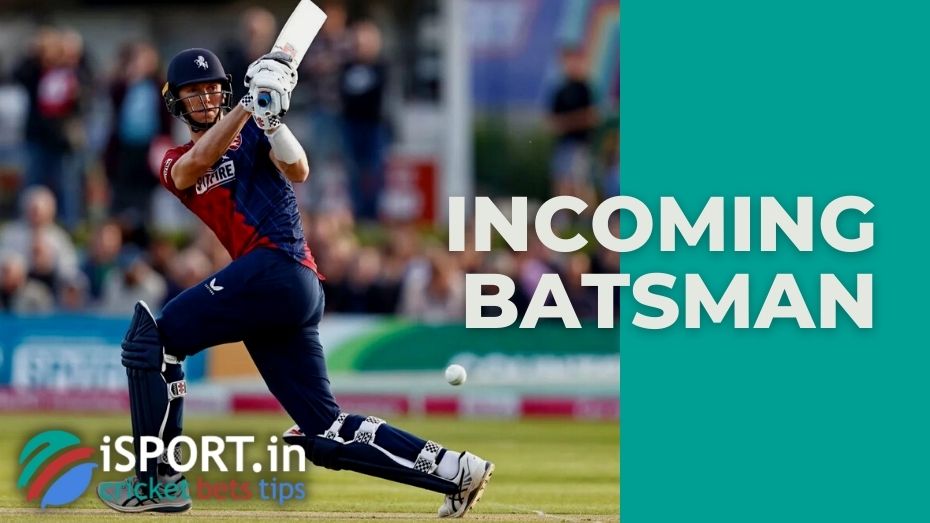 Incoming batsman is a term used in professional cricket to mean a batsman who enters the game next in accordance with the previously drawn-up list. Another important term is associated with it – Timed out, which denotes one of the methods of withdrawing from the game.

According to the basic rules of cricket, within the framework of each individual inning, two players of the battering team can be simultaneously located on the pitch. When the batsman leaves the game, he is replaced by a friend (Incoming batsman). It continues until the end of the inning, that is, until the ten representatives of the team leave the field.

Separately, it should be clarified that there is no single successful strategy for batsmen. The fact is that their main tasks at the pitch can be called, in fact, mutually exclusive since the batsman must at the same time:

To score as many points as possible, the batsman takes risks by performing difficult strikes, which in turn increases the risk of his being removed. This is largely why some batsmen choose to focus on defending the wicket while taking as few wounds as possible.

However, in general, the Laws do not restrict batsmen too much. An interesting exception is the Timed out rule, triggered when the Incoming batsman is not ready to enter the game within three minutes after the previous batsman is removed (Law # 40).

In the context of this rule, an Incoming batsman is any batsman who did not have time to enter the field. At the same time, there are no specific requirements regarding the order of appearance of batsmen at the pitch. The captain makes the list of the battering team, and he also determines which of the batsmen will go out-of-bounds if, at the time of the appeal, none of them had time to replace the previous one (in such situations, he usually chooses the worst one).

If the referees concluded that the battering team refuses to continue playing, the attacker would win. Such situations are extremely rare, as are several injuries sustained in the same inning. However, in the second case, it is not the end of the match that is announced, but the closing of the inning marked “missing / sick / injured” next to the name of the player or players.

The pause between a batsman going out and entering the Incoming batsman field has been reduced to 90 seconds in competition rules T20. That is why you can see that the players who are preparing to enter the field are located on special benches at the very edge of the field at the matches of this category. It is quite natural that batsmen try to act as quickly as possible so as not to let their team down – during the entire existence of the Timed out rule (since 1980), it has been applied only six times in first-class matches:

In some cases, the use of Timed out can raise questions. So, in the third test match of the 2006-2007 series between India and South Africa, two batsmen were quickly sent off in the second inning of the Indians, and Sachin Tendulkar was unable to enter the field since he was replaced as a fielder shortly before the conclusion of the South African inning. As a result, the next Incoming batsman Sourav Ganguly appeared at the pitch with a six-minute delay. The South African captain did not demand his removal, even though Timed out gave him such an opportunity.

It is interesting: Timed out has been applied internationally only once when New Zealand’s Incoming batsman Trent Boult could not enter the field due to injury.