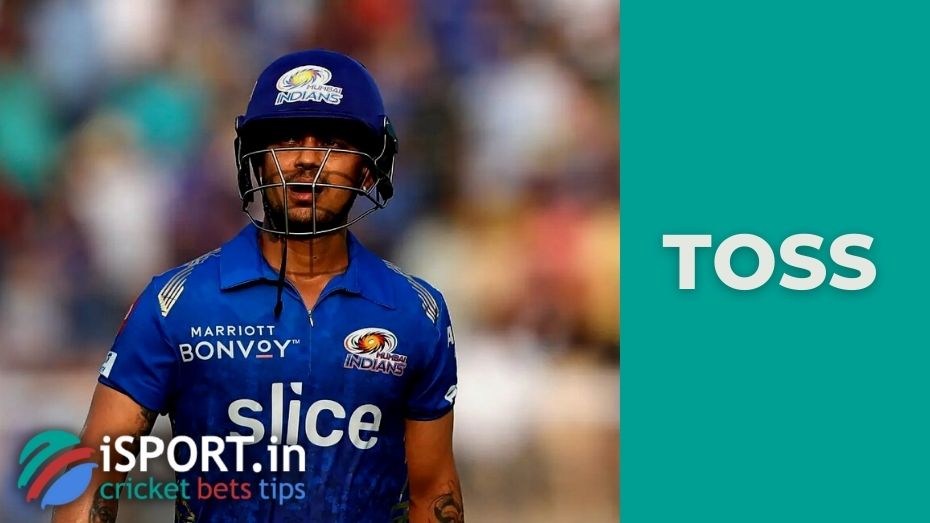 A toss is a procedure of drawing lots in cricket, which determines the right order of the team’s appearance on the field by tossing a coin.

The process of determining the order can affect the outcome of the meeting, so it is tactical in nature. In this regard, team captains are recommended to carry out preliminary work:

After that, the coin is tossed under the control of the chief judge. If the match is canceled before the draw, then there is no point in holding it. However, the coin toss may be postponed, for example, due to bad weather.

If you go deeper into history, then the draw was known back in the 18th century. The first set of rules of cricket (1744) already said that the side that won the draw had the right to choose the field. Since about 1809, the modern practice has been adopted, in which the coin toss is given to the judges, and the throw determines which side has the choice – to serve or to beat.

However, in 2018, the International Cricket Council (ICC) proposed to abandon the traditional coin toss in test matches. As an alternative –granting the right to choose to enter the field in the first or second order to the away (guest) team. According to the original plan, this technique was to be tested for the first time during the 2019 Ashes series, but at a meeting of the ICC committee in May 2018, the majority voted for the traditional toss of lots, which has already become an “integral part” of this sport.

Although the attempts of innovations did not end there, so during the English County Championship 2016-2019, there was no mandatory draw, and the right to enter the field as the first or second number was offered to the visiting teams. In the 2018-19 season of the Australian Big Bash League, the coin toss was replaced by the bat toss: the choice of order was determined by the “hills and flats” side of the fall.

It is quite difficult to assess the benefits of the order of entering the field. As a rule, if the team is not sure about the nature of the field or tries to protect itself as much as possible, then it adheres to the tactics of the first strike. A similar situation develops if there are good bowlers in the opponent’s team.

Sometimes the nature of the field deteriorates during the game, which makes it difficult to defend against bowlers using the rotation technique (serves in rotation). Naturally, this creates even greater problems for the team batting second.

From a mathematical point of view, winning the draw provides a better chance of success in the meeting. This became known based on the analysis of 2106 test matches played before December 13, 2013.

According to the study, the percentage of victorias in test matches is higher for the teams that won the draw.

A similar situation develops after the analysis of ODI matches played before December 27, 2006.