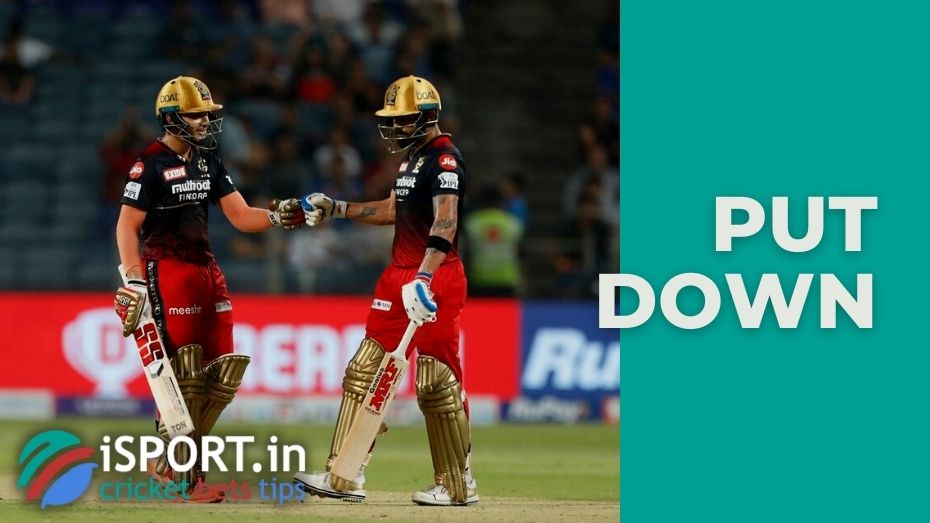 Put down is one of the popular terms in cricket that has a double meaning. In the first case, the put down means the destruction of the wicket, in the second – the caught situation, that is, removing the batsman from the game by intercepting the ball (a prerequisite – the projectile must not touch the pitch after the batsman has reflected it). Thus, if the commentator described the episode as the fielder has put the batsman down, it can be interpreted as an unambiguous out.

It should be clarified that the wicket is the main objective of the attacking (field) team. The bowler and the fielders have the right to try to create a put down situation by directing the ball into the wicket or stopping the batsman from running (provided that the ball does not reach the boundaries of the court).

The overwhelming majority of game episodes that lead to the removal of the batsman – for example, bowled, stumped and some others – are associated with put down of the first type, that is, the destruction of the wicket or a serious violation of its integrity. Laws has an entire section at number 29 that deals with put down issues. So, the wicket is considered destroyed if:

29.1.1.3. The part of the striker’s bit that has detached from the base (this rule applies only to episodes of put down);

29.1.1.4. By the striker himself, part of his clothing or equipment lost during the game;

29.1.1.6. A field player who knocks out one of the stakes in the same way as in the previous paragraph.

29.1.2. Partial violation of the integrity of the crossbar does not count as the destruction of the wicket. However, if it was knocked down in the gap between the stakes, then put down is declared.

29.2. If one crossbar was knocked to the ground, then it is enough to knock down the second one or knock out any of the three stakes for the put down.

29.3. Restoration of the wicket. If the put down was called while the ball was in play, the wicket could not be restored until the dead ball is announced. However, any fielder has the right to replace the crossbar or crossbars at the top of the stakes and stick one or more stakes in their original places.

29.4. The rules allow playing with wickets without crossbars (for example, if the weather conditions are not favorable enough). The judge decides on this issue, and he also determines whether the wicket was destroyed.

29.4.1. If the referee has agreed to play without crossbars, he may call the put down if the ball has damaged the base of the wicket, bat, part of the striker’s clothing or equipment.

29.4.2. If the wicket has already been partially or destroyed, then the previous rule applies to the stakes that retain their original position. In addition, any fielder has the right to replace stakes to be able to put down.

As for the second type of the put down, it is directly related to caught – one of the most popular ways to remove a batsman in cricket, in which any of the field players or wicket-keeper intercepts the ball after being hit by the bat, but before the projectile hits the ground.

There are several types of the caught (for example, if a wicket-keeper intercepts the ball, then the caught behind the wicket or caught at the wicket will be recorded). It is noteworthy that the episode can be interpreted as obvious or as non-obvious. In the first case, as a rule, the batsman admits defeat and goes out on his own. In the second, if the ball strikes the bat, bounces off the batsman’s foot, or slips between the bat and the pitch, an additional appeal by the field team to the referee may be required. In the most difficult cases, the referees resort to television viewing to determine the final put down.

Interestingly, the recognized record holders for the number of put down of the second type (Caught) – the South African wicket-keeper Mark Busher, on account of which 532 intercepted balls, and the Indian batsman Rahul Dravid with 210 balls.