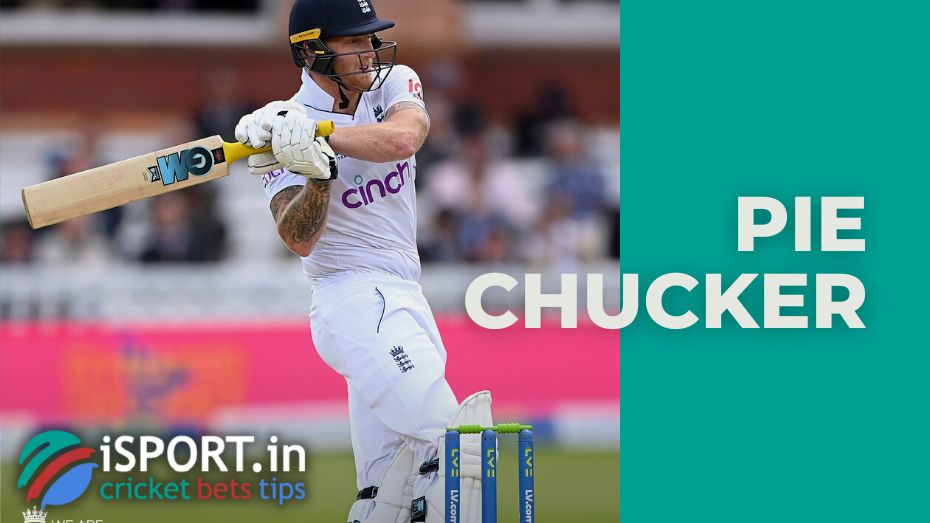 There is such a player in every club – the Pie Chucker. It looks harmless, but it is a truly formidable force. True, only to harm your team because rivals have nothing to be afraid of here. Evil tongues argue that such a player does not need a stretch because he is more likely to get injured during a tea break than during a match. The Pie Chucker refers to an unlucky bowler who cannot control where he throws the ball. Therefore is not dangerous for the opponent’s wicket.

What is the Pie Chucker in cricket, and where does this expression come from?

Pieing has its origins in the silent film era. Pies were thrown by Fatty Arbuckle, Keystone Kops, Three Stooges, and other comedians. So, it is likely that initially, the pie-throwing technique in the opponent’s face was an exclusively American method of attack and comedic technique. Over time, it spread throughout the world and now is a comedic element and a way to raise funds for charity, when someone from famous people or just from college or university teachers allows you to throw a pie for money in yourself.

Pieing became a political gesture for the first time in 1970 – it happened during a meeting of the American presidential commission on obscenity and pornography: Thomas King Forcade, a founder of High Times magazine, threw a cake in the face of Otto Larsen, a sociologist. The tradition of throwing the cake became so popular that even Nicolas Sarkozy (then the President of France) and Bill Gates got it.

Pies have not literally been thrown yet on the cricket field. So, where did the Pie Chucker’s expression in cricket come from? At the moment, the etymology of this term is not reliably known. But some facts can still be asserted with a fair degree of confidence:

This caustic term has not lost its relevance now: Yuvraj Singh, using it, teased Kevin Pietersen on social networks. So if your favorite team’s bowler suddenly starts to throw like he’s throwing a cream pie in the enemy’s face, you can safely say that he is playing like the Pie Chucker.