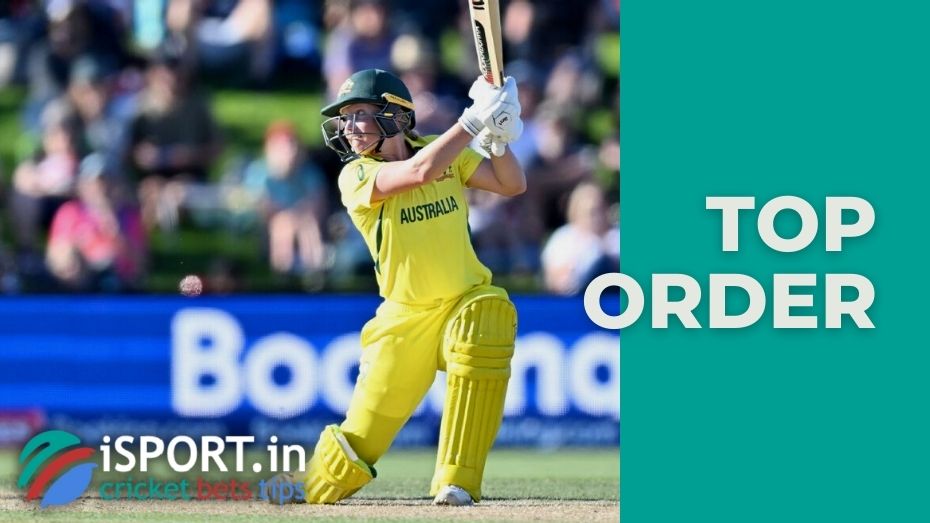 Cricket is a very difficult but brilliantly thought-out game. Literally, every phenomenon has its own term in it, so those who are trying to delve into every little detail of cricket will have to spend time studying the theory. One of the terms that you often hear about cricket is top order.

In this article, we will tell you everything you need to know about the term top order. You will learn what this definition means in cricket and get acquainted with five batsmen to whom this term can be attributed.

Top order in cricket: definition of the term

In fact, the definition of this term is as short as possible. Now we will understandably try to explain what Top order is.

Top order – batsmen who hit positions 3, 4 and 5 in the order are the most technically skilled batsmen with the best striking technique.

Moreover, top order batsmen do not just at the beginning of the game and at a later time. They must be prepared for any scenario.

The most successful and recognized batsmen in the world are usually in the Top order. There are, of course, exceptions, but there are really few of them.

Now that you know the definition of top order, it’s time to get to know the best batsmen who live up to this concept. We will briefly share excerpts from their biographies and where they are currently playing. Note that you can read about some of these players in detail on our website in the corresponding section.

Shai Hope is considered one of the best top order batsmen in ODI. In June 2018, he was recognized as the best male cricketer, best test cricket player and best ODI cricketer. And he was named ODI Player of the Year a year later. Shai Hope’s productive performance was noted by renowned West Indian cricket writer and commentator Tony Cozier. He described him as “the stylish # 3 batsman whose 211 record for Barbados against the Windward Islands was his only double hundred in the tournament”.

Probably every cricket fan knows the name of the New Zealand player Kane Williamson. This athlete is considered one of the best batsmen playing today. The late famous cricketer Martin Crowe said of him that “we see the dawn of probably our greatest batsman.” Kane Williamson was nominated for the Sir Garfield Sobers Award for the ICC Cricketer of the Decade and the Best Test Cricketer award. This happened in 2019. He was also the New Zealand national team captain at the first ICC World Test Championship in June 2021.

At the moment, Kane Williamson continues to play for the national cricket team of New Zealand successfully. He has also played for the Northern Districts from the 2007-2008 season, and has been an integral part of the Sunrisers Hyderabad from 2015 to the present day.

An interesting fact. Despite being a right-handed batsman, Kane Williamson writes with his left hand.

Another top order batsman is Pakistani athlete Babar Azam. Surely every cricket fan has heard his name, as Azam is considered one of the best modern batsmen in the world. Proof of this is the first place in the ICC ranking among the ODI batsman, which he took in April 2021 after defeating Virat Kohli (which we will talk about a little later). As of that time, Babar has won 19 international matches, 5 in Tests, 14 in ODI and 1 in T20I. Babar Azam was the top scorer of test runs for Pakistan in 2018 and 2019, top scorer of the Pakistani ODI team in 2016, 2017 and 2019. Of course, there are several other achievements, and it is unlikely that the career of this young cricketer will stop there.

Babar Azam currently leads the Pakistani national cricket team in all formats. In addition, the athlete is a member of the Central Punjab in the country’s domestic tournaments and plays for the Karachi Kings in the Pakistan Super League. In addition, he played for clubs such as the Sylhet Sixers, the Somerset and others.

There is no doubt that English batsman Joe Root is one of the most famous top order. Over the years, he has garnered numerous awards, including the England Test Cricket Player of the Year (2015), the ICC Player of the Month (January 2021), the PCA Player of the Year (2021) and many others. In addition, Joe Root has been nominated as a member of the Most Excellent Order of the British Empire in the 2020 New Year’s Cricket Merit Awards. Also, while Root mostly plays as a batsman, he is known as a great off-spin bowler.

Joe Root is currently the captain of the England Test Cricket Team. In addition, he has been playing for the Yorkshire team since 2009, and since 2021 – for the Trent Rockets franchise. It is also worth noting that Joe played for the Sydney Thunder in the 2018-2019 season.

The Indian cricketer Virat Kohli, whom you probably know, completes our top order batsmen. He can certainly be called one of the greatest batsmen of all time. He received a huge number of sports awards, for the listing of which, probably, a separate article is needed. However, here are some of them: the Sir Garfield Sobers Trophy as Male Cricketer of the ICC Decade 2011-2020 and ICC Cricket Player of the Year 2017 and 2018, the ICC Test Player of the Year 2018, the ICC Spirit of Cricket in 2019 and many others. In addition, he won the Rajiv Gandhi Khel Ratna award in 2018, which is considered the highest sports award in India.

Virat Kohli is currently the captain of the Indian national cricket team. In addition, he plays for the Delhi team in domestic Indian cricket tournaments and the Royal Challengers Bangalore franchise in the Indian Premier League.

Do you want to know more about another batsman? Leave your comments under this article, and our authors will definitely start writing an article about the player if you are interested in him.