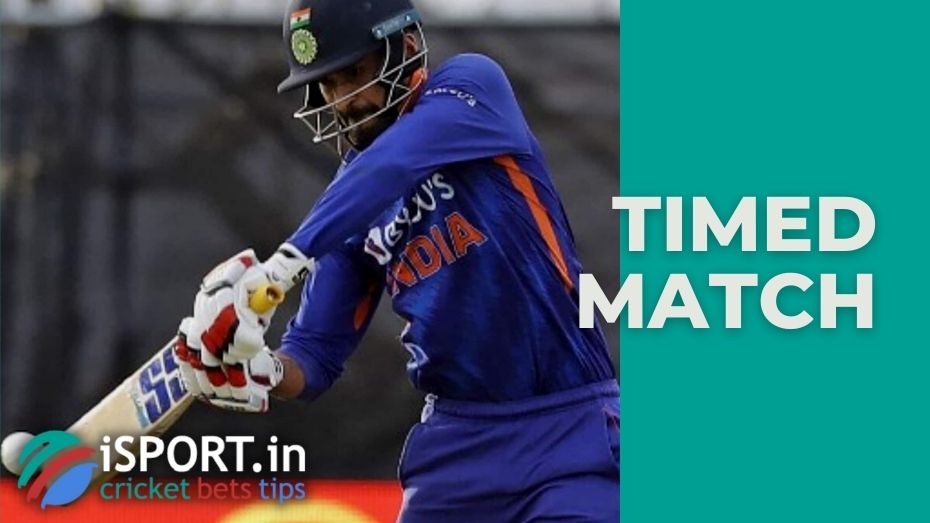 Timed match is literally a “time-limited match”, that is, a game in which the start and end times are clearly marked.

Cricket matches can last for several hours or several days, which brings this sport closer to yachting, sailing, rally and some types of racing. As a rule, test matches and first-class matches last from three to five days, which means that players spend at least six hours on the field every day.

Timed matches, which are held in the format of limited overs, as well as List A competition matches, take from six hours or more but never last longer than a day. As for the T20, 100-ball, and T10 games’ duration ranges from 90 minutes to three hours.

The main reason for this spread is that different formats of cricket imply different restrictions on the number of innings or days during which one innings can last. That is why a number of special rules have been developed that establish lunch and tea breaks, as well as stipulate the mandatory conditions for the start of the game and its end:

Cricket matches are held only in dry weather and in good lighting since the ball can accelerate to 130 km/h and above; therefore, the bowler should see it well. That is why matches are often interrupted with the beginning of rain or the onset of dusk. Nowadays, some test matches are held under floodlights (the first game with powerful artificial lighting took place in November 2015 and was a success, so it was decided to include day-night games in the lists of planned matches).

Since cricket matches are held in an open space (the only exception is the indoor Marvel Stadium in Australia), the main part of the competitions in England, New Zealand, Australia, South Africa and Zimbabwe falls in the summer. In the West Indies, India, Pakistan, Sri Lanka and Bangladesh, by contrast, cricket is played mostly in winter. In addition, in these countries, matches start earlier (9: 30), so, as a rule, the game can end by dusk.

A timed match starts when the referee commands “Play” (the same signal is used to resume the game after a pause or break). At the end of the match, he says “Time”, removing the stumps from the wickets. After this command, the appeals of the submitting party are not accepted.

Another interesting term associated with a Timed match is Last hour. It starts 60 minutes before the scheduled end of the match and contains a certain number of overs (15 in test games and 20 in first-class games). Thus, its duration may exceed the established 60 minutes, but in the end, the Last hour prevents the match from being delayed.

In the standard six hours of playing time per day, at least 90 overs of six balls each are laid. In case of an unplanned break (for example, in case of heavy rain), the match time may be extended by an hour.

The rules provide for several types of pauses in Timed match:

Even before determining the batting side in a Timed match, the teams agree in advance on the timing of the game and the duration of the intervals. However, if nine wickets have been knocked out by the time of the tea break, it can be postponed until the end of the innings (for a maximum of 30 minutes). In addition, in one-day matches, a tea break may coincide with a pause between innings.

It happens that a pre-agreed pause is postponed due to the peculiarities of the match itself (for example, when one of the players goes to the record).

This is interesting: in day-night test matches, a pink ball is used instead of the traditional red one to improve visibility.