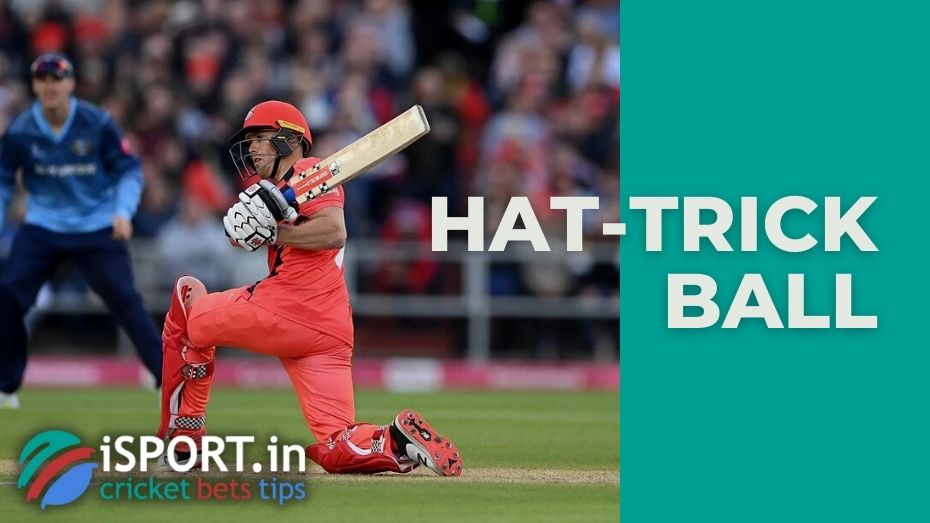 Hat-trick ball – three balls (serves) with which the bowler of one team takes out of the game three batsmen of the other.

The term “hat-trick” is very popular in modern sports and is used not only in cricket, but it is there that it has several meanings. So, depending on the game context, this word can mean:

The first cricketer to score a hat-trick was Heathfield Harman Stephenson (1858). The term soon began to be used regularly, although Hat-trick balls are still considered a rarity in test matches and limited overs. So, for example, between the first test hat-trick, which was designed in 1879 by the Australian Fred Spofforth, sending out Vernon Royle, Francis MacKinnon and Tom Emmett (1879) representing England, and the second, which was chalked up by the Englishman Billy Bates, four years have passed.

The list of game episodes in which the batsman leaves the game is detailed in Articles 27-39 Laws. This is:

Not all of these can be used by the bowler to his advantage (although more experienced players may be able to force the opponent to make a mistake, for example, by accidentally hitting the wicket), but two points deserve special attention:

In the first case, the destruction of the wicket means the complete or partial displacement of the crossbar and / or the fall of one of the stakes to the ground. It is allowed to be destroyed by the ball from the bowler’s serve, the batsman’s bat or any part of it in the event of a breakdown, by the bowler himself or part of his equipment, by a fielder (provided that he has the ball in his hand) or due to a hit by a fielder. It is separately stipulated that falling one part of the wicket to the ground is enough to take the batsman out of the game.

As for Bowled (by the way, the recognized master of this method is Muttiah Muralitharan, who thus removed more than fifty batsmen from the game), in this case everything is somewhat simpler. A bowled is called if the wicket was destroyed directly from the bowler’s serve. In this case, it does not matter whether the ball managed to touch the batsman’s bat or part of his equipment (the only exception is the referee and field players, who should not be touched by the ball). Bowled counts even if the ball bounces off after breaking the wicket and is caught by one of the outfield players. As a rule, in such cases, appeals are not needed: the episode itself is so obvious that the batsman voluntarily admits defeat.

Interestingly, there are very few cases when field players or wicket-keepers managed to score Hat-trick ball on their account (no one was registered in the international competitions). William Henry Brain, who played for the Gloucestershire as a wicket-keeper, scored a hat-trick on Charles Lucas Townsend’s serve against Somerset in 1893. No wicket goalkeeper has been able to score a hat-trick in first-class matches at the same time on serving and breaking wickets, but four more players have managed to score a hat-trick on serves:

As for the outfield players, only two of them managed to score a hat-trick – Jordon Thompson, who played for the Northants (2014), and the Somerset’s representative Marcus Trescothick in 2018.

It is interesting: the term Hat-trick ball itself did not appear in football but in cricket. Bowler, who managed to send three opposing batsmen out of bounds on three consecutive balls, received a new hat, purchased by the club at their own expense.