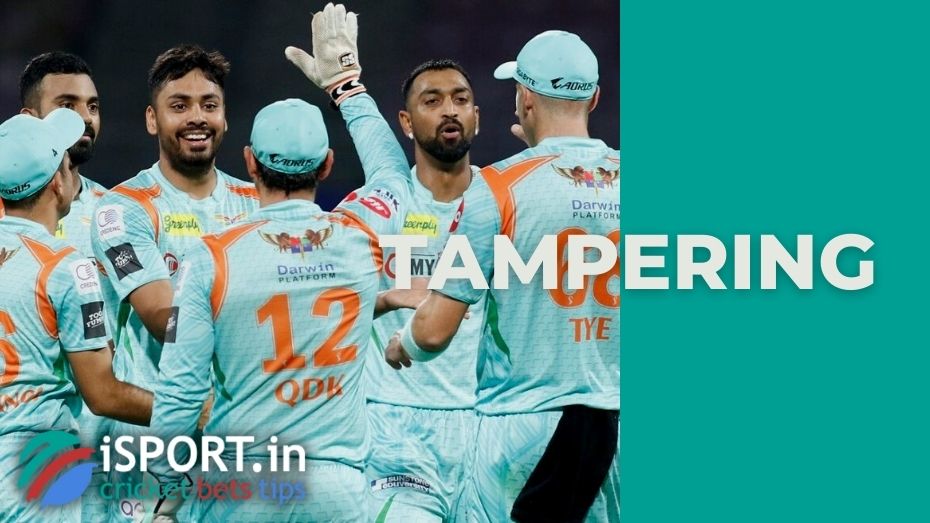 Tampering is an action to change the physical characteristics of a cricket ball. As a rule, it is practiced by bowlers who seek to change the angle of twisting the projectile and make it easier to hit, but it directly contradicts the set of rules and Spirit of cricket.

Tampering is dedicated to a separate subsection of Laws – 41.3 (Unfair play), which literally says the following:

41.3.1. The umpire’s duties include frequent and regular inspections of the condition of the cricket ball. In addition, they are required to immediately inspect the ball if they suspect that one of the players has tried to change its condition;

41.3.2. Any action of a player aimed at changing the physical characteristics of the ball is a direct violation. So, in particular, a player with a bat has no right to damage the ball intentionally;

41.3.2.1. Nevertheless, field players are allowed to polish the ball on their clothes, without using any auxiliary substances and without delaying the time;

41.3.2.3. It is allowed to dry a wet ball with a towel under the supervision of an umpire;

41.3.3. If any of the above points were deliberately violated, the umpire has the right to apply sanctions;

41.3.4. If the umpire determines that the condition of the ball was intentionally changed, he must check with the captain of the second team whether he wants to replace it;

41.3.4.1. After requesting a spare ball, the umpire must enter into the game a ball that is comparable in terms of the degree of wear and tear with the previous one;

41.3.4.2. Regardless of whether the ball was replaced or not, the umpire, who is on the bowler’s half, must assign five penalty runs and inform both sides about the incident without fail.

It is significant that in the case of a repeated violation, the umpire has the right to permanently suspend the guilty bowler from participating in the match and even fine the captain since he is responsible for the actions of his players on the cricket field.

In the vast majority of cases, Tampering refers to two types of actions:

It is important to remember that swing bowlers often use saliva/sweat to polish the ball, as this allows you to spin it more effectively in the air on the serve. Fielders also often rub the ball against their clothes (for example, if the pitch is not dry after the rain and the ball slips out of their fingers). Last but not least, that is why the umpire is obliged to carefully monitor the actions of the attacking side to identify possible violations.

However, many commentators believe that small tricks of bowlers are so common that it is simply impossible to eradicate this practice. Moreover, in some cases, it is extremely difficult for referees to prove that a player intentionally changed the state of the ball, especially if it is partial damage to the seam. Nevertheless, in the era of digital technology development, when each game episode can be viewed from several angles, it is much easier to uncover gross attempts at deception than in the old days, when the lighting on playgrounds left much to be desired.

In 1990, during New Zealand’s tour of Pakistan, visiting bowler Chris Pringle used a pre-hidden bottle cap to make notches on one side of the ball. Both the player and the captain of the New Zealanders subsequently admitted the violation but insisted that the opponents did the same, although they could not provide sufficiently convincing evidence.

Four years later, England bowler Michael Artherton was accused of Tampering during a match against South Africa, which was held at Lord’s. The cameras recorded how the player got into his pocket and rubbed the ball with some substance before serving, and although the bowler himself claimed that he had a handful of soil in his pocket, the referee decided to fine him two thousand pounds sterling.

The first player disqualified for Tampering in the early 2000s was the famous Waqar Younis (Pakistan), who was additionally fined 50% of the match fee. However, one of the most high-profile scandals related to Tampering was the suspension of Sachin Tendulkar a year later: in a test match against South Africa, the umpire considered that the player tried to violate the integrity of the ball, although Sachin himself claimed that he only wanted to clean it from the stuck grass. The fans’ reaction – especially the Indian ones – was so violent that it was decided to suspend the umpire from serving the next game.

This is interesting: one of the most effective measures to combat Tampering was a ban on the use of saliva for polishing the ball due to the spread of COVID-19 strains. Whether this measure will be canceled in the future is still anyone’s guess, but it is possible that the MCC will think about making appropriate edits to Laws.