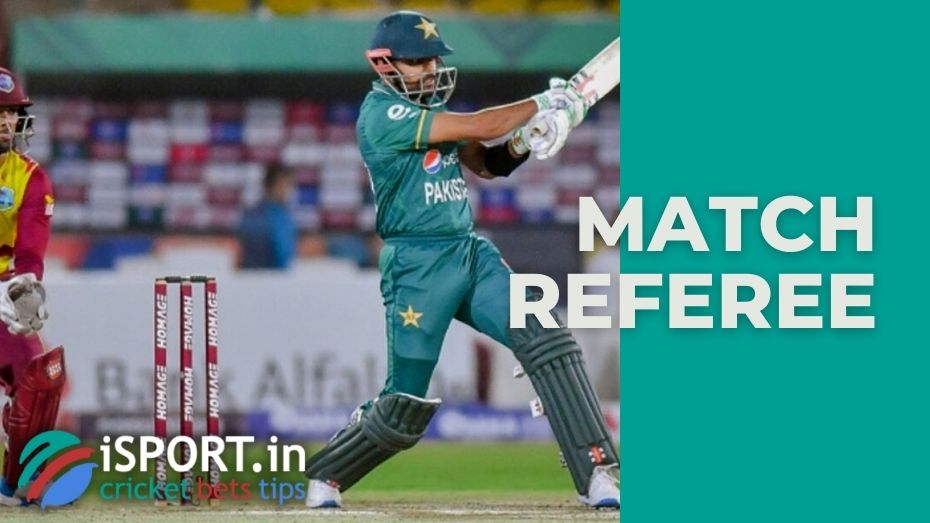 Cricket is a game of honest and conscientious gentlemen. The ICC Cricket Code of Conduct was invented in cricket to maintain such a high status. The referee is responsible for ensuring compliance with the Code at international matches. This is an additional person who observes the game in a separate room, and after the game, draws up a report with all identified violations. Read more about the match referee in this review.

Match referee – who is he?

Each sport has its own laws and rules. It seems everyone understands it. Suppose the dispute can be resolved independently (between the players) at the amateur level, then at the professional level. In that case, individuals always make sure that the game is played within the rules. Such people are called – match referees. Each sport has a different number of judges.

In addition to judges, referees are also present at some matches. Although quite often the same person is called the judge and referee, they are in different positions. According to the Laws of Cricket, professional games must have at least two referees (no referee).

Mostly the match referee appears in either test matches or international one-day games (ODI and Twenty20I). This is an official appointed by the International Cricket Council. During the game, the referee is outside the field; a separate zone is provided for it. The Match referee does not make any decisions related to the game itself or its outcome (the two main referees on the field are responsible for all this).

The main task of the referee is to ensure that players comply with the ICC Cricket Code of Conduct. After each international game with a referee, a match report is drawn up and sent to the ICC. The report records all events, actions of players or judges, which, in the referee’s opinion, violate the Code of Conduct.

The ICC Cricket Code of Conduct was designed to regulate the behavior of professional players or referees (traditionally, cricket is considered a gentleman’s game; therefore, the Code of Conduct is highly prized in this sport). From the Code, we list the major violations, for which the most serious fines and sanctions are provided:

Suppose a cricketer or referee is noticed in one of these violations. In that case, he can be fined a certain percentage of his salary, banned from participating in a certain number of matches or even deprived of the right to play at a professional level for several years or life.

In addition to the major violations, the Code of Conduct displays other illegal aspects. They are divided into four levels (we will give an example, one item from each level):

Penalties vary depending on the level (4th most serious). It is important to note that if the violation occurred in test matches, then the ban does not affect the one-day matches in any way and vice versa.

The match referee also evaluates the quality of the field before and after the match. We repeat that he provides all the information to the ICC.

The interesting point is that match referees are usually former cricketers who have succeeded in their years. Some of the most famous are former Australian cricketer and sportscaster David Boon and former professional Sri-Lanka player Ranjan Madugalle.

By the way, you can find detailed information about match fixing on our sports website for example Sportsbetting promo code.