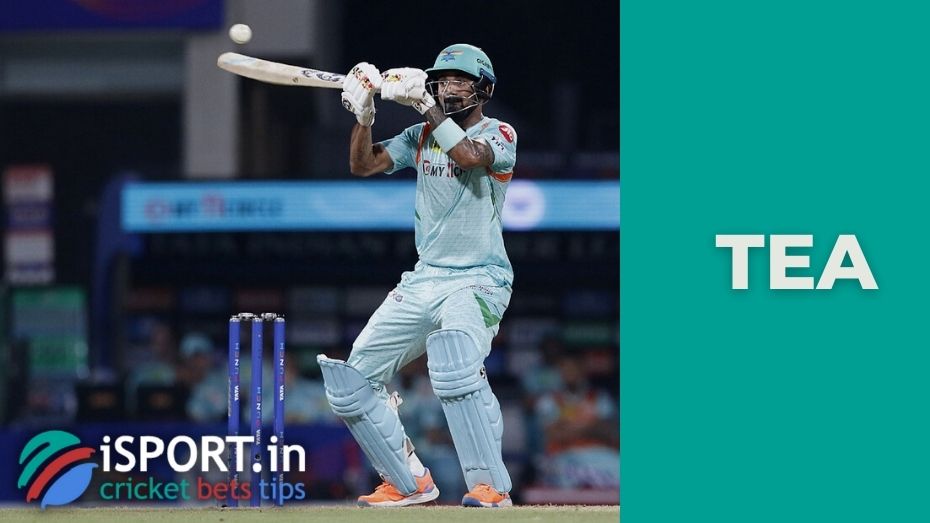 Tea is a traditional cricket tea break. It is noteworthy that this is the only sport that stops the game several times precisely for meals. The reason is simple and lies in the relatively unhurried rhythm of matches, unusual for fans of other team games (for example, football, where even the most important matches cannot last longer than two and a half hours) also in the format itself.

For example, in the classic Test, games stretch over five days, so it’s no surprise that cricketers who take to the pitch in the late morning need rest and a snack. The first is a short drink break, followed by lunch, after which the players return to the field. The match continues until the tea break when the participants are allowed to leave the field and go to a special pavilion. After the next resumption of the match and until the end of the playing day, another drink break is allowed, but, as a rule, this opportunity is used only in hot weather.

It is worth noting that the tea could well have become a coffee break. However, historically, cricket was most widespread in the British colonies, which were precisely the main tea suppliers. Darjeeling, Dimbula, Uva, and several other varieties were very popular among the British aristocracy and relatively poor sectors of society. It is not surprising that the refreshing and tonic properties of the drink were also appreciated by cricket players, who are often forced to spend several hours in the sun (it is noteworthy that, contrary to popular belief, the first tea break was introduced not by the British, but by the Australians).

These days, the menu for tea, as well as for longer lunch breaks, is highly regulated. This is due to the development of sports nutrition and the emergence of new cricket formats that force players to seek a healthy balance between relaxation and active performance. The food should be nutritious but not excessively high in calories since the main task of cricket players (first of all, this concerns, of course, test matches) is to maintain good shape during prolonged games.

The tea is given twenty minutes. Taking into account the peculiarities of the local cuisine, it usually consists of:

Indian cricketer Nayan Mongia noted that the host country, as a rule, tries to provide players with a choice. Still, the vast majority prefer not to overeat, limiting themselves to a cup of tea and a sandwich. The reason is obvious: to maintain a high speed on the field, a cricketer must eat enough carbohydrates, but in moderation, since a full stomach is a poor helper on the field.

Interestingly, with the onset of the COVID-19 pandemic, traditional tea was under threat. Many franchise clubs have complained that they cannot provide the necessary safety for matchmakers and staff without giving up tea breaks. Ultimately, the restrictions affected everyone: the players were for some time deprived of the opportunity to use shared locker rooms, spit on the ball before serving and, of course, drink tea with colleagues during the usual twenty minutes. It got to the point that the issue of the tea break was put to the vote, and most English clubs spoke in favor of a temporary ban, which, however, did not cause understanding among the players.

The latter was partly due to the conservative nature of the game (for example, some cricketers referred to the fact that darts players were not deprived of the traditional lager). But there is another objective reason: not all clubs, especially the poor, can afford to maintain their canteen. They depend on volunteers to prepare snacks for tea in this regard, and the break itself can often be the only opportunity for players to replenish their strength throughout the day. Feeling hungry can affect a cricketer’s performance no less negatively than overeating, so it is unlikely that giving up tea will be permanent.

It is interesting: Tea and drink break should not be confused. The second, as a rule, lasts only a couple of minutes and is not so strictly regulated by the rules (for example, in the case of extreme heat, the referee may announce several such breaks, especially when it comes to a test match).