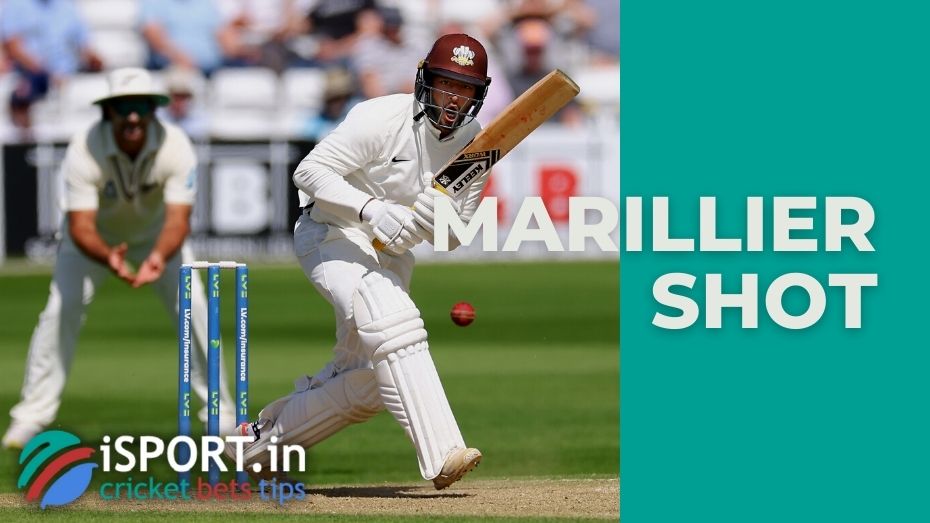 Marillier shot, paddle scoop or ramp shot are all names of the same shot. There are a large number of different innings in cricket. In order to beat them off qualitatively, it was necessary to come up with specific bat strikes. One of these strikes is the Marillier shot.

It is believed that the Marillier shot refers to the modern taking of the ball. Such batting was invented at the beginning of the XXI century. How is this strike performed? The batsman holds the bat parallel to the ground; the bat is directed towards the bowler. During the innings, the batsman in this position tries to throw the ball high over the wicketkeeper. Usually, with a good kick, the ball will fly to the border of the sports field.

The Marillier shot is considered an unusual shot; it is not even included in various cricket textbooks. Some fans say that this is not a real and low-quality blow (we do not agree with this). However, with a good Marillier shot, firstly, the batsman can count on the ball leaving the playing area (and this is 4 or 6 runs at once). And secondly, when such a strike is executed, the ball is in flight for a long time; therefore, batsmen at this time can earn a decent number of runs when running. In addition, the zone into which the ball hits when Marillier shot is often not protected by fielders. Therefore, it is very difficult for fielders to quickly run to the point so that the ball cannot fly out of bounds or so that the batsmen do not score a large number of runs.

The kick was named after a former professional player from Zimbabwe – Dougie Marillier. At the beginning of the XXI century, such a shot happened at a three-way tournament between Australia (the host), West Indies and Zimbabwe. Marillier was announced for the last match against Australia. During his strikes, the player was able to give the national team a chance to win. No one had such thoughts before Marillier, but it was this player who made a very cool series with his non-standard strikes through himself and revived hope for Victoria. Unfortunately, Dougie missed a few innings. Zimbabwe lost the match with a 2-run gap.

After this phenomenal performance, the player became popular, and the shot was called Marillier. Dougie continued to perform well for the national team in the following years. He also received the nickname Bay City Roller from his teammates (for the same shots during games in the cities of Perth and Faridabad). Marillier finished his international career in 2004 and completely stopped playing at the professional level in 2010-2011.

At cricket competitions, there were also very similar strikes on the Marillier shot. So, in 2009, during the ICC World T20, a player from Sri Lanka – Tilakarathe Dilshan, was able to master a similar kick. His cool batting was also noticed after the Dilshan-style shots became known as Dilscoop. The only difference from the 1st hit is that with a Dilscoop, the bat goes directly over the batsman’s head and with a Marillier shot – from the side (over the shoulder). To fully understand how such strikes are made, watch the videos.