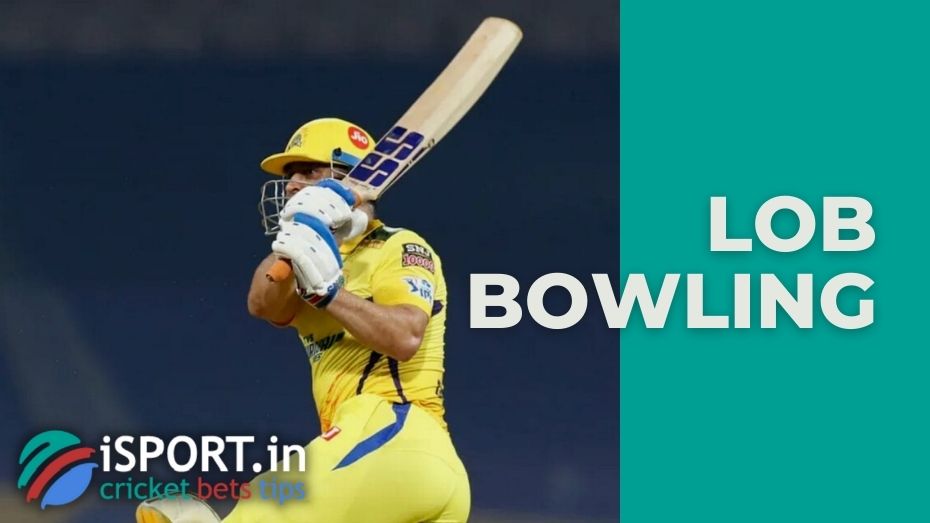 Lob bowling is a type of Underarm bowling, an attacking technique that is practically not found in modern cricket. Also known as Donkey drop.

The main feature of Lob bowling is that, unlike the standard serve height approved by Laws, the player lowers his hand significantly lower, sending the ball up in an arc. A perfectly executed Donkey drop allows you to destroy the wicket with a single hit, but in most cases, the projectile goes behind the batsman’s back to a crease.

Currently, Lob bowling can be seen primarily at provincial and children’s competitions, where the rules are less strict than at professional ones. However, this was not always the case: moreover, it was Underarm bowling and its varieties that set the tone for the entire game at the early stages of its development. This was partly due to the fact that the condition of the playgrounds in the XVIII-XIX centuries left much to be desired since they were used for playing only occasionally; the rest of the time, they could graze sheep or break horses. The uneven surface of the pitch allowed bowlers to achieve optimal results by rolling the ball low since even the best of the batsmen could not accurately predict the direction of its movement.

Early editions of the Laws did not actually restrict bowlers in choosing the method of bowling. Moreover, the first attempts of the players to abandon Underarm bowling in general and Lob bowling, in particular, were not understood by either the public or the organizers of the competition, and moreover by rivals who saw in the Roundarm a violation of age-old traditions.

The matter got off the ground only in the middle of the century before last when more attention was paid to the condition of playgrounds. The first edits to the relevant Laws section were made in 1845, but more than a hundred years passed before Lob bowling was actually banned. The impetus for this decision was the Underarm bowling incident that occurred during the 1981 Australia–New Zealand one-day match.

On the last over, there was only one ball left to play, which New Zealand was obliged to win in order to bring the score to victory. Australian captain Greg Chappell asked the bowler (his younger brother Trevor) to perform an Underarm-style serve to force batsman Brian McKechnie to play from the defense. Australia won the match, but the last episode caused a storm of indignation among the fans. After a series of consultations by officials, it was decided to make a number of edits to the Laws (article No ball), namely:

21.1.1. The umpire shall ascertain whether the bowler intends to bowl right handed or left handed, over or round the wicket, and shall so inform the striker. It is unfair if the bowler fails to notify the umpire of a change in his/her mode of delivery. In this case, the umpire shall call and signal No ball.

21.1.2. Underarm bowling shall not be permitted except by special agreement before the match.

21.1.3. Fair delivery is a hand. The delivery is considered completed according to the rules if the hand was indirect. In order not to violate this rule, one should raise the arm to shoulder level, while the elbow joint should not straighten (partially or completely) until the ball leaves the palm; however, flexion and rotation of the wrist are allowed.

The umpire, who is next to the striker, determines whether the delivery was made honestly. If he decides that the player straightened his arm, he has the right to declare No ball.

21.3.1. If the umpire recorded a delivery that was not carried out according to the rules, then he should declare No ball and then inform the second umpire about the reason for his decision. In such a situation, the umpire, who is on the bowler’s end, is obliged to:

The rule that prohibits Lob bowling is followed very strictly. So, in particular, if the bowler again serves low after the first warning is issued, then the umpire suspends him for the whole inning.

This is interesting: it is believed that Lob bowling is incompatible with Spirit of cricket because, with the help of this pitch, the bowler does not just send the batsman out but also does it in the most offensive way for the latter. In this sense, Lob bowling can be compared to a Panenka in football – a “scoop” kick, which got its name in honor of Czechoslovak midfielder Antonin Panenka.