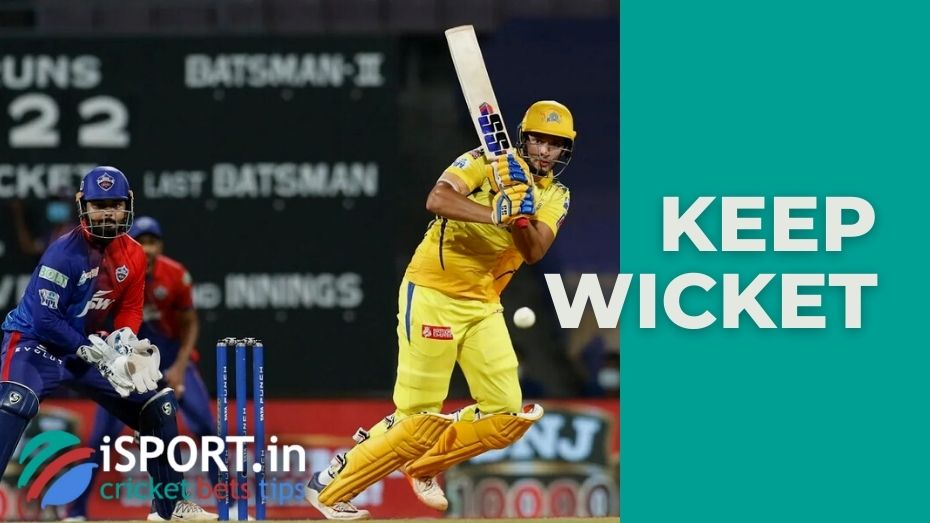 Keep wicket – the position behind the wicket, which is occupied by one of the players on the field team (wicket-keeper). Its main task is to take out the opponent’s batsman-striker from the game. It can be done in several ways: intercept the bowler’s ball, destroy the wicket (stump), or force the opponent to step into touch. If the ball enters the outfield, the wicket-keeper may attempt to intercept it on the rebound.

Keep wicket has a separate section in the Cricket Rules (№ 40):

Even though Keep wicket is often underestimated, this position is not at all simple. The wicket-keeper must:

In the old days, the traditional position of the wicket-keeper was a half-squat. Now they more often squat behind the wicket, following the example of Australian Sammy Carter. It is worth noting that playing in tandem with slow bowlers is somewhat easier than with fast bowlers since, in the latter case, you need a trained reaction and the ability to assess the angle of the ball quickly. Alec Bedser and Godfrey Evans (England) have been among the best fast bowler / wicket keeper combinations in history.

Interestingly, previously, substitutes were not allowed to take the position of the wicket-keeper. True, exceptions did happen – for example, after the injury of the main wicket goalkeeper of the British, Bruce French, in a test match against New Zealand, the hosts successively replaced four players. However, the official permission to replace was spelled out only in the new edition of the Cricket Rules (2017).

At the same time, there are no strict restrictions on the Keep wicket position. Even though teams rarely refuse the services of a wicket-keeper, he can be transferred to the position of a fielder under certain circumstances.

The top ten wicket-keeper in test cricket competitions include:

It is interesting: the analogue of the wicket-keeper in baseball and softball is the catcher.