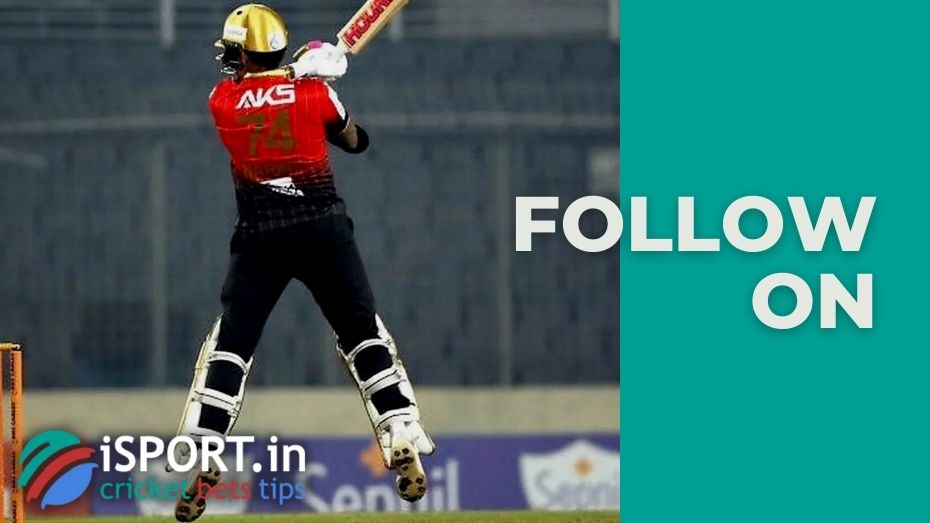 Cricket is a popular, multi-million dollar sports game. This sport appeared in the first half of the XVIII century. Today, cricket is among the TOP 3 most popular sports in the world. However, this game is also known for its unique and sometimes incomprehensible Laws. But if you try to understand them, cricket becomes even more interesting. In this article, we will analyze such a rule as follow on.

Every sports game has its own rules, laws, agreements, restrictions, etc. In cricket, Laws of Cricket were invented in England in 1744 (you can read more about Laws of Cricket in other sections of our website). The laws of cricket are incredibly complex and sometimes completely incomprehensible.

What is follow on? For the first time, in the Laws of Cricket, such a rule was used in 1787. Follow on refers exclusively to first-class cricket. First-class cricket is historical and, until recently, the most popular game format. It is divided into domestic and international (test) competitions. First-class cricket is played from 3 to 5 days (sometimes more). As a rule, two innings are played for each team. This means that any club will serve the balls twice and hit them twice.

To find out who will start as bowlers and batsmen, a draw is held before the game. The team that won the toss and chose the 1st inning for batting will also hit balls in the 3rd inning. So, in the 2nd and 4th innings, the role of batsmen falls on the shoulders of the second team (everything is very simple and logical).

However, the scenario of games is not always exactly like this. And there are explanations for this. When will the game be held, not according to the results of the draw? Let’s say the No. 1 team played its opening inning as batters and scored 300 runs. The No. 2 team also batted in the second inning and scored only 140 runs. By a draw, in the third inning, the No. 1 team must hit the balls for the second time, but sometimes this does not happen. This is where the follow on rule comes into play. This means that the No. 2 team can continue to play as a batsman in the third inning due to its small set of runs. This is done in order, firstly, to reduce the time of the game, and secondly, to eliminate the possibility of a draw.

Follow on is an optional rule and is used exclusively with the consent of the captain of the team that scored the most overs. The follow on rule is considered very difficult for a club that continues to hit balls. This is logical since the team knows in advance that it must score a very large number of runs.

According to the Laws of Cricket, follow on is prescribed by paragraph No. 14. To apply it, some minimum requirements were invented:

If the start of the match is postponed for one or several days due to bad weather, the number of runs decreases. But, if the weather conditions shorten the duration during the game itself, then the requirements in the minimum amount do not decrease.

We mentioned that follow on cannot be applied automatically. Only the captain of the leading team applies such a decision. However, it does not always make sense to use this option. There are some reasons for this:

In recent years, more and more follow on is not used. There were many cases when there was a great opportunity to shorten the match time, but the teams refused it.

Naturally, according to the rules of follow on, the game does not always end with the victory of the leading club. There were only three cases in test matches when the team that was forced to continue the game won the match. So, in 1894, at The Ashes Australia series of matches, Australia scored 586 runs in the 1st inning. In response, England ended their inning with 325 points. After the match continued, England performed a real feat and won against Australia with a difference of 166 runs.

Another example is also related to Australia. In 2001, in a test game against India, cricketers from Australia scored 445 runs. India managed to score 171 runs in their 1st inning. The match continued according to the follow on rules. India scored runs and their score increased by another 655 runs. In the 4th inning, Australia was able to advance by 161 runs and was already almost resigned to a draw (there was very little time left). However, within a few minutes, the national team lost 5 wickets and earned only 8 runs. The players continued and eventually finished the series with 212 runs. Bottom line: India, under the command of Sourav Ganguly, won a potentially lost test match.

One of the positive results with the follow on rule occurred in 2017. India and Sri Lanka met each other. India scored 622 runs in the 1st inning. Sri Lanka responded with 183 runs. The team continued to bat and advanced to 569 runs in the next inning. Therefore, there was no need to hold the 4th inning.

Throughout history, the Law on follow on has been changed several times:

By the way, there is no such rule officially in baseball. Follow on is used only on unofficial games.

Our team always prepares interesting and informative articles about cricket and gambling for example Casino Gods promo code for you. Follow this sport on our website!