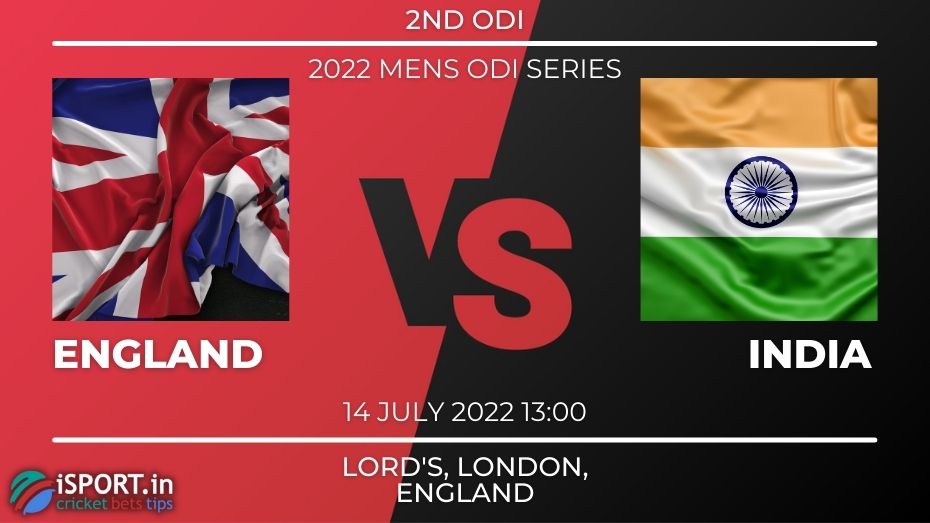 The second match of the England-India ODI series will be held at Lord’s on July 14. The teams of Brendon McCullum and Rahul Dravid have already played 5 confrontations over the past two weeks: one test, three T20 and one ODI. The opening battle of the ODI series for the British turned out to be very difficult, but maybe Jos Buttler and company will be able to rehabilitate themselves on July 14? Read our prediction for the England — India match.

The England national team has experienced very serious changes over the past few months, which have had a positive impact on the game of the “three lions”: the team, led by Brendon McCullum, began to play active and aggressive cricket, which allowed the English to noticeably improve their results. The month started perfectly for today’s hosts — England defeated Rahul Dravid’s guys in a test match and brought the series, which began last year, to a final draw. However, then the India national team managed to seize the initiative: first, England lost the T20 series with a score of 1-2 (the British took their victory already with a score of 0-2), and then the Indians confidently coped with England in the opening match of the ODI series. Although before the start of the meeting Ben Stokes, whose inclusion was supposed to add strength to McCullum’s squad, declared that they were serious about taking revenge on the Indians for the fiasco in the T20 series. However, David’s squad managed to cope with the aggression of the British from the very start of the match, and there was a feeling that McCullum’s guys did not have a plan B. India looked noticeably more powerful than its rival. It is unlikely that anything will change in a couple of days – the British will not be able to take revenge for the defeat the day before.

The India national squad had to play the first match without Virat Kohli, who again had some health problems. But the loss of Kohli does not look like something critical – Virat is in bad shape, so his absence probably even has a positive effect on the game of Rahul Dravid’s club. India team a great first ODI match with the British, and the guests will obviously try to win the series ahead of time, so India should not have any problems with motivation. Separately, we should praise Jasprit Bumrah, who played one of the best matches in his career without a doubt the day before. If Jasprit is so good today, India is unlikely to miss the win.

The India national team looks like the favorite of this confrontation: the British failed to justify the bookmakers’ trust in the opening battle of the ODI series. Today it will be very, very difficult for Brendon McCullum’s guys again. Rahul Dravid’s guys showed yesterday that they know perfectly well how to deal with the aggression of the British, so today I am ready to believe in another victory of Rohit Sharma and company: the victory of the Indian national team for 1.80