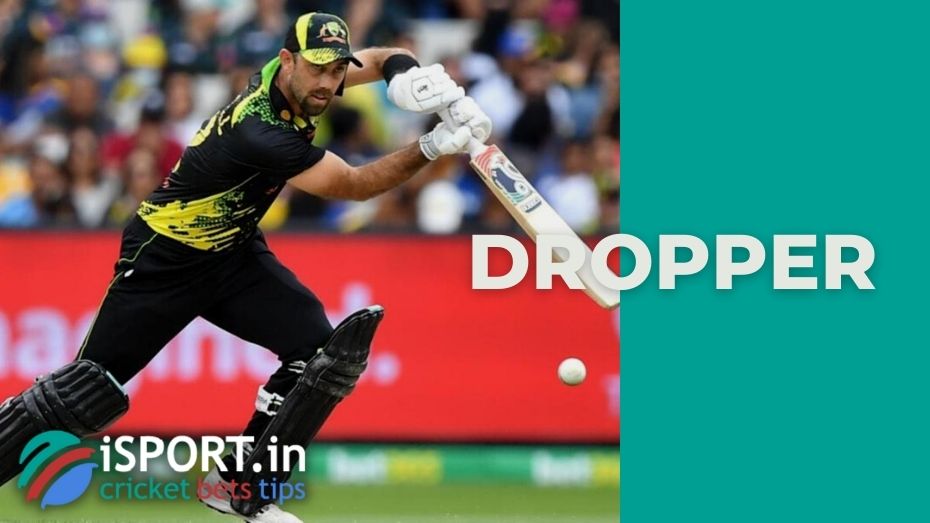 This term in cricket means lob bowling, which is no longer relevant in modern cricket. It makes sense that dropper was synonymous with lob ball. The main feature of this technique is its use when throwing armpits. With the right spin, the cricketers sent the ball at a high tempo and caused big problems for the batsmen.

It is important to note that the bowler’s hand must not be below the belt during the throw, even in the final stage of the throw. Over time, it became clear that such throws were dangerous for batsmen. The International Cricket Council eventually banned them in 1921.

The dropper is still used in informal matches. This way of throwing can be seen in the games of children and cricket fans. Beginners of this sport cannot clearly place their hands, so they are allowed to bring the ball under their armpits. Novice cricketers also find it easier to hit the balls after dropper.

Before the dropper was an illegal serve in cricket, it was used by many cricketers. One of the most famous was the Englishman George Simpson-Hayward. He was born in 1875, then attended Malvern College and Clare College. Simpson-Hayward entered Cambridge University in 1895, where he played cricket and football. In the first sport, the guy did better. His performance was noticed at the Worcestershire club, where he proved himself from the best side after ten years of tenure. George was invited to the England national team in 1910, where he played in five test matches. The debut meeting for Simpson-Hayward was successful. He immediately scored six wickets. In 1911 and 1912, the player was captain of Worcestershire. The cricketer was distinguished by the fact that he made throws at a lower trajectory than the others. This technique allowed him to constantly keep the batsmen in suspense, primarily due to the fast speed and spin that he gave to the ball. Many call Simpson-Hayward the last of their strongest cricketers to use the dropper.

In general, the last athlete who demonstrated a dropper is Trevor Molony from England. The player was born in 1897. He was educated at Repton and Pembroke College. He played for the Freshers team but was not among the leaders of this team. Digby Jephson noticed a few games with Molony, who became especially interested in his dropper. Trevor joined the Surrey team in 1921. He has proven himself great in preseason matches and got the right to participate in regular meetings. The team’s coaches noticed that the cricketer had good throws at an uncomfortable height for the batsmen.

Digby Jephson was also adept at using a dropper. He was born in 1871. From the 90s of the 19th century, he played for Cambridge University and Surrey. He acted with his right hand, directing the ball along a high trajectory with unpredictable rotation. Usually, the projectile flew either from the batsman’s side or even behind the opponent’s back.