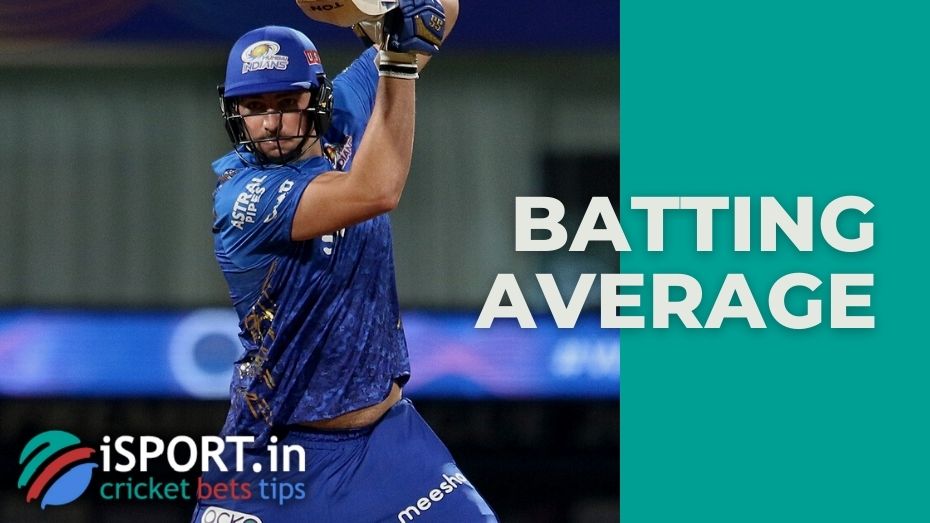 Batting average is one of the factors by which the effectiveness of the actions of cricketers is determined. To calculate the batting average, you need to divide the total number of runs by the number of times a player is eliminated from the game. This indicator is usually rounded to a decimal value. It has been used in cricket since the 18th century.

Why is the batting average considered an important indicator for any cricketer? This factor does not depend on the actions of teammates, like many others. However, there are also skeptics of this system for determining the strongest players. The batting average is not so difficult to calculate, even for a beginner in cricket. If all innings have been completed, then this indicator is considered the average number of runs they score per inning. If an innings has not been completed, then this number is the estimate of the unknown average number of runs that cricketers score for each inning. The batting average may be affected by the number of not outs. If the batsman was not removed from the game in any of the innings, then he does not receive statistics on the results of the match since dividing the total by zero will give zero.

It is important that individual calculations are applied in each cricket format and according to different criteria:

In the Test batting average format, players usually have a higher average than in other formats because the task is to score points faster in One Day International and Twenty20 International. Because of this, batsmen make more risky strokes and focus less on individual indicators.

At the end of the 19th century, about 25 was considered an excellent indicator. At that time, the heavy roller was not yet developed. Now the elite batting average is considered from 20 to 40 for attacking players. Ideally, wicket-keepers should adhere to the same rank. However, usually, players of this role compensate for this disadvantage with other strengths. Thanks to the improvement of the cricketers’ attacking qualities and the field’s reduction, it became possible to reach a batting average of around 50. For some categories, the landmarks remain at the level of the 19th century – the rank is about 25:

To get a batting average, it is often enough to play for 20 innings. This limit is made so that the statistics figures are as close to reality as possible. For example, if we take a short period of time, then the keeper-batsman from Trinidad and Tobago, Andy Ganteaume, who has a rank of 112, will be the leader in this indicator. In 1948, the cricketer played the only time for the West Indies national team in a test match against England and set a hitherto unbeaten record. He was not called up to the national team until the 1957 season. Another invitation again fell on tour with England, but nine years later, Gantenaume did not get the opportunity to enter the field because of his slow scoring.

Another thing is Don Bradman from Australia, who is considered the greatest batsman of all time. During his career, he has a batting average of 99.94. His rise in his career was rapid. Already at the age of 22, Brandman has set several impressive records. He continued to perform successfully during his 20-year career. An attacking style of play distinguished Don. Spectacular blows characterized his performances.

No one managed to reach Don Bradman’s record. At the same time, six players have a score above 60 at once, among them four Australians.

In First Class matches, nine players have a batting average above 60 at once. Among them are representatives of five countries, most of them from India.

In the One Day International format, the best indicator is the representative of not the most famous country in cricket — the Dutchman Ryan ten Doeschate (67.00). The runner-up Virat Kohli from India can only boast a rank of 59.33.

In the Twenty20 International format, only two players have a batting average of more than 50 — Virat Kohli (India) and Dawid Malan (England).

The batting average system is also effectively used in baseball.