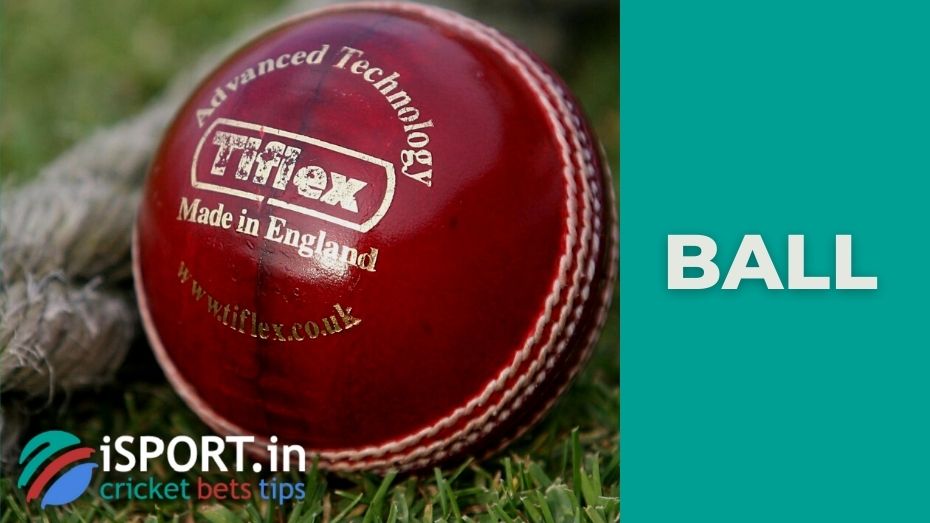 In all game sports where the ball is used, the team scores points when the ball hits a certain zone. In cricket, the ball originally belongs to the attacking team. In this discipline, a fairly heavy and powerful projectile is used, so players often get injured.

In cricket, the word ball has two meanings. This is the ball that is used in the game. The bowler guides it, and the batsman tries to hit it. The round-shaped ball is covered with leather and has several seams, thanks to which it can take unpredictable movements.

The second meaning of the ball is a one-time delivery. Six balls are allowed in each over.

Ball: what is it made of?

For the ball to be used in official cricket matches, it must be certified according to British Standard BS 5993. The classification specifies the requirements for the size, quality and other characteristics of the ball. A cricket ball is made of cork. The second layer is a tightly wound thread, and then everything is “packed” in a leather case. It is also important to note that there must be a seam when making the ball. To understand how the leather covers the ball, experts suggest imagining an orange, the coating of which is divided into four parts. At the same time, one hemisphere is rotated by 90 degrees with respect to the other. In the middle, the cricket ball is sewn with a string with six stitches. Two more seams pass from inside the ball, and this allows you to form a quarter seam.

The process of making training balls is simpler. Also, for the sake of safety, children who are starting to be engaged in cricket, at first, do not use the standard ball for this sport at all. They like to play with tennis balls. To make them look like cricket balls, half of the ball is wrapped with tape.

Ball: how are they used in the game?

The player must have a certain skill and know how the ball behaves in flight to show good results. This is influenced by both the movement of the hands during the swing and the accentuated work in the final part of the throw. It is important to note that cricket balls are heavier than baseball balls. There are three types of the ball in cricket:

In football, several balls of the same type are used during the game. Usually, they very rarely fail. In tennis, athletes play only the first seven games with one set of balls, and then, with a sequence of every nine games, they are replaced. In cricket, the replacement of balls occurs only in the allotted time. It depends on the state of the ball and the format of the match:

Players have several reasons to contact the umpires and ask for a replacement for the ball. First of all, we are talking about damage and loss of the ball. The umpire can also appoint a replacement of the ball if the player damages it. In test matches, the captain of the team that is going to attack after 80 overs also has the opportunity to request a change of balls. If the ball accidentally hits the stands, the spectators must return it. Thus, the game will continue with the same ball. If the audience steals the ball suddenly, the umpire must provide the players with a ball of exactly the same type.

Given the fact that in cricket, one ball is used for a long time, its surface wears out and becomes rough. To correct the situation, bowlers resort to various tricks. For example, they wipe the ball on their clothes. Sometimes you can notice that noticeable stains remain on the trousers of cricketers. At the same time, the cricket ball is only half amenable to a kind of polishing. In this way, bowlers are trying to create a “swing” as it travels through the air. Players can also use the state of the ball to create a reverse rotation. Due to its configuration, a cricket ball can noticeably change its trajectory after bouncing.

To avoid constant manipulation from cricketers, special bans were created for certain actions:

If the ball is out of play for some reason, then fast bowlers like to play the new ball. They take advantage of the greater unpredictability of the rebound from the field. At the same time, old balls are more suitable for spin bowlers.

Cricket balls vary slightly depending on the manufacturer. The main manufacturer is considered to be Kookaburra, the main office of the company is located in Melbourne (Australia). Kookaburra white balls are used for Twenty20 format matches. The red balls of this company are used in meetings of the Test format. They are preferred by all the leading countries in the world in cricket, with the exception of three:

The following characteristics must be observed by the organizers of the competition when providing balls, depending on the age of the participants:

A cricket ball can reach a speed of 160 km / h during flight. Given the size of the projectile, players always need to be alert and act as safely as possible for themselves. It is not surprising that recently batsmen are trying to wear helmets, including Australians who have a national cult of the famous baggy green.

The first information about the victims of the cricket ball appeared in the 18th century. According to unofficial information, in 1751, Prince of Wales Frederick was injured shortly before his death just in a cricket match. Unfortunately, later there were several more unpleasant cases, a large number of which belong to the 21st century:

Experts draw attention to the fact that coaches working with children need to constantly remind their wards about the danger of a cricket ball.