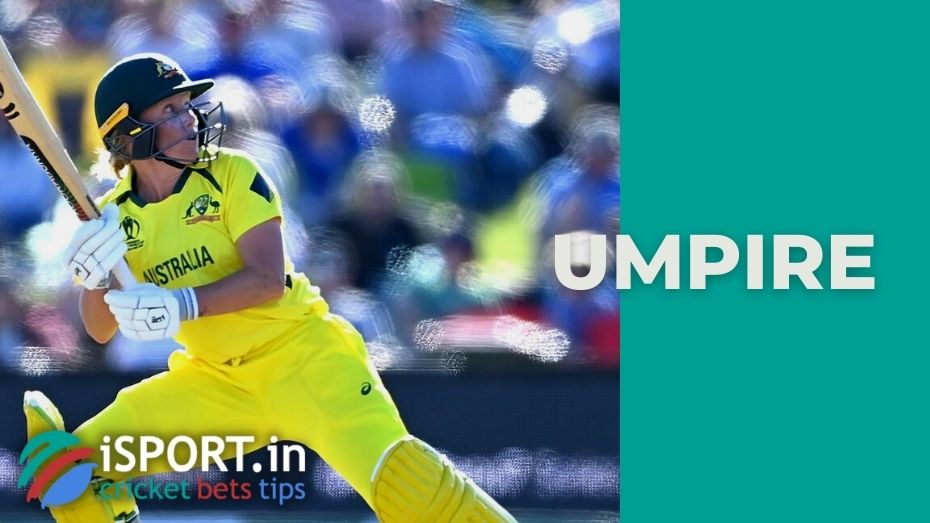 An umpire is a referee who makes the final decisions on game episodes following the Laws. Its task is to determine the nature of the serve, receive appeals, keep statistics, and also announce the end of overs. The umpire should not be confused with the referee (the latter only judges international matches and has no influence on the outcome of game episodes).

In traditional cricket, there were two umpires on the field. The first was located next to the bowler (Bowler’s end), the second was directly opposite the batsman slugger on the square leg, and at the end of each over, they switched roles. However, in modern matches, their number can increase to four: in addition to two field judges, another is responsible for video views, and the latter is in charge of the balls (in addition, he can also bring drinks to the field judges).

According to the ICC Code, the umpire can be classified into one of three categories:

Neutral representatives of the first group, as a rule, judge test matches, while international players perform the duties of the second and third umpire. Representatives of all three groups serve ODI and T20I matches.

It is worth noting that at professional matches, there may be an additional referee who does not make key decisions but carefully monitors that the players comply with the code of conduct and what happens on the field corresponds to the so-called spirit of cricket, or the spirit of the game. As a rule, referees are appointed from the rosters of the elite collegium.

Minor games are most often served by judges trained by the ECB Association of Cricket Officials, created in 2008 on the English Association of Cricket Umpires and Scorers. Each of the candidates who have passed the two-tier accreditation procedure can apply for the corresponding position, while the Umpires can vary markedly in age, background and experience, as many of them are former players.

One of the main goals of the umpire is not to discourage players. So, for example, if a batsman tries to execute an injury, then the umpire, who is located behind the wicket, must move away to prevent the fielders from organizing an out. According to unspoken tradition, the second umpire usually chooses the square leg sector to provide the best viewing angle but can move if necessary (for example, if the sun is declining and visibility has deteriorated).

There is a whole section of Laws dedicated to judges, number 2:

2.1. Appointment and presence. Before the match, two umpires are assigned, one for each edge of the pitch. Their main responsibility is to supervise the game in accordance with the Laws while maintaining absolute impartiality. 45 minutes before the start of the match, they must appear on the field and report to the organizers.

2.2. Replacement of the umpire. The referee cannot be replaced during the match (except for extraordinary circumstances, such as illness or injury). If the appropriate decision is made, the new umpire can only close the position next to the striker without additional coordination with the captains.

2.3. Consultations with captains. Before the draw, the umpires must:

2.3.1. Meet with the captains as it is their responsibility to determine:

2.3.1.2. The timing of the match, as well as the regulated breaks. If the match is one day, then tea breaks are not discussed additionally. However, the fifteen-minute period itself can be postponed to the interval between innings;

2.3.1.3. What watches and additional chronometers will be used during the match;

2.3.1.4. The boundaries of the playing field, as well as the resolution of access issues and other small details (for example, whether this or that object within the field will be considered as an obstacle);

2.3.1.6. Any additional conditions that may affect the course of the game.

2.4. Gate, crises and borders. Prior to the start of a match, the umpires must ensure that:

2.4.2. Markups of creases are marked according to the rules;

2.4.3. The boundaries of the playing field are within acceptable limits.

2.5. Match holding, inventory and equipment. Before the start of the draw and during the match, the Umpires must ensure that:

2.5.1. The game is played in strict accordance with Laws;

2.5.2. The equipment used by the players meets the established requirements.

2.6. Fair and unfair play. Only umpires have the power to determine whether a game is fair or unfair.

2.7. Compliance with the conditions of the game.

2.7.1. The umpires alone decide whether the conditions of the pitch and the weather and lighting are suitable for the match and whether it is not dangerous to continue playing if they change. Moreover, the listed conditions cannot be recognized as dangerous because they do not correspond to the ideal. So, for example, if the grass and the ball are wet, this cannot be considered a reason to stop the match.

2.7.2. The conditions are considered dangerous if the further continuation of the game could harm the health and safety of players and the umpires.

2.7.3. The conditions are considered inappropriate if there is no obvious risk, but the continuation of the match itself does not make sense.

2.7.4. If the umpires ruled that the moisture level prevented bowlers from maintaining balance, fielders from moving freely, and batsmen from deflecting and running, the game conditions were declared dangerous and inappropriate.

2.8. Suspension of a match under dangerous or inappropriate circumstances.

2.8.1. All of the following points affect both the pitch itself and the players on it.

2.8.2. Umpires are obliged to immediately postpone the game or reschedule the start/restart of the match after a pause if the state of the court, weather conditions, lighting and other circumstances are potentially dangerous;

2.8.3. If play has been postponed, the umpires must continue to monitor field conditions. The help of players or officials is not allowed in this case. Once the umpires conclude that the conditions are no longer a threat, they must re-invite the players to the field;

2.9. Umpires positions. The referees should be positioned on the field so that they can see the players’ actions as best as possible, which in turn makes it possible to assess the episodes of the match adequately. At the bowler’s end, the umpire is obliged to choose a position taking into account the interests of the bowler and the batsman, that is, not to interfere with serving one and not blocking the other’s view. The umpire, located on the striker’s side, has the right to choose not on side but off side, but in this case, he must inform the captain of the field team, the striker himself and another umpire in advance.

2.10. Change of position. Umpires must switch sides after each side completes its inning.

2.11. Final solution. In case of disagreement, the umpires make the final decision collectively.

2.12. Change of decision. Umpire has the right to change any decision, but only on the condition that it is announced immediately; if this requirement is met, the decision is final.

Umpires use a special sign language, with the help of which they notify those on the field about the decision made:

Separately, it should be clarified that consultations between the umpires are mandatory and held by default throughout the match. Umpires must constantly check the number of runs performed, wickets destroyed and overs played, as well as update the final score, after which it is considered unalterable.

Interestingly, the term umpire migrated into English from Old French, where it originally sounded like Nonper (“not equal”). In the Middle Ages, this word, as a rule, meant a person who was invited to act as an arbiter in a dispute between two people, provided that he had no personal interest in this matter. In the XIV century, the term sounded like Owmpere, and a little later, it lost one letter and turned into Oumper – Umpire.