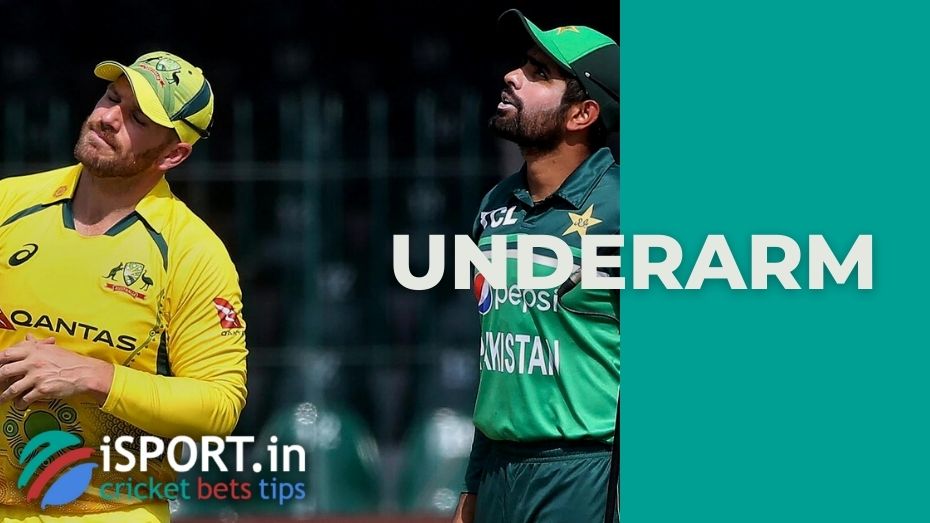 An underarm is a type of bowling technique that is considered one of the oldest in cricket. Unlike the roundarm, it assumes a bottom serve from a forward lunge position – the arm is lowered below the lumbar level. There is an assumption that the underarm was at the origins of modern bowling as such, and the impetus for the development of cricket was given by the appearance on the court of a second player armed with a bat.

Even though the history of cricket is very well studied, there is no consensus on the evolution of underarm. It is generally accepted that early bowlers served the ball in only one way – rolling it on the ground and experimenting with only speed and direction. In the second half of the 18th century, a mini-revolution took place in cricket: bowlers invented a new way of serving, which ended the so-called “era of pioneers”. Soon, the basic rules for serving in cricket were defined, and the first straight bats appeared at about the same time, which eventually replaced club-shaped ones (John Small from Hambledon is usually mentioned among the most likely inventors of this type of bats, which, however, has not yet been proven ).

It is noteworthy that the first of the well-known editions of Laws from 1744 did not touch upon the specifics of serving at all and did not restrict bowlers in the way of working with the ball in any way. The only major exceptions were the position of the feet of the attacking player and the ban on the spade, which suggests that the referees made decisions on an individual basis.

One of the first experimental bowlers to gradually move away from the classic Underarm was Edward Stevens, playing for Chursty and Surrey. He was distinguished by a good sense of the field and knew how to find potentially vulnerable spots of the enemy. Thanks to his observation and an impressive arsenal of various strikes, he became a reference point for the next generations of bowlers who did not want to be limited to simple underarm – Brett, Harris, Lamborne and others.

The underarm bowling continued to maintain its dominant position in cricket until the cricket pitch improved gradually. If in the early stages of the development of this sport, the grounds were uneven and bumpy, then later processing them before matches became mandatory, which could not but lead to a drop in the popularity of underarm, which made serving too easy for batsmen. However, early innovator bowlers faced condemnation: for example, one of the most prominent attacking players of the late 18th century, Tom Walker, was accused of cheating because he raised his hand to the level of his waist when serving.

So the underarm is gradually being replaced by the roundarm, which got its name due to the hand’s position at the moment of serving (at a distance from the body, while the working wrist can arise from the waist to the shoulder). Admirers of this style were John Wills, William Lillywhite and Jem Broadbridge, thanks to whom the Roundarm reached such heights that it was eventually officially recognized and reflected in the 1845 amendments to the Laws.

However, all this does not mean that underarm quickly lost ground. For a while, both techniques continued to coexist successfully, and it was only with the advent of Overarm that the popularity of underarm gradually faded away. Already at the beginning of the twentieth century, this technique was rarely used – for example, in situations where the bowler was injured and could not serve in another way, or he tried to close the over, having no ball in his account.

One form of underarm, lob bowling, has long been the subject of bitter controversy. Despite the popularity of such players as the hero of the English series of 1909-1910 George Simpson-Hayward, famous for their manner of insidiously spinning the ball at a low height, experimenting with speed. Lob bowling is gradually becoming synonymous with foul play in attack, although the laws have long bypassed this moment of silence. In particular, one of the most annoying lob bowling techniques was considered the so-called donkey drops – serving from the maximum possible height “behind the collar” to the batsman while simultaneously destroying the wicket.

Lob bowling can be found mostly in provincial and children’s cricket these days. On the test level, as in the limited-overs format, it has practically not been applied since 1981, when the Australians used one of the popular elements of lob bowling to prevent the New Zealand team from leveling the score in a principled match. Soon a clarification appeared in Law 42.1, according to which players were prohibited from using Underarm without prior approval. In all other cases, the bowler faces penalties, as the ball on service must not fall below the batsman’s waistline.

Thus, even though underarm has not yet become history in the first half of the twentieth century, its popularity fell to almost zero. The vast majority of players who have used or are using this technique in one way or another these days do so either in protest or in the hope of avoiding more serious consequences (for example, the team’s loss on the last over or the announcement of an additional no ball). Most experts agree that underarm is a thing of the past and is unlikely to return to its former positions, especially given the fact that even the most unkempt of modern pitches is not conducive to its use.

Interestingly, despite the rapid decline in the popularity of underarm, some players continued to use elements of this technique for a long time. So, for example, Charles Palmer was considered a recognized master of donkey drops, who played for Worcestershire and Leicestershire in the middle of the 20th century and died in 2005.