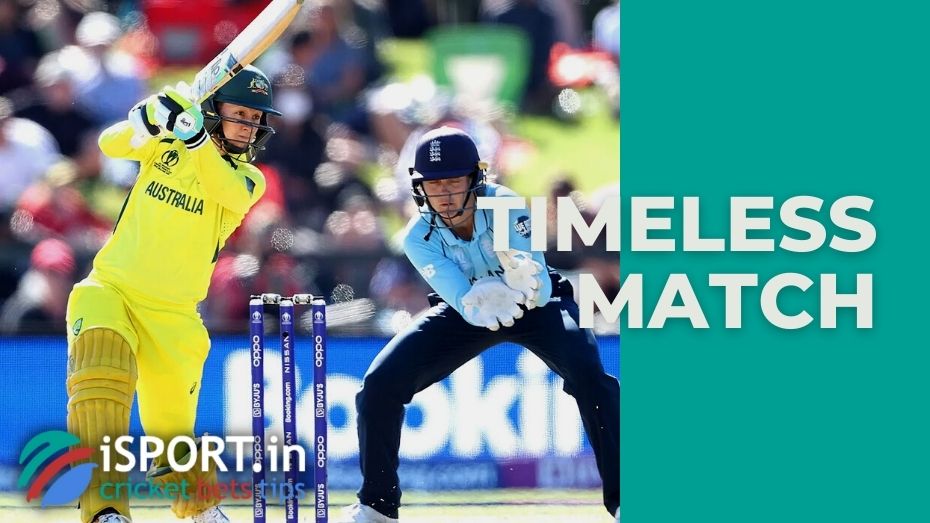 Timeless match is a match in test cricket, which is held without time limits. In practice, this means that the game will last until one of the teams wins or the score is equal.

It is important to keep in mind that in cricket, there are actually two terms that denote a draw:

A timeless match does not involve the very possibility of Draw, so there is no point in playing to hold the account in such circumstances. Even bad weather can not interfere with the completion of the match with a positive result (that is, in favor of one of the teams). In addition, the teams have less reason to declare an inning since the time restrictions are actually removed.

In fact, a Timeless match should guarantee the result. Still, its main disadvantage is that neither the players, nor the management, nor the organizers can predict how long it will last and when it will end, which in turn negatively affects planning (including commercial risks). Nowadays, it is not uncommon for teams to play consecutive test matches over two weeks, which would not be possible without a five-day limit.

In the period from 1877 to 1939, 99 Timeless matches were held. It is interesting that before the beginning of the Second World War, virtually all test matches that took place in Australia fell into this category, and only two of them ended with a Draw result due to transport overlays (in both cases, the opponents of the Green Island team were the British). The fact is that during this period in Australia, there were serious problems with pitches: even well-watered and prepared, in local conditions, they quickly dried up and cracked, so by the fourth or fifth day of the game, the batsmen could barely cope with their duties. The longest test match in Australia took place in 1929: the teams spent eight days on the field, and the victory remained for the hosts, who beat the guests by five wickets.

The first Timeless match in England took place in 1912 as part of the Triangular Tournament. Subsequently, this scheme began to be regularly resorted to outside of Australia – primarily in cases where the outcome of a particular match depended on the outcome of the entire series. So, for example, in 1930 in Kingston, the fourth and last test match between the West Indies and England teams stretched for seven days and was eventually canceled due to restrictions on the travel schedule of one of the teams.

The first Timeless match in South Africa took place in Durban in 1923, when after a four-match series between the hosts and the British, the winner was not determined. As a result, the England team did not easily manage to prevail over the South Africans only on the sixth day of the Timeless match.

It is noteworthy that the last test Timeless match was held there (Durban, South Africa) in 1939. The game between England and the representatives of the local national team lasted for twelve days, and none of the teams managed to tip the scales on their side. When it became clear that the British could miss the flight home, the organizers decided to fix the Draw, even though the visiting team managed to set a record in the fourth inning (654/5).

This is interesting: the ICC considered the possibility of introducing a Timeless match format for the final of the World Test Championship, but the idea remained on paper.