Throwing in cricket: a detailed overview of the term 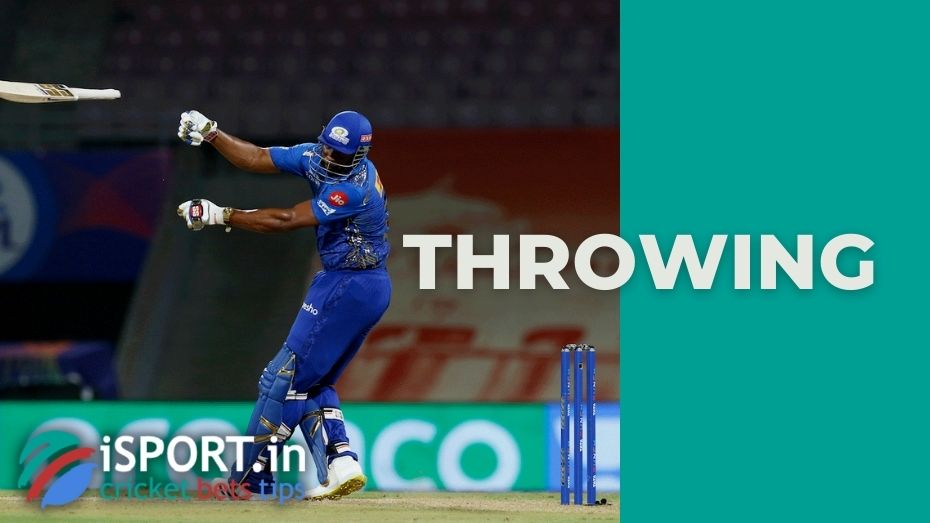 Do you think that it is very easy to play as a bowler? Threw the ball – and that’s it? In fact, there are many rules in cricket that govern the game of a bowler. If you deviate from them, the throw may not be counted.

One of the most serious and, at the same time, controversial violations of the throw is “Throwing”. Discussions on this issue have been going on since the 19th century, and there is still no clear answer whether “Throwing” is permissible in cricket. In this article, we will try to reveal this term in detail, but at the same time not to overload you with information.

Throwing in cricket: what does this term mean

To begin with, we will give a detailed definition of the term “Throwing” so that readers will understand what this word means in the context of cricket.

Throwing is an illegal bowling action that occurs when a bowler straightens the arm with which he serves the ball.

Now let’s go through the details. The fact is that the Laws of cricket determine that only the rotation of the shoulder can be used to give speed to the ball. This means that the bowler’s arm should not be fully straightened. If the referee considers that the ball was thrown incorrectly, he will declare a no-ball. Therefore, the batsman cannot be removed from the game by this serve.

The International Cricket Council (ICC) rules set the permissible limit for straightening the elbow joint. For all international cricketers, it is 15 degrees. This law applies between the point at which the bowling arm passes above shoulder height and the point at which the ball is released. Its main purpose is to allow some natural flexion of the elbow joint, which can occur during a properly made throw.

You can read more about “Throwing” in cricket rule number 24, paragraph 3. It also states that this definition should not prevent a player from bending or turning his wrist when serving.

Throwing: some moments from history

Now let’s go through some moments in the history of “Throwing” and tell you how this phenomenon manifested itself at different times. By the way, an interesting fact: before the appearance of advanced biomechanical and audiovisual technologies, “Throwing” was determined by field judges exclusively visually. Of course, because of this, there were many disputes and misunderstandings.

For example, the first cricketer to be accused and admitted to using “Throwing” was the Australian cricketer Tom Wills, one of the most respected players of the mid-19th century. Interestingly, the player used a special trick to distract the umpire’s attention from time to time. He reported that he had a bad habit from time to time of going over the crease, and the judge should look at his feet, which he did while Tom threw with all his might.

The players who were considered the most dangerous on the field were also suspected of “Throwing”. For example, such a player was the fast bowler from the West Indies, Charlie Griffith. A lot of attention was focused on him, but no serious violations were found in the end.

Also, a very important turn in the setting of “Throwing” rules occurred in 1995. Then, in relation to Muttiah Muralitharan, a well-known cricketer from Sri Lanka, the judges ordered a check due to suspicion of violating the rules. However, the dispute over his actions led to changes in the laws of cricket, thanks to which “Throwing” was legalized, except for those moments when it goes beyond the “15 degrees”, which we wrote about above. In high-level games, this standard solves the problem of bowlers who commit Doosra off-spin. However, it is very inconvenient for young bowlers who do not have enough training to prevent exceeding the established standard.

Throwing: how the request is processed

There is a certain procedure by which it is established whether a player has violated the rules. If the umpire or other official believes that the bowler has violated Law 24.3, this is described in detail in the match report, which is then transmitted to the chief referee. Within 24 hours after the end of the game, the match referee provides the team manager and the ICC with a copy of this report. A statement is also published in the media that this player was reported.

Then the debriefing begins. An independent check is being carried out against the player who allegedly made the “Throwing”. The members of the ICC Commission organize it. If during the check it is established that a player has indeed violated the rules, he is immediately suspended from all international cricket competitions (but can continue to participate in domestic tournaments under the supervision of a special commission) until he fixes the throwing style to match the rules. However, if only a particular type of throw is illegal for a bowler, he can continue playing cricket but not using the wrong throw. In addition, the bowler can continue to play international cricket for the entire time while an independent check is being carried out.

If a player does not agree with the decision to suspend him, he can apply for an additional review of the case. Then the commission, consisting of bowling experts appointed by the ICC, will re-examine the arguments and decide by a simple majority on the legality of the player’s actions. If the previous commission really made a mistake, the disqualification is immediately lifted.

If a player is suspended for “Throwing” repeatedly for two years, he is automatically suspended from the game for a period of one year before he can apply for a review of his actions.

Now you know the main theses concerning “Throwing”. However, there are many other interesting terms in cricket. Stay tuned for updates on our website so that you don’t miss anything.