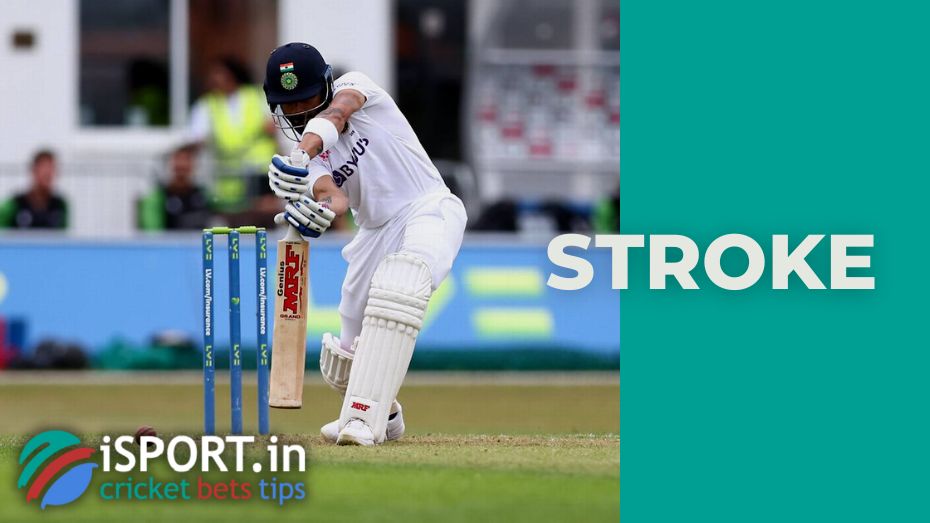 A stroke is a hit with which a batsman deflects the ball. It is one of the key criteria by which you can get an idea of ​​the level of his professionalism.

Basic stroke elements are used to a greater or lesser extent by all batsmen. In addition to the hit itself, they also include the ability to correctly choose a position on the pitch and maintain balance in the position of the torso and limbs at the time of the ball’s reflection (in particular, the skill of a timely turn along the line of its movement is considered especially valuable). Equally important is the acquired ability to predict the direction of the projectile after bouncing and the correct choice of the stroke variety in a specific game episode.

As a rule, a batsman’s decision is determined by a combination of factors, starting with the opponent’s technique and the speed of his delivery to the peculiarities of the pitch and weather conditions. Depending on all of the above, the player can opt for a vertical or horizontal stroke, transfer weight to the front or back leg, and so on.

The second important factor that directly affects the choice of stroke is the format of the match. With ODI reaching its peak in popularity, batsmen needed to improve their usual techniques since a quick set of points is important in the limited-overs format. This is how the first unorthodox strokes appeared, which differed from the traditional ones primarily in the direction of the projectile. At the same time, they are considered potentially dangerous for the batting team, which is why many batsmen prefer to play it safe and use the classic strokes arsenal.

Thus, any stroke can be classified into one of three groups:

A vertical stroke can be applied with an emphasis on both the front and back legs, however, in both cases, at the moment of meeting the ball, the bat must be raised in a vertical direction, and the player’s head must be strictly above the point of reception of the projectile. Vertical strokes typically include:

A sefensive strike (commentators often call it “soft hands“). It is performed with a wide spade and, depending on which leg the player is leaning on, it can be either front or back. The defensive strike is more often practiced in a test format, where batsmen are not required to score points at an accelerated pace. One of the main features of this type of stroke is that relatively little force is applied to execute it since the main purpose in such a case is to protect the wicket, creating space for the runs whenever possible.

One of the more interesting defensive strokes is the so-called Leg glance, in which the ball is directed towards the Leg side with a slight wrist twist at the last moment.