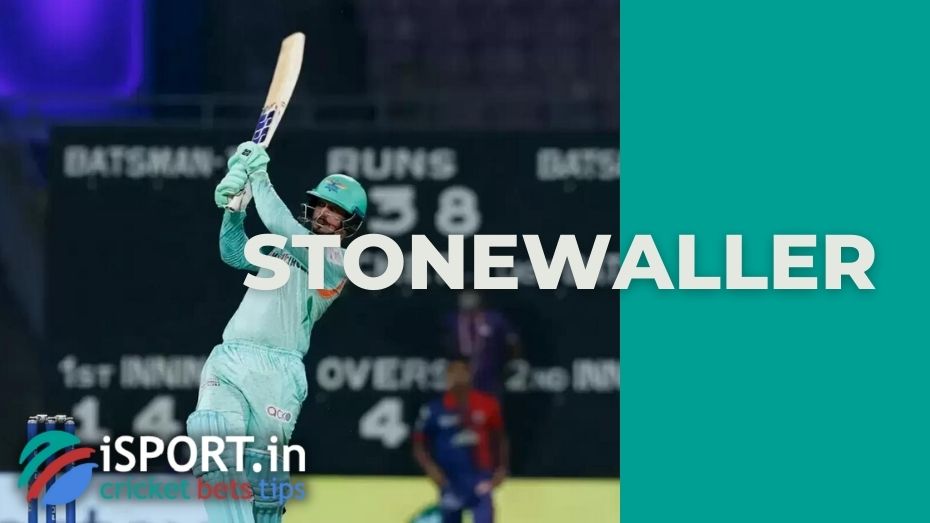 Stonewaller is a batsman who uses defensive tactics aimed primarily at defending the wicket rather than getting many runs. As a rule, a stonewaller’s main goal is to level the score if his team is behind the enemy in the number of runs.

The stonewaller’s performance can be seen primarily at test events, where matches stretch over several days. Batsmen can afford to go into a defense that does not involve running because of the slower pace, which is not typical of the limited-overs format. In general, the stonewaller can be called a rather specific role on the field, because, for the modern viewer accustomed to entertainment, such a tactic looks boring and incomprehensible.

However, the stonewaller’s position is not only not new in itself but also largely underestimated. In the 19th century, the slowness of batsmen did not surprise anyone, so many stonewallers, including William Scotton, Bobby Abel, Dick Barlow and Alec Bannerman, enjoyed well-deserved popularity. For example, in one of his matches, Barlow made only five runs in 87 four-ball overs and lost all partners, who earned a total of 69 outs. Alec Bannerman, nicknamed the Rat, also set a kind of record – 91 runs for 620 balls in a test match, and he reflected 90% of all the balls.

In the twentieth century, stonewaller’s popularity gradually declined. Yet the interwar period gave cricket several notable names, including Ali Khan Pataudi, who was much disliked by Australian fans who considered his game almost provocative. The tradition laid down by the famous Indian was later continued by Trevor Bailey, who once completed only 68 runs for 427 goals in a test match. Trevor’s equanimity quickly became a reason for jokes: in particular, sports journalists entertained themselves by placing bets on how many balls he would need to reflect to perform the next run.

These days, when fast-hitting skills are valued far more than defensively, it’s not often that you see batsmen who play the role of pure stonewallers. That is why cricket commentators pay attention to the temporary change in the role of batsmen who, for one reason or another, are forced to play in this position and have achieved success:

Interestingly, one of the most famous stonewallers of the second half of the twentieth century was Australian Lindsay Hassett, who was spoken as one of the slowest batsmen of all time. In one of the matches attended by his brother, Lindsay approached a hundred (96) for the first time in his career. However, on the same day, his brother had a wedding, so he left the stands for a while, and when he returned, he found that Lindsay had taken only one additional run.