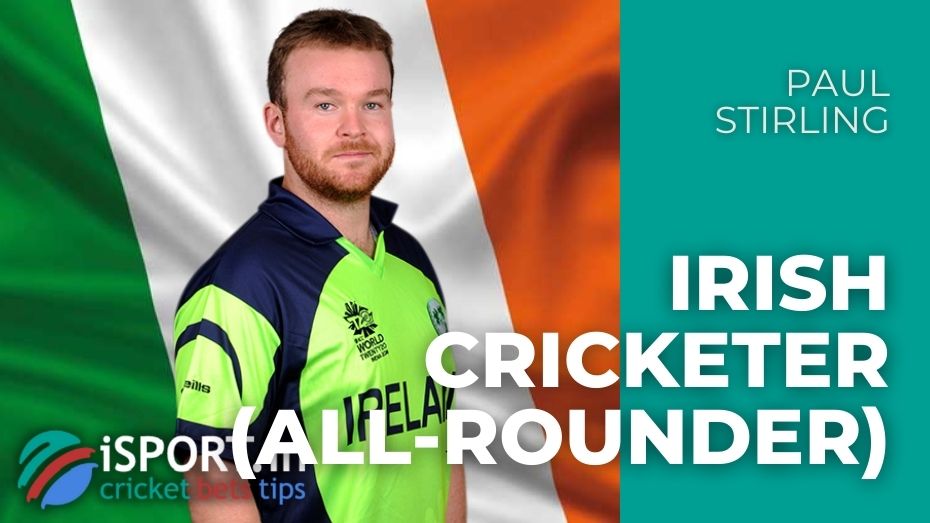 Paul Stirling was born on September 3, 1990 in Belfast, Northern Ireland. The main position is a batsman, but if necessary, he can act as a bowler. He is one of the ten most effective Irish players in the T20I and one of the eleven debutants to make his first national team test in 2018. He was appointed as a vice-captain in June 2020.

Stirling managed to play for the youth team of Middlesex and Second XI. Having signed a three-year contract with the club in 2009, he defended his colors for several seasons, both in T20 and in List A. The Middlesex director Angus Fraser justified the invitation of the young batsman as follows:

Paul has proven himself well in the youth team. We are happy to sign him because we saw him play for the Irish national team. It definitely made an impression.

Stirling first tried his hand at ODI (match against the Worcestershire) in April 2011. Although the team failed to clear the group stage of Clydesdale Bank 40, he significantly improved his personal performance, making 535 runs in 12 matches.

After leaving the Middlesex for one season, Stirling subsequently returned, re-signing an agreement with the club. Apart from appearances in the County Championship, he also managed to play in the cricket leagues of Sri Lanka, India and Pakistan:

Paul Stirling made his Irish debut in First Class (Intercontinental Cup) in the spring of 2008. The same season saw the first performance of the batsman at ODI.

He became one of six Irish people to receive a permanent contract from Cricket Ireland in 2009. Having scored his first hundred in July, Paul continued to progress, and the next year he took part in the World Cup U-19 in New Zealand. Despite the fact that the team failed to compete for the trophy, Stirling scored the maximum number of runs – 209 in five matches.

In 2010, Paul was nominated in two prestigious ICC Awards categories – Progressing Player of the Year and Associate and Affiliate Player of the Year. And even the Irishman wasn’t on the shortlist, ICC spokesman Richard Holdsworth noted:

I think the fact that Paul Stirling was nominated in two separate categories is fantastic in itself. The fact that his merits are being recognized at this level once again demonstrates the scale of the progress of associated cricket.

The following season, Stirling entered the World Cup bid. Despite the team stopping at the group stage, the Irish managed to show class in the match against the Netherlands, and Paul and team captain William Porterfield made 177 runs for two, setting a new record. Stirling’s statistics were so convincing that soon he again received an ICC Awards nomination along with another representative of the national team – Kevin O’Brien.

The Irish won the Intercontinental Cup for the second time in history in 2012. Stirling breaks his personal best again: in an episode of the ODI series against Afghanistan, he, along with Rashid Khan, becomes the second bowler to score six wickets on his team’s account.

Stirling’s contract with Cricket Ireland was renewed in December 2018. In the spring, the player received an invitation to the first test match in the national team’s history, and he became the first Irishman to record 4,000 runs in the ODI six months later.

Paul was included in the main squad of the national team in the ICC T20 World Cup qualifier held in the UAE a year later. After getting another chance to prove himself, he again became the best in the number of runs in the tournament (291 in eight matches). Stirling was named vice-captain of the national team in June 2020. He scored 12th hundred – more than any representative of Ireland in the ODI in a series of matches against Afghanistan a few months later.

Paul Stirling: questions about the player