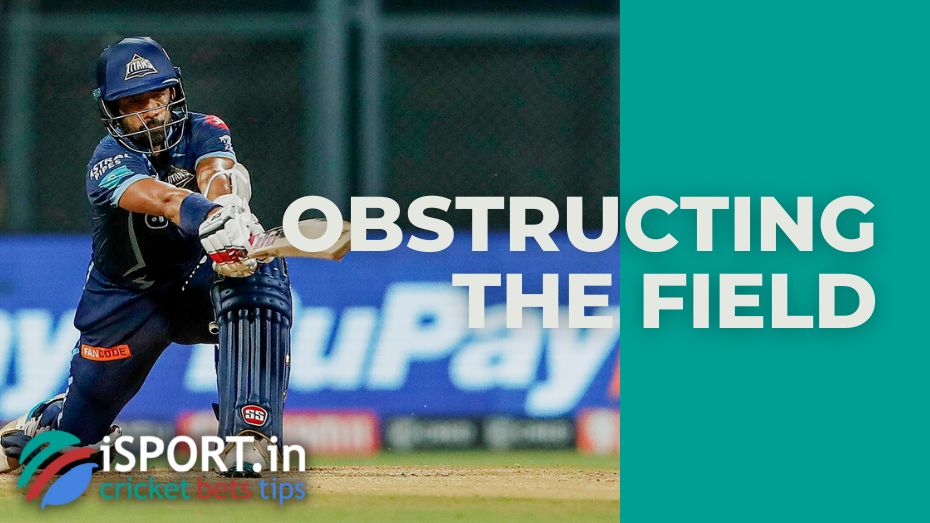 Of course, to protect your wicket at any cost is a very commendable and noble act. However, not all methods are legal. In this article, we will consider a non-widespread method of dismissing batsmen called obstructing the field. We explain what this method is and give a number of historical examples.

Obstructing the field – what does it mean?

In cricket competitions, the main task of the batting team is to knock out a player with a bat in various ways. There are ten main ways to remove a batsman from the game. The most common of them are:

Obstructing the field is also one of the ways to dismiss a player with a bat, but unlike others, this method happens quite rarely. The Law is prescribed in the Laws of Cricket under No. 37: according to the match referee’s decision, a batsman can be punished if he intentionally tries to prevent fielders from getting the ball or knocking out a wicket.

According to Law No. 37, there are three specific cases where a batsman can leave the field due to obstructing the field:

Based on these 3 cases, other reasons may arise. The match referee makes the final decision on the dismissal of a player with a bat. By the way, if the batsman did not get a serve to knock the ball out for a pitch, he can legally use his feet to hit (for example: missed with the bat – hit with his foot). It should be noted that almost all runs earned before obstructing the field are counted (exception: if a player with a bat at the last moment of the run prevented him from knocking out a wicket).

Historically, obstructing the field happens rarely. Therefore, for the entire period of cricket competitions, such situations can almost be counted on your fingers.

The first recorded case occurred in 1792 at a match between the English teams Sheffield Cricket Club and Bents Green Cricket Club. The culprit was the player from Bents Green – John Shaw. During the delivery of the ball to the pitch by fielders, John violated point No. 2; that is, he on purpose prevented the serving team from knocking out the wicket.

Only one such case was recorded at the test championships, which occurred in 1951. The author of the incident was Leonard Hutton (formerly an English professional batsman). At the match against South Africa, the match referee removed Len for a violation related to obstructing the field.

And here is a list of players (8) who were dismissed for the same reasons at matches of the One Day International format:

There is also a well-known case in women’s cricket. In 2016, at an ODI match between India and West Indies, Indian Thirush Kamini interfered with fielders and was dismissed for obstructing the field.

There were only 2 cases at the Twenty20I format games: in 2017, an Englishman Jason Roy did it, and in 2019, a player from the Maldives national team – Hassan Rasheed.

There are also a number of deletions that have been registered at domestic championships in different countries. We will not list them. By the way, all batsmen associated with obstructing the field are listed in the list of unusual dismissals in international cricket.

Our team always prepares interesting and informative articles about cricket and gambling for example Nomini promo code for you. Follow this sport on our website!