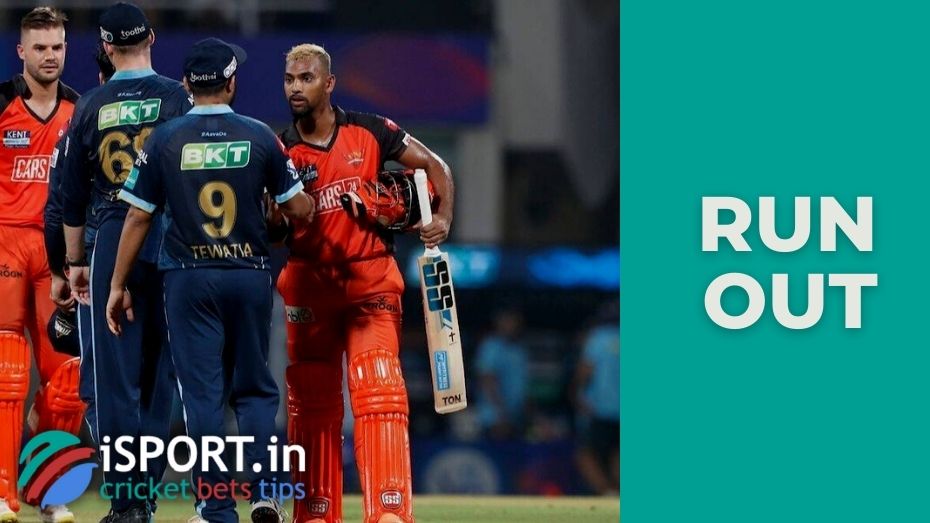 Run out is one of the ways to remove a batsman in cricket, which is regulated by No. 38 Laws.

Run out most often happens when attacking players manage to deliver the ball to one of the wickets before the batsman, trying to make a run between the wickets, crosses the crease line. Runs in such circumstances are not counted.

There are three mandatory conditions for declaring Run out:

In this case, Run out can be declared regardless of whether the player with the bat performed a run or not and whether the judges determined the serve as No Ball. It is enough for the ball to go towards the fielder after touching the bat or bouncing off the court. Run out is one of the most difficult tests for a batsman because he must have an excellent reaction not to allow the fielders to drive themselves into an out; this can be very difficult to do since you have to keep several fielders in sight at once.

However, there are a number of exceptions to this rule. So, Run out is not declared in situations when:

As a rule, Run out is declared if the batsman was on the same part of the pitch at the time of the destruction of the wicket. At the same time, all the runs made before the removal according to this criterion go into the piggy bank of the defending team.

Run out is not included in the bowler’s game statistics. At the same time, when interpreting a specific episode, the fielder who took part in the destruction of the wicket can be recognized as:

It is worth noting that Run out is one of the most common ways to remove a batsman in cricket. So, in test matches, he takes fourth place after Caught, Bowled and Leg before wicket. In ODI and T20I matches, where defensive strikes are practiced less often, and the risk of removal during runs is higher, Run out is the third method of removal, which the referees most often record.

In youth cricket and in games that are held under the roof, a curious kind of Run out is often recorded when a batsman intentionally leaves his crease to talk to a non-striker or check the condition of the pitch after the ball is drawn. A mandatory condition is that there is an understanding with the opponent about the status of the ball (No ball); otherwise, the attacking team has the right to appeal, and the batsman will go out.

Another interesting addition to the Run out rule concerns the so-called reserve batsmen who are in the game but do not hit the ball in a particular episode. Usually, they leave their crease, moving to another part of the pitch in case the partner decides to run.

The rules do not prohibit this, but if the second batsman leaves the popping crease before the moment of serving, the bowler has the right to knock him out of the game. If he fails to send the player with the bat out, then the serve is determined as a Dead ball. Significantly, many cricketers consider this practice to be contrary to the Spirit of Cricket, so it is not uncommon to see bowlers warning batsmen of their intentions, suggesting that they stay on the crease.

This is interesting: some episodes of Run out can look quite funny. So, in a test match that took place in Cape Town in 1995, New Zealander Shane Thomson played forward while being out of his crease. After a long pause, the captain of the South Africans, Hansie Cronje, took the ball and broke the wicket with one low throw. And although the cricketer himself was not sure that his act corresponded to the spirit of the game, the judges quickly calmed him down by counting the episode.