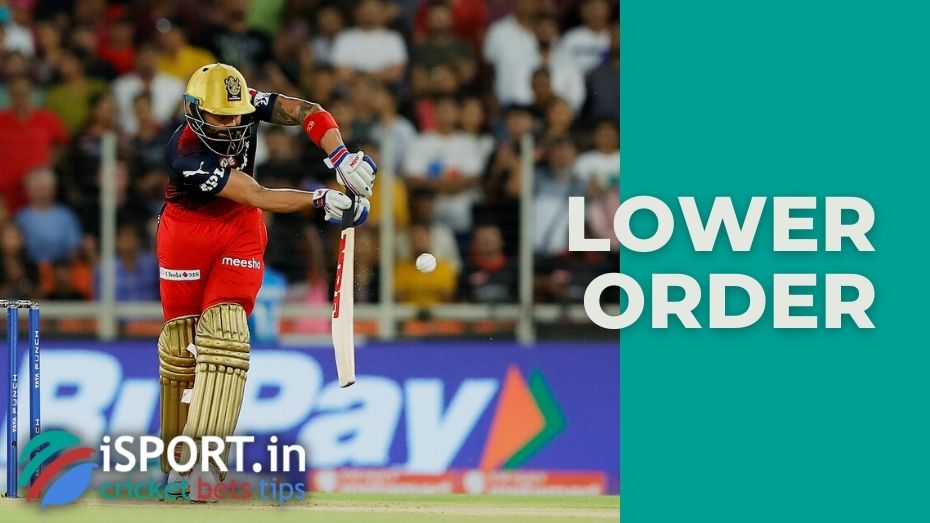 A lower order (colloquially the tail) is a play sequence for hitting bottom (last) order. In this case, the bottom order is for batsmen who batter from the 9-11 position. As a rule, we are talking about non-core players with average or poor hitting skills. They are called tailenders (tail ender or tail-ender) in professional circles.

The order of striking is established before the start of the match but can be violated during the game. This decision is based on various factors: the position of the cricketer, his skills and motivation, team interaction or tactical experience (defensive or attacking plan).

The lower-tier players are usually bowlers, rarely wicket-keepers. Given the consistency, finishing blows may be left to players with insufficient playing time or even debutants. As practice shows, even in such inconspicuous positions, you can start a career in cricket. Steve Smith (going from position 7 to 4/3) and Ashton Agar (going from 11 to 7 in first-class) are prime examples of this.

However, several bowlers have established themselves precisely as inferior players. Position 8 players are especially prized, where many teams feel a lack of reliable all-rounders like Wasim Akram or Jason Holder (both of which have two hundred in Test).

Likewise, some cricketers can and will go down in order. An unsuccessful season, associated with a loss of playfulness or mental problems, often became a reason for the demotion. As an example, we can mention Moeen Ali, who dropped from the 3rd position to 7/8. Ali’s good performance at the Ashes series 2015 brought him back to the top positions.

Thus, finding players in the lower order should not be associated with their skill score. In addition, ODI and Twenty20 matches require cricketers to make decisions quickly, which greatly affects the match’s outcome. In this regard, each member of the line-up is important.

This does not exclude the generally accepted practice of the coaching staff giving cricketers one last chance to prove themselves in lower positions. These players will likely be dropped soon. However, surprises also happen: since their expectations are rather low, any success of such bowlers does not go unnoticed.

Sometimes the scores scored by representatives of the lower order are critical. In a situation where the battering team is far behind on points from the opponent, all hopes are pinned on the “tail” players who can save the game. An example is the 2009 Ashes series, where the last-order English bowlers James Anderson and Monty Panesar robbed the Australian team of victory in the final minutes of the meeting.

Also, the players in the last position (11) are often referred to as “Last Man Jack”. The term turned out to be so apt that it is used in everyday life today. This is because the organization of order in cricket is like a deck of cards, where Jack must follow numbers 9 and 10.