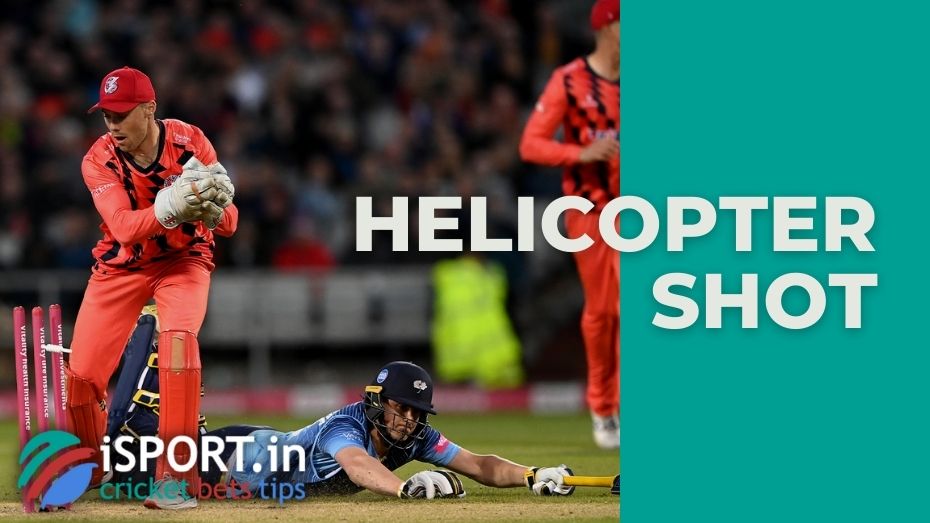 A helicopter shot is a type of cricket shot based on the use of an upward movement with the lower arm as the dominant one. Due to the impact force at the end of the movement, the bit visually bends around an arc, similar to a helicopter propeller. This association formed the basis of the name itself.

The hitting was considered unconventional and innovative until the mid-2000s. However, it quickly gained popularity due to its showiness and efficiency in the case of high-quality performance.

The helicopter shot demonstrates the maximum efficiency when the yorker is reflected. However, the batsman must possess not only the technical element but also a good reaction. Due to the fact that “helishot” is used against the most difficult throw in cricket, it always attracts sympathy from the audience. At the same time, the difficulty of many batsmen with recognizing the yorker when throwing affects the limited use of the helicopter shot.

From a professional point of view, the helicopter shot allows the batsman to hit an upward ball with maximum force, which gives it extra momentum. True, a lack of experience can lead to a mistake, so you need to be ready to move on a subconscious level.

Many cricket fans associate this shot with the legendary M.S. Dhoni, actively using it in the early 2000s. However, its ancestor is Mohammad Azharuddin, who first demonstrated it in a match against South Africa in 1990 at Eden Gardens. The further development of the helicopter shot was facilitated by the most famous players of that time, including Aravinda Silva, Charma Silva, and Kevin Peterson. Still, M.S. Dhoni brought it almost to perfection.

The blow turned out to be so aesthetic in the performance of the Indian that it is not only entered his arsenal but became a “visiting card”. M.S. Dhoni also owns the most famous helicopter shots: the first is captured against James Faulker at the ODI match in Bangalore, the second against Lasith Malinga’s at one of the IPL meetings.