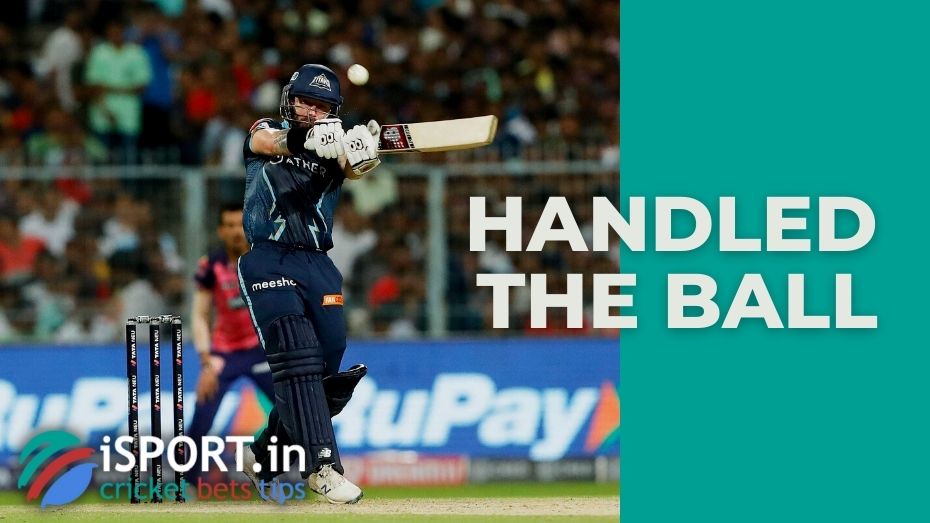 In cricket, there are a huge number of rules that regulate the game itself. Anyone can get acquainted with them; there is a huge amount of materials on this topic on the Internet (and on our website). Among the rules, there are also quite unusual ones that are used very rarely. One of them is “Handled the ball”. This term has long been known to cricket fans, but it was used very little in practice. In this article, you will learn everything about this definition: the history, application and even the TOP 5 interesting cases of “Handled the ball”, which seemed the most vivid and very unusual to us.

Handled the ball: what does this term mean

If we briefly define the concept of “Handled the ball” in cricket, it will look like this:

Handled the ball is one of the ways to dismiss a batsman during a match when he intentionally touched the ball with one or both hands not holding the bat.

An exception can only be the case when the batsman touched the ball to avoid injury if it would not have been possible to do this in any other way. However, this method of dismissing a player does not bring any bonuses to the bowler: points for a wicket, in this case, are not counted.

Handled the ball: the history of the term

As a method of dismissing batsmen, “Handled the ball” was incorporated into the original Laws of Cricket in 1744. The document said the following: “If you, a Striker, touch the ball or take it before it is completely motionless unless a Bowler or a Wicket-Keeper asks you, you are out of the game.” A similar wording remained after the revision of the laws thirty years later.

In 1950, an important addition was made to the “Handled the ball” rule, which allowed judges not to remove a batsman from the field if he touched the ball to protect himself from injury.

In March 2017, the MCC announced that the “Handled the ball” rule would be completely removed and included in the field blocking law. This means that batsmen will still be dismissed because of this violation, but now it will be recorded as an obstacle to the field. This law came into force on October 1, 2017.

In general, “Handled the ball” is considered quite rare in cricket. Moreover, it can even be called an accident since athletes often take the ball with their hands just reflexively, not intending to break the rules. In total, there have been 61 cases of batsmen being dismissed for this reason in first–class matches in the history of cricket, and there are 5 cases in the A-list of games. The first cricketer dismissed under this rule in first-class cricket was James Grundy. This event occurred in 1857

Handled the ball: A list of batsmen dismissed because of this in international cricket.

In international cricket, batsmen were also dismissed because of “Handled the ball”; this happened only ten times. The first of the cricketers removed for this reason at international matches was Russell Endean, and the event occurred on January 1, 1957. In this match, he faced Jim Laker face-to-face. He threw the ball away, but it jumped off the athlete’s pads, flew into the air and moved towards stumps. Endean pushed the ball away with his free hand before it could hit stumps. The judges argued among themselves for a long time about what to do, but in the end, they decided to remove the batsman.

We have told only about the first case of using “Handled the ball” in international cricket. And here is the full list of moments when this rule was used to dismiss batsmen:

As you can see, “Handled the ball” is really a rarity. But if you bet that the batsman will be removed for this reason, and this happens, you can win a tidy sum, even if you bet only a couple of dollars. But the chance to guess is just very little.

Handled the ball: the five most interesting cases of dismissal

Of course, in the history of cricket, there are also particularly interesting cases of dismissal of batsmen because of “Handled the ball”. We can’t tell you about each of them; after all, it’s quite a long time to describe absolutely all the cases, but we will tell you about the five most interesting dismissals. Perhaps some of this you never knew.

By the way, there are videos with the above-mentioned “Handled the ball” on the YouTube video service. Just enter the player’s name, assign a term next to it, and the service will give you the necessary video.

Now you know almost everything you need about “Handled the ball”. We hope that the world of cricket has become even more interesting for you.