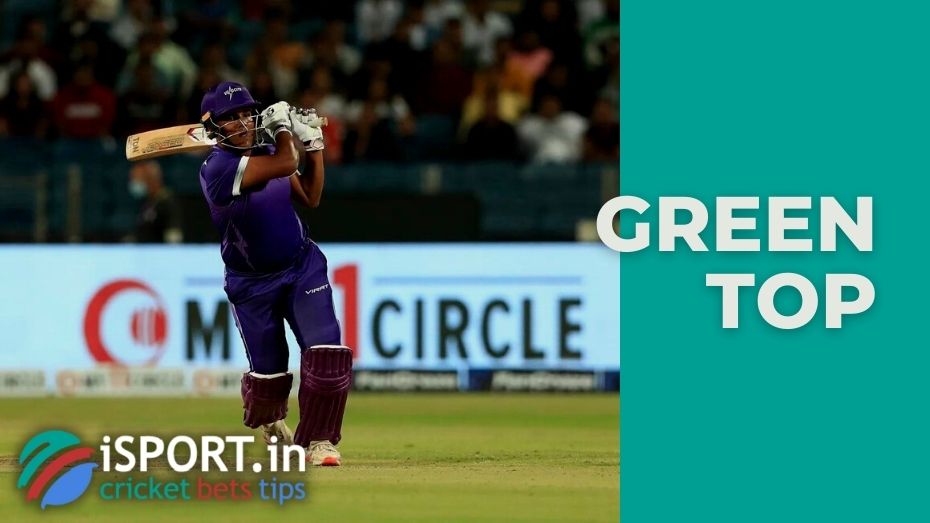 Green top (also green pitch, green seamer) is a cricket ground with natural grass. As with other types of venues, additional processing is not allowed during matches, as this can change the course of the game. However, such a coating wears out faster than others: for example, the grass can practically disappear by the twentieth over.

The green top has several features that distinguish it from other coatings. So, suppose dry and dusty grounds are suitable primarily for spin bowlers, whose strong point is ball spin. In that case, the Green top is often called the “paradise of fast bowlers” since they allow attacking players not only to move faster but also to confuse more often enemy batsmen who find it difficult to keep track of the sliding ball.

Each of the coatings has both advantages and disadvantages. For example, dry pitches dry out quickly and crack, which, on the one hand, provides good traction of the ball to the ground, but batsmen often call them a “minefield” due to the unpredictability of the bounce angles.

As for the Green top, its pluses include:

However, the green top has its drawbacks – high wear and insufficient ball adhesion to the surface. In addition, grass pitches tend to dry out quickly, so batsmen who can handle the onslaught of enemy fast bowlers are quite capable of turning this into an advantage. And yet, it is the Green top that allows attacking players to reveal their best qualities – speed, accuracy and refined reaction.

As a rule, the fiercest cricket battles unfold on grassy grounds, leaving both sides no margin for error. One of the most famous was the test confrontation between England and Ireland at the legendary Lord’s in July 2019. Its outcome was largely determined by the state of the local Green top, which the captain of the Englishmen Joe Ruth later called “at least inappropriate”, saying that this put batsmen and bowlers in a notoriously unequal playing field. The match lasted three days and ended with the home team winning 143 runs, but the Irish not only managed to set several records but were also close to making an insurmountable gap in the first half of the game thanks to the state of the Green top.

Thus, the state of the professional cricket court cannot be overemphasized. It is well understood in the MCC. Therefore, separate clauses have appeared in the basic rules that provide for penalties for a team whose players deliberately spoil the field. So, the punishment is provided in cases when the referee fixes potentially dangerous for the opponent’s batsmen serves or attempts to damage the surface to impede the movement of bowlers. Such attempts are especially harshly suppressed during multi-day matches: it can be seen that during such periods not only referees and players are involved in monitoring the state of the field, but also sports commentators.

The choice of the site is the area of ​​responsibility of the curators. For example, Samandar Singh Chauhan, one of the leading curators of BCCI, explains:

“The first thing to remember is the format of the game. The second is which teams will take part in it. The first is especially important because no one wants the bowler to strain on the field in the end without really showing anything. The fans need a spectacle. So yes, the curators choose the sites, but the captain can, if desired, contact one of them and explain which coverage he considers preferable. Of course, much depends on the country that hosts this or that match – for example, in Australia, they like fast courts, the standard length of grass on the pitches for test matches there does not exceed 10 mm, ODI is 8 mm.”

Grassy grounds are most common in England, Australia and the Republic of South Africa.

It is interesting: Green top is also called the “batsmen’s graveyard”.

You can bet on your favorite team with Jeetwin promo code.