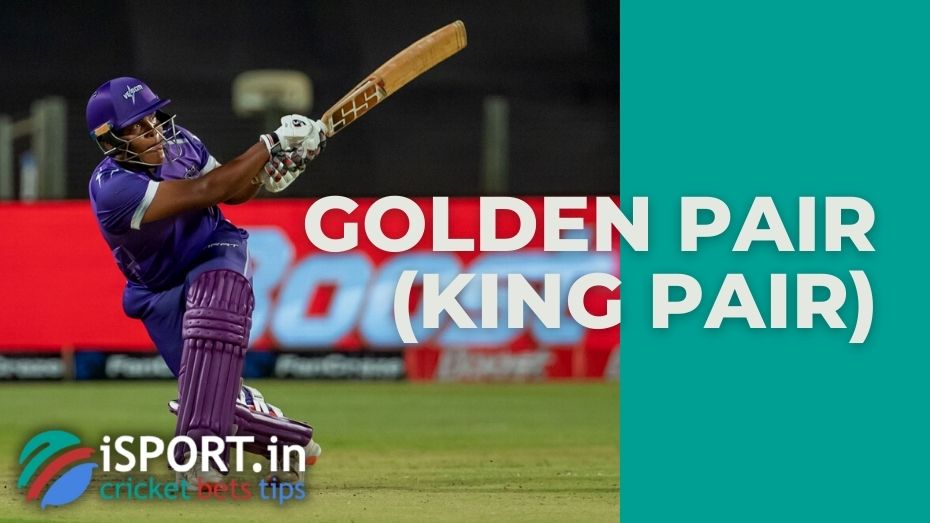 A Golden Pair (King Pair) – this may sound honorable. These words are pronounced sarcastically and mean a complete failure of the batsman in cricket. Let’s talk about what the term King pair means in cricket, who was awarded this “honorary” title and what other pairs are there in cricket.

What is a king pair in cricket?

The term “pair” in cricket refers to a situation where the batsman is dismissed in both innings as Duck (zero points). The situation when a player is knocked out from the first ball in the innings is called the golden duck.

But if the batsman is knocked out from the first ball in both innings, such an unfortunate situation is sarcastically called the King Pair. Another name is Golden Pair.

The King Pair is perhaps the most unpleasant of the many possible humiliating and unpleasant situations in cricket.

When did the term King pair appear?

The first player to be disqualified from the first goal in both innings and not earned a single wound for the team was Englishman William Attewell.

William played for the Nottinghamshire County Cricket Club and was also called up for the England national team. Playing as a bowler, he was famous for accurate and economic strikes, but he was ineffective against the Australian players of his time.

He entered the field for the first time in Nottinghamshire thanks to a strike by the team’s top players, and he made a splash in 1884, taking 100 wickets in less than 13 runs each (100 wickets for less than thirteen runs each).

At the international level, he has never been able to consolidate his position, and he played only 10 matches in test cricket. As a batsman, he went down in history as the first player to receive a royal pair.

How many players did the King pair earn?

At the moment, twenty-one cricketers in test history have such a dark page on their resume.

Of course, the royal couple is rare. To date, more than 2,500 cricket matches have been played, but only 21 players have been knocked out in both innings by the first shots during that time and covered themselves with shame.

One could assume that a significant part of such situations happened before the First World War when the modern rules of the game were not yet fully formulated; there were only four such situations at that time. The next one falls in 1936 (Robert Crisp), and then it took a whole 19 years before another player did this feat again (Ian Colquhoun).

Dave Richardson, who later took over as ICC’s (chef executive), became the tenth player to face this disgraceful situation. A significant proportion of royal pairs took place in the 21st century: over two decades, ten cricketers have been knocked out from the first ball in both innings. For all the time, most of the batsmen were knocked out in this way by players from Australia (6) and Pakistan (6).

As you can see from the table, the black list of batsmen who received the royal pair includes not only unknown players but also those whose names are inscribed in cricket history due to outstanding achievements:

What other couples are there in cricket?

In addition to the King Pair (Golden Pair), there are also the following combinations:

Although the Golden Pair is an unpleasant situation, it is by no means a verdict.