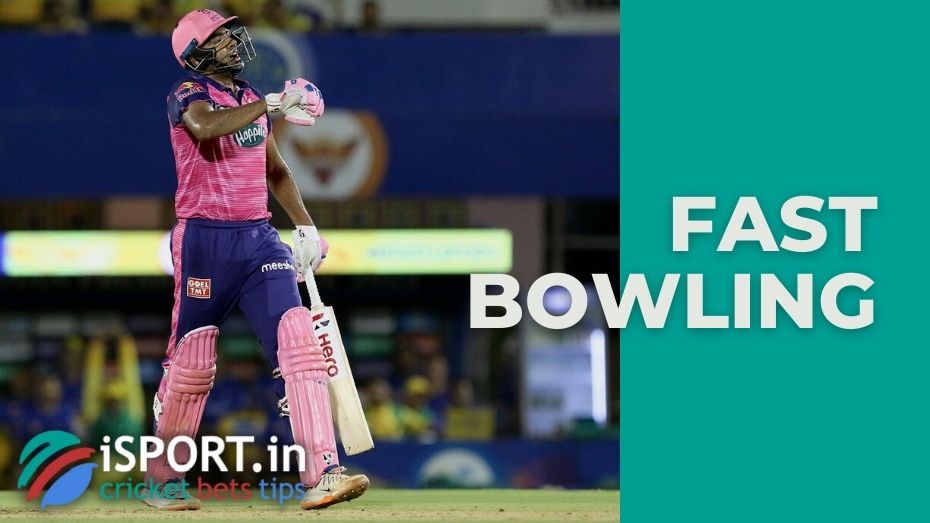 Fast bowling is the most common way to deliver the ball to the batsman. Along with spin bowling, fast bowling looks very nice and professional. There are several methods on how to serve balls using this method. In this article, we are discussing exactly these methods.

All cricket players and fans know that the bowler’s main job is to pitch the ball so that the batsman cannot hit it. In cricket throughout history, various techniques have been invented, which can be difficult for a batsman. Fast bowling or pace bowling is one of 2 ways to serve the ball used in modern cricket tournaments.

Fast bowling players are often referred to as fast bowlers, quicks, or pacemen. But this does not mean that such a player moves quickly during the throw. Naturally, he has speed, but here the emphasis is on fast and correct hand movements.

With these serves, the bowler can be categorized according to the speed of throwing the ball:

In addition, the serving players are also distinguished by the technique they use when they serve the ball. Now we will try to understand the intricacies of such feeds.

Grip. Let’s start with the most important thing – the correct capture of the ball. Basic toe position for fast bowling: Hold the ball upright with the index and middle fingers on either side of the seam while the thumb squeezes the bottom of the seam. The ball is held freely, and it should easily fly out of hand. As for the second hand, it usually covers the hand that is squeezing the ball. Bowler removes it at the very last moment of the throw so that the batsman cannot see what kind of serve awaits him.

Action. At the end of the run, the ball carrier puts his dominant foot on the straight knee as much as possible. This position of the leg increases the speed of the ball, but there are also negative aspects – injuries. Knee injuries are probably the most common injury in cricket, along with shoulder dislocations.

English bowler David Lawrence broke his kneecap in a test match against New Zealand in 1992. According to viewers, the sound of his knee sounded like a pistol shot. Unfortunately, he could not fully recover, and at the age of 29, he was forced to leave the big cricket.

Also, at the end of the run, the bowler’s arm is lifted up over his head, and the ball is released at a certain height. The main rule is a straight hand. Flexion at the elbow makes it too easy to aim at the batsman’s wicket accurately.

Follow through. After the ball is already flying on its trajectory, the bowler continues to move by inertia. He must stop so as not to trample the pitch again. The referees can issue three warnings and then prohibit the player from participating in the serves.

Any throwing player, with each throw, develops the accuracy of the throw. Fast bowlers, who manage to be as accurate as possible in their serves, are considered a true pro. Such a player is very valuable to the team.

The server must focus on two important aspects: line and length to consistently hit the same spot.

Usually, in modern cricket, bowlers allocate two lines within which the ball can fall (two imaginary parallel lines going to the bowler from the 1st and 3rd stumps). For batsmen, this area at the wicket is called the corridor of uncertainty. If the bowler throws the balls along these lines, we can confidently state that this will cause some inconvenience to the batsman.

As for length, there are no special restrictions here. It all depends on what the serving player prefers (how high he wants the ball to rise after the rebound, so he considers the length of the ball’s flight). For example, if the bowler wants a short bounce off the ground, the ball should land close to the batsman’s feet.

Strike bowling is a term that means that the bowler, in his serves, only aims at knocking out wickets. Such a player does not care how the batsman will hit the ball; the main thing is to achieve his goal. For such ideas, various methods of ball delivery have been invented. Let’s briefly describe them.

Bouncer. This is how the ball is called in the competition, which lands in the first half of the pitch. It means that after the bounce, the ball has time to rise to the level of the batsman’s chest or head (talk about the length). Such delivery causes rash actions on the part of the batsman. A person is designed so that if the ball flies into his head, he will reflexively hide from him. A common reaction is when a batsman hides under attack while hiding behind a bat. Because of this, the receiving player can inadvertently hit the stumps with himself or with part of the bat and hit the ball so easily that it will not be difficult for the field players to catch it.

Slower ball. This is the name given to a ball that is delivered at a normal pace, but at the same time, the grip of the ball is slightly changed (the thumb also holds the lower part of the seam, and the index and middle fingers are slightly farther from the seam). Such a grip misleads the batsman since he sees from his movements that the ball will fly at high speed, but it happens differently. The slower ball flies to the bottom of the bat, to the holding hands. There is often a clean hit to the wicket or very weak ball reception with a slower ball.

Yorker. With this throw, the bowler’s ball bounces off the pitch straight to the batsman’s feet. In a normal stance, the bowler does not keep the bat close to the ground. Because of this, the ball can fly abruptly and quickly next to the legs or hit the gap between the legs, thereby beautifully for the audience to break the opponent’s wicket. But, getting such a feed is very difficult. For this, the bowler must be highly accurate.

The term fast bowler also includes other well-known methods of delivering the ball. You can find more detailed material about each of them on other pages of our site. But in this article, we will briefly analyze them.

Seam bowling. As the name suggests, the seam of the ball plays an important role in these serves. The most important thing to know about seam bowling is that when hit by the seam into the ground, the ball can apply such an unpredictable trajectory that the batsman will not have time to do anything.

Another important factor related to seam bowling is the pitch state. Hard fields with cracks or bumps are best for these pitches (as hardness helps the ball bounce off the pitch without losing speed, and the uneven surface adds more random bounce).

Cutters also refer to such throws. The Cutter is a fast swing feed. The seam plays a big role here. Thanks to him, the ball flying through the entire pitch can deviate slightly from its original direction and change its trajectory after bouncing off the ground. To get such a throw, you need to hold the ball in your own way (read more in the article cut and cutter).

Swing bowling. These throw cause the ball to move from side to side through the air. When throwing, there is specific handling of the ball. The bowler, who throws such balls, constantly polishes one side of the ball (it is important that only one). So, it protects it from rapid wear, which cannot be said about the other side. Because the second side becomes unusable faster, this results in reverse swing feeds.

Typically, the ball tackle is used as with standard fast bowling serves. Dippers are a swinging ball tossed as a full toss (no bounce) or a yorker (to the feet). These shots are also very dangerous and lead to a good result for the serving team.

Intimidatory bowling. This tactic is also the case in professional cricket. But excessive use of intimidatory bowling can lead to certain sanctions from the judges. The most classic approach for these throws is to hit the batsman in the chest. Such a ball forces the batsman to defend (initially, all batsmen are set up to hit, and it may happen that he does not have time to readjust to defense).

Fast bowler uses intimidatory bowling to intimidate the battering team (to make the batsmen get angry and lose their temper). Sometimes, such throws inflict various kinds of injuries on the batsmen. Therefore, repeated use of intimidation tactics is considered not entirely professional for elite and famous bowlers. Today, there are certain restrictions on intimidatory bowling, and on special occasions, the match referees can exclude the bowler from the game.