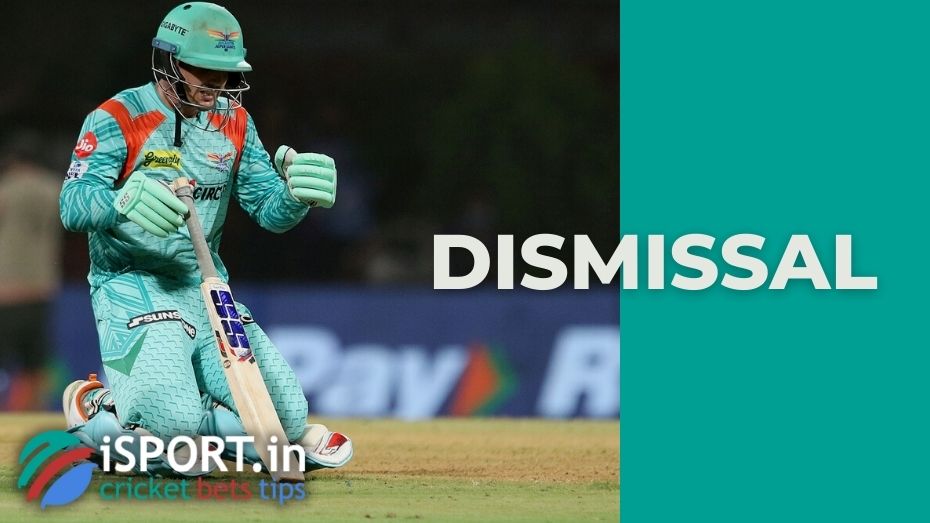 Dismissal is a famous and unpleasant word for any batsman cricketer. When a player hears him, it means that he will have to leave the field in a moment. At this time, the batting side loses the wicket, and it passes into the possession of the fielding side. A knocked-out cricketer will only be able to return to performance in the next inning.

When the batsman leaves the field, the ball is dead. Until the next throw, players are not allowed to perform any technique. The inning for the team continues until 10 players have been knocked out. Note that 11 people play cricket, but since this sport involves interaction in pairs, one cricketer cannot help his team. There are times when some cricketers stop fighting early, most often due to injury. For the fielding side, a batsman is considered a good sign to knock out quickly. This means that the throwing team does not allow the opponent to get a lot of runs.

There are several surefire ways to be dismissal in cricket. Let’s mark the most popular ones:

Some methods can be carried out together. For example, leg before wicket and stumped. At the same time, these are not the most popular options. The surest way to knock out a batsman is bowled.

It is correct if the players themselves are the first to inform about the elimination of the batsman, and the referees only approve the decision. The standard of sporting behavior is if, in obvious situations, the batsman himself leaves the field, knowing that he has been knocked out. This behavior is called “walking”. True, not all cricket experts approve of it. Some believe that players should turn to the referees, who will make the final decision. Only then the cricketer leave the field.

There have been cases when the referees mistakenly agreed with the players and changed their decisions after a moment. This was the case during the Lord’s test match, in which the national teams of England and India met in 2007. The referees were ready for Kevin Pietersen from England to leave the field. But on the TV replay (seen on the stadium’s big screen), it was noticeable that the ball bounced off the lawn before being taken over by MS Dhoni of India.

Dismissal: the popularity of methods

Sometimes the batsman can get out of the game without even serving from the bowler. This happens when the field players are thrown at the wicket. This is called a diamond duck. Let’s note the ways in which batsmen are eliminated from the game after bowlers’ throws:

In cricket, there are many options for dismissal. Usually, cricketers do not choose them but act according to the situation.