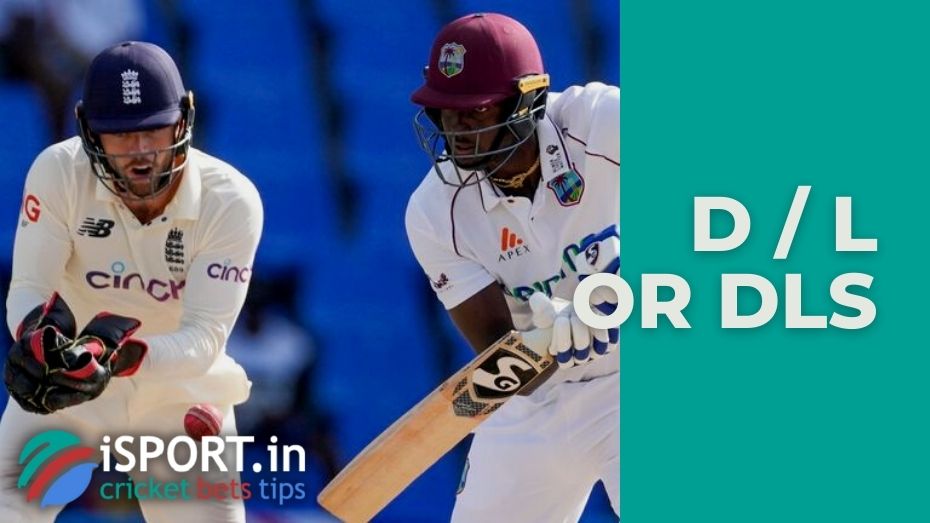 D / L or DLS in cricket encodes the Duckworth and Lewis method, which is used to calculate the target score when the hitting second team cannot end the session due to a stoppage of a limited shot match. Most often, pauses occur due to rain. Statisticians developed this method from England Frank Duckworth and Tony Lewis.

In limited-overs matches, each team has two options for scoring:

In the case of lost overs, it is often difficult to establish an adjusted score. It is easier to reduce your run count in proportion to your overs loss. A team with 10 wickets and 25 overs can act sharper than an opponent with 10 wickets and 50 overs. The D / L or DLS method allows you to set a statistically fair goal for the second team’s inning based on the first team’s score.

This mathematical calculation was presented in 1997O. The International Cricket Council officially approved it in 1999. For a long time, it was known as the Duckworth and Lewis method. After the specialists retired, Professor Stephen Stern became responsible for this mathematical calculation. Since November 2014, it has been called the Duckworth – Lewis – Stern method (DLS).

Until 1999, cricket used different methods to determine the results of matches. The most popular was the Run Rate method. A little later the Most Productive Overs method was more trusted. These systems had certain drawbacks. So, the Run Rate method did not consider how many wickets a team lost in a certain time, but reflected the players’ performance. Often, teams, expecting a stop due to bad weather conditions, simply improved their performance, not really worrying about losing the wicket. The Most Productive Overs method also did not take into account the number of lost wickets. In addition, in the second case, the best overs of the second team were ignored. In both methods, revised targets were used, which did not accurately restore the match’s situation before the pause.

Frank Duckworth was born in Lytham St Annes in 1939. After leaving school, he actively studied physics, earning a bachelor’s degree in this field and then earning a doctorate in metallurgy. Then he built a successful career as a mathematician. In the 1980s, Duckworth became a consultant to the International Cricket Council. Frank worked in this position until 2014. At the time of this writing, he is 81 years old, he is a pensioner.

Tony Lewis was born in Bolton in 1942. He graduated from the University of Sheffield with a degree in Mathematics and Statistics. For a long time, even in retirement, Tony taught quantitative research methods at Oxford Brookes University. He only retired from the university in 2008. One of the D / L or DLS method founders has also been involved in other major projects. For example, he was a keynote speaker at the Second International IMA Conference, where he talked about the impact of mathematics on sports. In the spring of 2020, Lewis passed away.

In the 1980s, Lewis responded to the suggestion of Duckworth, with whom they were born in the same region, and began to reflect on changes regarding a new method that could be used in cricket after the breaks. After the 1992 World Cup, commentator Christopher Martin-Jenkins took a close look at the issue when he commented on the England vs. South Africa match. As a result, this speech was heard by Duckworth, and his joint work with Llys began from that moment.

The essence of D / L or DLS is “resources” (the number of overs and wickets). The ability to recruit early depends on the state of two “resources”. Often in matches, you can trace the dynamics between “resources” and the final result. Thanks to the Duckworth and Lewis method, the amount of remaining resources is converted into a percentage. 100% is 50 overs and 10 wickets. The target score for the team that hits the ball after the first one can be adjusted up or down depending on the total amount of resources received by team 1:

When judges use the D / L or DLS method, they will mark the changes to the scoresheet with the “Professional Edition”. For clarity, we will give an example. If team № 2 used only 80% of the resources, and team № 1 – 100% and scored 200 points, then the following scheme works: 200 × 80% / 100% = 160. This means that to win the match, team № 2 needs to score 161 points. The demonstration of the D / L or DLS method is not publicly available. Therefore the Professional Edition must be installed on the computer to calculate the points.