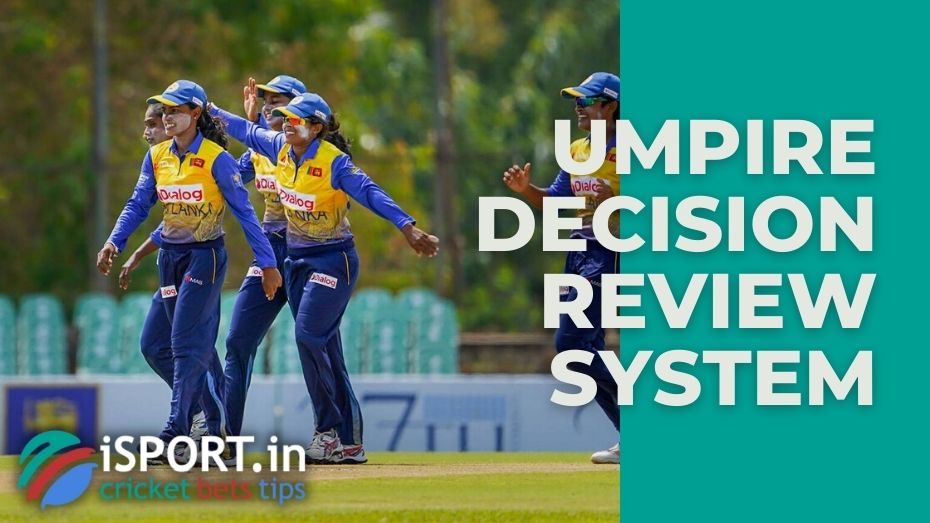 As a rule, telerepeat data, technologies with the help of which the trajectory of the ball is built, recordings from microphones that capture the slightest sounds (for example, the contact of a ball and a bat or a ball and elements of protective equipment), as well as infrared sensors that detect temperature changes are used in controversial situations.

The nominal predecessor of the Umpire Decision Review System is considered to be the telereplay system, which has been widely used in cricket since the first half of the 90s and allowed some particularly difficult decisions to be delegated to a third referee. First of all, this concerned the issues of recognizing or not recognizing an out among batsmen, especially in situations where the field team appealed for the leg before wicket. This article is traditionally considered one of the most difficult, and both the players themselves and the public are often dissatisfied with the decisions of the field judges. To improve the quality of refereeing, lawyer Senaka Viraratna (Sri Lanka) proposed to modernize the existing video replay system. Still, at the time of the official publication of his program, such technical capabilities were not available.

Nevertheless, the author was heard in the ICC, and the first version of the Umpire Decision Review System was tested in the test match India – Sri Lanka a few years later, and it was officially introduced in 2009. Two years later, it was used for the first time in ODI matches (the away Australian tour of the England national team).

Initially, it was planned to make the Umpire Decision Review System mandatory at all international cricket matches. Still, subsequently, the ICC decided to relax the stringent requirements by ruling that the system should only be used as an option and only when both teams agree.

The basic principles for using the Umpire Decision Review System have been revised several times. Thus, the “limit of uncertainty” in the case of the leg before wicket either increased or decreased; in addition, for a long time, sports officials could not determine the acceptable frequency of requests to use the system from players. Ultimately, it was decided to stop at two requests after 80 overs played, and it was additionally allowed to broadcast negotiations between the field judges and their third colleague in 2014.

In February 2017, the ICC decreed that the Umpire Decision Review System would eventually be used in all world T20 events, limiting the number of views to one per team. In the same year, several additional clauses were approved on the use of the Umpire Decision Review System in test matches: the number of views was limited to two per inning for each team, excluding controversial LBW episodes from the list.

As noted, the Umpire Decision Review System can be used by both field judges and players. The former, as a rule, do this in episodes when it is necessary to make a fair decision to remove the batsman, for example:

In addition, the field officials can request assistance in determining the exact score or the place of the ball landing, but they have no right to request additional views in situations when it comes to leg before wicket (this is the prerogative of the field players, like the Not out episodes).

Interestingly, despite all the advantages of the Umpire Decision Review System, it quickly became clear that abuse of this system could decrease the authority of the field judges. The so-called Umpire Call was introduced in 2016 to eliminate such risks, which is used in the most controversial situations. Its main purpose is to prove that the decision taken by the field judges was not unambiguously wrong and therefore can remain valid. So, for example, in the case of the same leg before wicket, it allows you to quickly find out whether the ball hit the line between the wickets, whether the batsman managed to touch it with a bat, and so on.

The third referee makes the final decision only after the controversial episode has been considered from all available angles. Obviously, wrong decisions are canceled, but if the established error is relatively small, it remains in force.

An interesting addition to the Umpire Decision Review System was the additional Judicial Video Review System introduced in 2013. Its main feature is that the third judge, in this case, is in a separate room with a huge monitor and can independently choose which episodes to watch. He does not have a decisive word in revising the decisions of field judges. However, according to the ICC, this should help reduce the number of their errors in the long term.

Although the Umpire Decision Review System has received many positive reviews, some countries are still moving away from its widespread use. Some simply cannot afford such a step due to lack of funds, while others believe that it undermines the authority of the field judges and contradicts the Spirit of cricket itself. Nevertheless, according to official statistics, more than a quarter of requests from players lead to the cancellation of the original decision, so it is hardly worth expecting that ICC will abandon the Umpire Decision Review System any time soon.

Interestingly: due to the growing pace of the coronavirus pandemic in 2020, temporary amendments were made to the rules for the use of the Umpire Decision Review System (UDRS, or simply Decision Review System or DRS). Due to the fact that some countries have imposed severe restrictions on air travel, it was decided to abandon the invitation of neutral judges and increase the number of views per test inning from two to three.