Textbook shot: a complete review of the cricket term 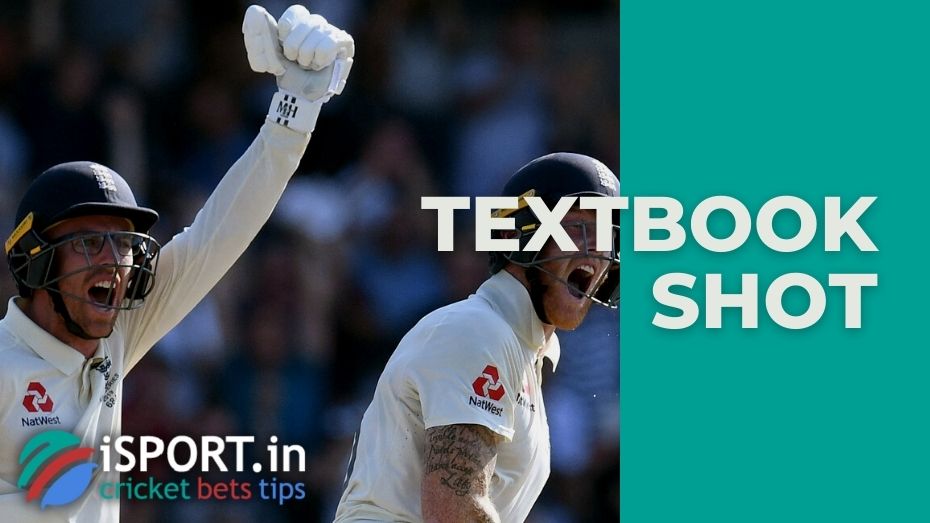 The world of cricket is rich in terminology. And to fully understand what is happening on the field and the commentator’s words, it is necessary to study the terms thoroughly. Some of them are quite simple, and some are complex and confusing. This article will break down a very simple and not so common term – the Textbook shot.

From the name, it is clear that it refers to cricket strikes, but the phrase itself looks very unusual. We will give a detailed definition of this concept and talk about modern players who can execute the Textbook shot.

Cricket has evolved a lot in recent years, many new techniques have appeared, and batting has transformed. However, before the T20 and other stripped-down match formats came along, the emphasis was on traditional shots. The players, including the coaches, tried to follow the fundamentals of the cricket textbooks strictly. This was the skill. Actually, this is where the concept of the Textbook shot came from.

The textbook shot is a cricket shot made by batsmen with perfect, perfect technique. Exactly as the textbooks say.

It takes years of training to be fluent in various hitting techniques. There are cases when batsmen did not show any sporting hopes, but perseverance allowed them to learn how to execute perfect strikes. More often than not, a successful Textbook shot will result in the batsman earning a lot of points for his team.

Understandably, 21st-century batsmen who prefer innovative strikes also have excellent play skills and should be given credit for that. But those who do the Textbook shot are really masters. There are not very many now. We can say that in the 21st century, cricket fans were just lucky to see such players. They add variety to the game, as sometimes soothing play is lacking.

In this part of the article, we’ll take a look at five of the best batsmen who can make the right Textbook shot. And you can share your opinion on this in the comments and give other examples of similar batsmen.

He is one of the most famous batsmen from New Zealand. He is cool and focused on the pitch, almost always Kane Williamson takes responsibility for helping New Zealand out of trouble, and he usually does it with ease.

At the same time, this athlete has answers to long feeds, short ones, and any other types. This is accomplished by Kane Williamson’s control of the balance of his body. In addition, the New Zealand captain is a master of one of the most underrated skills of modern cricket – rotation of strike, which he regularly uses.

Another outstanding skill of Kane Williamson is to play the ball as late as possible, to allow him to get as close to the athlete as possible. This skill allows Williamson to hit balls effectively.

Kane Williamson was considered the best cricketer in New Zealand at 29, and he is not losing ground. Most likely, the athlete will be among the best batsmen of all time. Textbook shots from it look really great.

Interestingly, the participation of this Indian player in the national team was questioned until he became an opener. But his career is fine now. Rohit Sharma is the vice-captain of the India men’s national cricket team in a limited-overs format. Cricket fans associate the term “Lazy elegance” with him, thanks to his style of play and the light punches he makes.

When Rohit Sharma takes a hit, it feels like he always has an extra second to spare, unlike other batsmen. He is one of the few modern cricketers who feel comfortable on the field against the short ball and can send most of these innings to the stands. He takes the ideal position for a strike in a split second during a short ball and perfectly realizes his plan. Of course, Rohit Sharma is great at working with other types of shots, but he looks especially elegant when performing a pull shot.

It is clear that as a player who has accumulated more than 14,000 runs in his career, he can easily do other Textbook shots (for example, a straight drive or a cover drive). In addition, Rohit Sharma is the most successful captain in the IPL. He also actively supports animal welfare campaigns, for which he earns additional respect from cricket fans.

For many cricket fans, Australian Steve Smith is the genius of modern batting. He possesses a very strange and unique technique that caused cricket experts to predict early on in Steve Smith’s career that he would not last long with her. However, as it turned out, they were all wrong.

In cricket textbooks you will not find the extraordinary shuffling that Smith uses before bowling the ball. But the process that follows after shuffling is quite important. The athlete does everything right in strict accordance with the textbooks, just like a batsman should do. In addition, Steve has impeccable hand-eye coordination, which makes it easier for him to strike.

Why is a player with a strange technique included in this list? It’s simple: its movements are absolutely precise, which matches the characteristics of a Textbook shot. Steve Smith is known for his concentration, which helps him hit balls successfully over a long period of time. In addition, the athlete is consistently ranked as one of the best test cricket players in the world, according to the ICC rankings. And even the ball-tampering incident did not greatly affect his career.

The takeoff story of this Pakistani player began on May 31, 2015. Then Babar Azam performed under the fourth number against the Zimbabwe national team and scored stroke-filled 54 off just 60 balls. From that moment, it became clear that the batsman had a great future, and he mastered the technique remarkably.

By 2020, Babar Azam will have become the captain of the Pakistan national cricket team in all formats. Some of his punches go down in the history of Pakistani cricket. Not only is he Pakistan’s most technically accomplished batsman in years, but he was also ranked №1 in the ICC rankings of the best batsmen in ODI on April 21, 2021.

And all thanks to the fact that Babar Azam makes the Textbook shot. His punches, amid some of the absolutely bizarre and incorrect techniques of modern batsmen, feel like a breath of fresh air. Especially the cover drive, which is especially celebrated by cricket fans. Babar Azam transfers weight smoothly to the back of the foot and delivers exquisite cut shots and back foot punches.

Undoubtedly, Virat Kohli is considered one of the ideal modern batsmen. It is not for nothing that former cricketers often rate this Indian athlete as one of the greatest batsmen in the world, and Time magazine named Kohli one of the most influential people in the world in 2018

Interestingly, Virat Kohli shows approximately the same high performance in different cricket formats. He has some very sophisticated techniques like flick shot, controlled pull shot and so on. At the same time, he performs them with perfect accuracy, which is why he got into our selection of cricketers who can do the Textbook shot.

Virat Kohli has a very aggressive playing style on the pitch, but this does not prevent him from possessing strong technical skills. Thanks to his Textbook shot, the athlete has already become a cricket legend, but he is unlikely to stop there.

Now you know all about the term Textbook shot and even read about a few examples. We hope this information will make your viewing of cricket even more interesting and your betting on this sport even more successful.