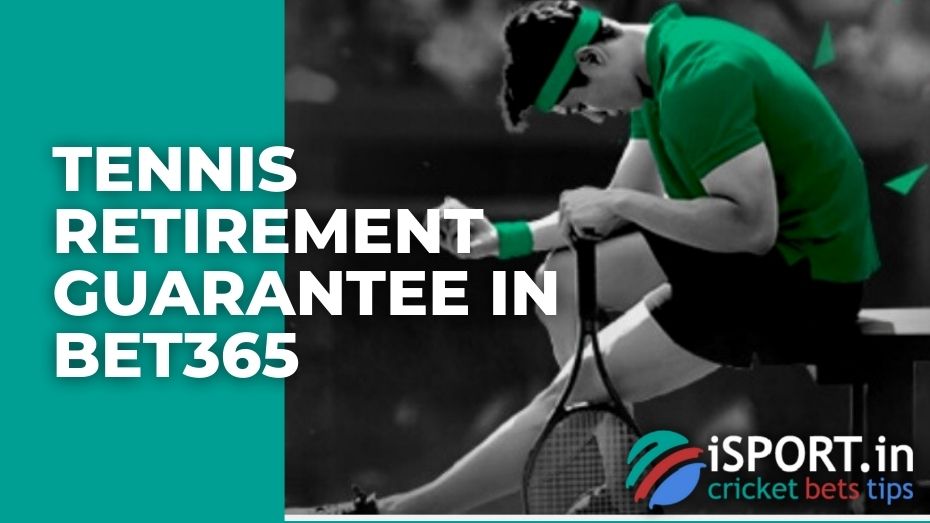 Tennis is a fairly simple game to understand, but everything does not go according to plan from time to time. Sometimes even a winning game ends in favor of the opponent, with which nothing can be done. However, today Bet365 has launched a new Tennis Retirement Guarantee promotion, thanks to which most of the surprises on the court are excluded.

Tennis Retirement Guarantee: how to get it

Those who actively bet on tennis are aware that the situation with the leaving of an athlete due to injury is considered the worst possible. If such happened the tennis player deprives the bettor of profit, allowing him to count on a maximum refund.

However, the launch of the Tennis Retirement Guarantee promotion from Bet365 has radically changed this situation. From this moment, tennis bets are calculated by winning even if the player withdrew due to injury.

Interestingly, the completion of the meeting due to injury will allow you to return the bet in cash and pay profit in the form of bonuses. However, first, the client will have to fulfill a number of the following requirements:

Register and pass verification, since only authorized bettors who have confirmed their majority can make bets on the Bet365 platform. For this purpose, it is enough to register and provide passport data.

Deposit using any of the available methods. Among other things, the minimum deposit will be enough to receive a welcome bonus of up to 30 USD. However, it is necessary to create an account by clicking on our Bet365 promo link.

To make bets on tennis according to the terms of the Tennis Retirement Guarantee promotion, which will be discussed later.

As part of the promotion, bets of the following type are taken into account:

At the same time, Bet365 allows betting on bonuses (Freebet) as part of the Tennis Retirement Guarantee promotion. However, the refund will take place differently in this case.

If a player has completed his performance due to injury, the organizer will calculate the bet as a winning one as follows:

In this case, the bonuses are credited to the bonus account, after which they can be used to make a bet.

In the future, the player can use the received amount of bonuses at his discretion in whole or in part.

It is also worth noting that the account inactivity for 90 days cancels the bonuses received. Inactivity also means playing exclusively in the “Casino”, “Games” or “Poker” sections.